For Tyrone Leslie, it’s all about the journey.

Knowing full well that the home-buying endeavor is often among the most hectic stretches of a customer’s lifetime, the president of Heritage Homes is driven to anything and everything that’ll help clients navigate the A-to-Z minefield with maximum memories – and minimum migraines.
Toward that end, a fundamental step for him is simply knowing his audience.

And in most cases, that means knowing the women.

Heritage is the lone builder in its geographic territory – the city of Fargo, N.D. and its immediate surroundings – that’s labeled itself a “women-centric organization,” which means it has tailored elements of its proprietary “Right Way Home” process to the realities of what’s important to whom.

“It all plays a part in the journey of building a home with us, and in the livability of our homes – understanding our customers – that’s a big deal,” Leslie said. “With 91 percent of our customers, the women are making the decisions. They’re usually the ones saying ‘Yep, I want it,’ or ‘No, I don’t.’ Only 9 percent of the decision-makers happen to be men. When we see that, we’re going to adjust for that.” 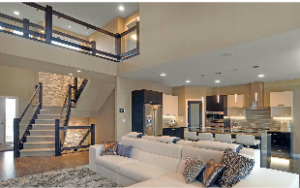 Process stages include Creating Your Vision, using real estate knowledge and an in-house designer to present option packages; Building Your Team, bringing together the project coordinator and the builder to establish a communication framework; On-Site Meeting, a complete tour and electrical walk-through; Finalize Details, a complete and thorough expert inspection; Service Team Tour, a formal tour with a Heritage Homes service team; Your Closing Kit, presentation of a one-of-a-kind closing kit that includes keys; and Long-Term Contact, options for 10-, 60-, 180- and 365-day service contacts and renovation.

Specifically, Heritage considers the female’s style and family management tendencies and her typical daily routine, then designs a home around those basics while considering bullet-point items like storage and organization, entertaining preferences, flexible-living spaces and areas for de-stressing.

“The more that we can understand the languages and the different personalities, and the more that we understand the lenses through which people look at houses – so we can better articulate how that home has to be livable for them – it makes a difference,” he said. “Compared to how we used to sell and how most builders sell, and how we sell now, we’ve really hit the mark.

“They feel that they’re being heard. We’re building a home around how they live.”
The company and its methods sprang from the Canadian-born Leslie’s lifetime in and around real estate and construction, which began when he’d accompany his father to job sites as a 6-year-old. He ultimately chose to eschew college and head first into the family business and later into a stint with the second-largest home building operation in Western Canada.

His mother, father and brother moved across the border from Winnipeg to Fargo to open a Ramada Plaza hotel in 1992, then started Heritage Homes as a side business in 1995. Leslie himself headed south in 1998, with designs on transforming the company from a dabbling interest to a full-blown operation.

He purchased the company outright in 2006.

And these days, the mere mention of his 26 team members yields a torrent of pride.

“Our company is not about any one person,” Leslie said. “It’s about a team of people that are passionate about what they do, love what they do and we celebrate each other’s involvements all the time. When we win, we celebrate our wins. When we lose, we all understand that we all lose, it’s not about pointing fingers. Why did we lose, what can we learn from it and let’s make sure we don’t do that again.”

Though it maintains a single office in Fargo, Heritage’s project footprint extends across a 50- to 60-mile radius to the Detroit Lakes area in neighboring Minnesota and it now builds between 60 and 70 homes per year, which Leslie said should mean a 2015 revenue of anywhere from $24 million to $27 milli
on.

The production number upon Leslie’s full-time arrival was typically between 10 and 15. Still, while tangible growth has been an obvious objective since those days, it’s not a grow-at-all-costs mentality.

“Our primary focus is not units,” he 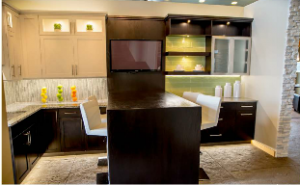 “It’s doing what we can that ultimately services and feeds our goal, which is to positively influence people’s lives every day. We want to make sure when we’re given that honor to build a home – which is still the American dream – we’re very, very passionate about that and we don’t take that lightly. So our goal is not just to pound them out and look at the bottom line. It’s actually quite the reverse.

“We don’t believe anyone provides a better journey than Heritage Homes.”

Leslie said the typical Heritage customer is anywhere between 25 and 60 years old and is looking for homes in the price range from $320,000 to $600,000. Thanks to a diverse and thriving professional economy across Fargo and its surroundings – Forbes magazine recently ranked it second among major cities with low unemployment rates (3.5 percent) – those price points have yielded a mix of first-time buyers alongside experienced buyers moving up to their second and third homes.

Modern loft designs on the exterior have become a popular choice among recent buyers, he said, while an aim for enhanced interior “jewelry” – functional kitchens with upgraded appliances, granite/quartz countertops and ceramic tile backsplashes, home theaters and technology-centric products – is also a hallmark of buyers in today’s affluent marketplace.

And as it turns out, an informed, savvy consumer makes the journey easier for the builder, too.

“The more they come to the table knowing what they want, how can we beat that?” he said. “As opposed to customers in the old days who just didn’t know anything and it took them forever just to get their ideas on paper, when people come to us now they know what that want. And with our ability and our service, we can provide them what they want and really help them get to the next level.

“There’s so much more available today that we can really provide them with what they’re looking for.”

WHO: Heritage Homes
WHAT: Custom homebuilder, founded in 1995
WHERE: Corporate headquarters in Fargo, N.D.
WEBSITE: www.HeritageFargo.com 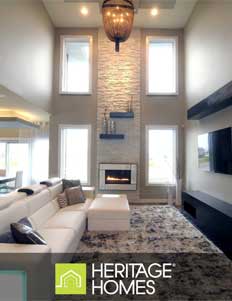