“It’s a very unique space,” declares David Bevans, the Executive Director of the Columbus Georgia Convention & Trade Center. “Architecturally, there’s nothing close to the experience that people get in here.” By all accounts, Bevans is not exaggerating when he espouses one of the main selling points of the historic and culturally significant building that began as the Columbus Iron Works, became listed on the U.S. National Register of Historic Places in 1969, and today is the City of Columbus’ main, municipal event center.

Built in 1853, the Columbus Iron Works was already manufacturing a wide variety of merchandise, including kettles and ovens, brass castings, cast-iron columns and store fronts, sugar, grist, and saw mills, and steam engines to power those mills, as well as the South’s cotton gins and riverboats, when it was called upon to provide cannons and steam engines for the Confederate Army at the start of the Civil War.

Burned by the Union army at war’s end, the Iron Works’ stockholders rebuilt and expanded the facility, eventually turning it into the city’s largest and most sophisticated foundry. By 1880, Columbus led the South in textile production, and many of the spindles and looms in its mills were driven by shafts and pulleys provided by the Columbus Iron Works. On April 11, 1902, the Works burned down again. Within the two block complex, only the 1890s foundry survived. Undaunted by this second destruction, the owners built the massive, new facility which remained unchanged for sixty-five years.

In 1925, the W.C. Bradley Company acquired control of the Columbus Iron Works and attempted to concentrate on fewer, more marketable items such as stoves and heaters in the 1920s, tractor-drawn implements following World War II, and forged parts for other manufacturers in the 1950s. Starting in the late 1940s, the company experimented with barbeque grills. It sold its first “Charbroil” grill in 1953. “It shut down in the early ‘70s,” says Bevans. “The Bradley Company moved its operation to a new plant on the other side of town and sold this site to the City of Columbus, which decided to repurpose the building as a convention center.”

In 1977, the city began converting the Iron Works with $8 million in funds provided by a local beverage tax and federal grant money. Architects and planners were determined to maintain as much of the building’s physical attributes as possible, while still creating a contemporary facility for meetings, conferences, conventions, and other events. “There was an extensive retrofit to add meeting rooms,” says Bevans, “but the foundry workshops were fairly easy to convert – just some rewiring, pouring concrete floors, adding floor boxes, HVAC, and all the modern conveniences. They left the furnace in place where all the metal was forged and we have the gantry cranes still in place. So, there are some neat reminders of the facility.”

Between 2000 and 2003, the building went through a significant expansion. “They more than doubled the size of the meeting space,” Bevans continues. “One exhibit hall was added to connect the two original halls to give it three contiguous exhibit halls – up to 55,000 square feet. They added a 21,000 square foot ballroom, another 6,000 square foot meeting room, and balcony space to overlook the Chattahoochee River, which opened up the river side of the building. Then they added another 9,000 square foot space over the new exhibit hall they built, and refurbished the original north wing of the complex – a two-story wing that gave us an additional seven meeting rooms.”

Today, the Columbus Georgia Convention & Trade Center has over 182,000 square feet of floor space and 17 meeting rooms. All its meeting rooms and exhibit halls are equipped with modern lighting and CAT5 enhanced Ethernet connections, and there is Wi-Fi throughout the entire facility. And yet, the old brick walls, the huge wooden beams, and the exposed ceilings, representing the best of 19th century craftsmanship, are intact, creating an ambience rare in modern convention facilities.

The Center averages over 500 events a year with an occupancy rate close to 70 percent. It has 28 full- and part-time employees, and the Center’s exclusive, in-house catering company has another ten full-time employees, plus on-call wait staff, as needed. “We market to regional conferences and associations, regional education and professional groups, as well as regional corporate businesses” says Bevans. “We also do quite a bit of local, social business; we do a strong catering business. We do graduations, as well, from some of the local colleges.”

While the Center’s business is strong – Bevans says that it will gross over $3 million, this year – a lot of competition has sprung up in Columbus over the past decade. “That’s been one of our challenges,” he admits. “A conference center has opened up at the university and we compete for some meeting business with them. We also have a private event center that opened up about ten years ago, as well, that we compete against for social business, such as weddings.” (The Center hosts over 50 weddings a year.) “There’s also a great museum; we’re close to Fort Benning and a private foundation opened up The National Infantry Museum and they do events, as well. So, there’s been a lot of competition, of late.”

Bevans believes that while the uniqueness of the Center’s architecture is still a big draw, a major drawback when it comes to booking business is a lack of nearby hotel rooms. “That’s our biggest weakness, right now,” he laments. “Most markets either have hotels attached to the building or across the street and we just have one hotel across the street with 177 rooms. The one thing we do need in our immediate area is more full-service hotel space.” Bevans says the land is available and that the city’s economic development authority is working with the Columbus Georgia Chamber of Commerce to attract a developer to locate another full-service hotel adjacent to, or close by, the Center.

Meanwhile, keeping the old Iron Works building in top condition is one of Bevans’ most immediate concerns. “We have some more capital needs that we have to take care of,” he says. “That’s our main focus, right now. Since the structure is so old, we have to do some maintenance. It’s about $2 million for stabilizing some of the wooden beams in the exhibit halls, and we’re also re-doing the roof, which is quite old.”

In the 19th and early 20th centuries, the old Columbus Iron Works was essential to the economic life of the city. Today, in the 21st, the Columbus Georgia Convention & Trade Center is seeking to play its role as yet another important economic driver of business and commerce in the City of Columbus’ revitalized downtown.

Check out this handpicked feature on the Great Columbus Convention Center in Ohio.

WHAT: The City of Columbus’ main, municipal event center 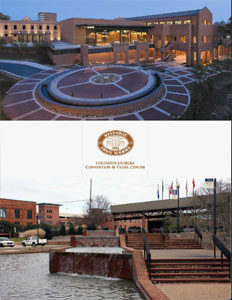