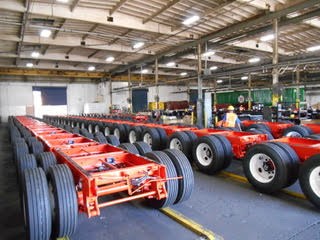 Containerization is a system of intermodal freight transport that uses shipping containers with standardized dimensions, that can be loaded and unloaded, stacked, transported efficiently over long distances, and transferred from one mode of transport to another – container ships, rail flatcars, and trailer trucks. The first modern shipping container was invented and patented in 1956 by an American named Malcolm McLean. McLean was not an ocean shipper, but a trucker who saw the need to streamline the transfer of cargo between the various modes of transport, without having to constantly unpack and repack it.

Because containerization managed to greatly reduce the expense and speed of international trade, it drastically changed the way the shipping industry had operated for centuries, and ultimately led to the globalization of the world economy. Today, approximately 90 percent of all non-bulk cargo, worldwide, is moved by containers stacked on transport ships, with roughly a quarter of all container transshipments coming from China. In America, nearly 25 million containers are moved every year by some form of intermodal transport.

CIMC, the China International Marine Corporation, is the world’s largest manufacturer of container boxes and the trailer chassis that the boxes sit on when they get driven to their final destinations and then back again to the shipyards from whence they came. In 2008, CIMC bought 60 percent of a Texas-based chassis-making company called Direct Chassis; in 2011, CIMC acquired 100 percent of Direct Chassis and the company became part of CIMC USA, was renamed CIMC Intermodal Equipment, and moved from Texas to South Gate, California where, today, it receives steel chassis components produced by CIMC in China. Those steel sub-assemblies are then combined with domestically sourced trailer components – wheels, tires, axles, suspensions, and electrical systems – to produce trailers and chassis engineered specifically for the North American market. In addition to its west coast facility, CIMC Intermodal Equipment opened another chassis assembly plant in 2015, in Emporia, Virginia.

“The chassis market, historically, has not been very sexy,” says Frank Sonzala, named company CEO/ President in 2016. “It’s been the cheapest, lowest-grade product in the transportation industry.” The reason, according to Sonzala, is that, heretofore, chassis fleets were considered a stepchild of the steamship companies; they titularly owned them, but they passed the responsibility for their performance onto the trucking companies that pulled them. Thus, they weren’t always built with safety or longevity in mind. “CIMC decided to change that way of operating and to make the standard product very similar to what is the standard product in the trucking industry for a trailer,” Sonzala says; “a chassis that was more of a modern premium than a very inexpensive product.”

For example, CIMC changed their chassis’ tires from bias to radial, and improved their lighting and braking systems. “And now, the premium product is a whole lot safer on the highways and maintenance is minimal because you take the tires out of the equation, and you take lights out of the equation, and you put better brakes on it, and those are the three major maintenance items in the trucking industry,” says Sonzala.

“So, being an innovator in that manner, one would think that we wouldn’t be gaining market share, because we were selling what was seen as a less expensive product for a higher price,” Sonzala proffers. “But, the industry, especially the railroads, went with us first; and then the trucking companies started to go with it, because they recognized it was like a trailer; and then the marine chassis were the last to go with it, but now they are one of the biggest users.”

“And the idea of the chassis pool has shifted from steamship companies owning chassis to pools owning chassis,” Sonzala continues. “And now, the drivers come in and they get to pick from the pool the chassis they want to put the container box on. If there are ten chassis there, the one that has the best paint job, the best brakes, the best lights, the best tires is the one the driver wants to take, because he’s responsible for highway safety and everything working right as he’s hauling.”

In order to exponentially upgrade the level of quality of the chassis’ steel components, CIMC built a new, digitalized, total emission-free factory in China called the Light Tower. “It has 46 welding machines for perfect welds,” Sonzala exclaims. “It has eight laser cutting machines to cut all the parts perfectly and to spec. And we installed the KTL coating system, where 13 vats prepare the metal to absorb the electrostatically sprayed coating to 1.6 mills in thickness, which reduces the weight of the chassis by 80 pounds of what would have been excess paint, and offers a seven-year warranty because the coating is actually embedded in the steel. It gives you what we call the ‘BMW car auto-finish’ to our chassis, with very good scrape and scratch and rust resistance. There’s very high-end technology going into chassis manufacturing today. And, to my knowledge, we are the only ones to have invested the millions of dollars into the KTL coating system for chassis.”

CIMC also made certain other technological advancements available to its customers that can help them in their operations. “We are able to weigh chassis; we can weigh a box on a chassis with an onboard scale,” Sonzala explains. “We can trace tires as they go down the road and monitor them, and send any kind of report by GPS and cell phone lines to a computer that a dispatcher can monitor. We can monitor tire inflation, ABS operation, and container box doors can be monitored for being open or closed.”

The improvements in chassis construction and design, added to the upgrades in chassis components and the advanced monitoring devices, have clearly paid off well for CIMC Intermodal Equipment. In 2012, the company sold over 6,000 chassis; last year it sold 27,000+. “So, the growth there was very strong from 2012 to 2017,” Sonzala says. “Our forecast for this year is to top 33,000 total chassis, and someday we will get to 60,000. We’ve got 77-78 percent of all the chassis business in North America. There’s a reason for that and it’s not price; we’re not making a whole lot of money at the price we’re selling for, but our customers can’t get the quality and the quantity anywhere else. We’re very good at what we do.”

Sonzala believes that, within five or ten years, CIMC Intermodal Equipment will likely build its own factory in the U.S. to manufacture chassis for its North American product line and even begin shipping chassis to China to help its growing economy meet the demand. “So, we’re currently looking into that option,” says Sonzala. “It’s not on the horizon very soon; it takes a lot of time to make a decision that big, and to find the right place. We’d like to have a deep water port, for sure, because I can see us sending these chassis all over the world, not just back to China.”

Meanwhile, CIMC Intermodal Equipment and its sister SCVC company in China continue to maintain their symbiotic relationship. “We put together a task force between our Chinese counterpart and our American factory that we call ‘The Space Station.’” Sonzala relates. “Three ‘astronauts’ come in for three months at a time from the Shenzhen headquarters –  engineers, quality people, customer service people. We teach them about the chassis business in North America and we have our people learning from them. At the end of three months, they go back to China to do a better job, then another group comes over and we start the process over again. This brings new designs for chassis; new ways for producing them and making them more maintenance-free; new ways of making them multiple lengths. We want chassis to last fifteen to twenty years and never have to get another paint job; and at some point in time to have disc brakes, like our cars do, instead of drum brakes. There are so many things that we are doing, looking to the future and remembering that, in the past, intermodalism started with a guy, Malcom McClean, having a dream of putting a box on a ship and moving it somewhere.”

WHO: CIMC Intermodal Equipment
WHAT: A manufacturer and dealer of container box chassis
WHERE: South Gate, California
WEBSITE: www.cimcintermodalequipment.com

PPG Industries – PPG Industries, Inc. is an American Fortune 500 company and global supplier of paints, coatings, specialty materials, fiberglass, and optical products. Founded in 1883, as Pittsburgh Plate Glass by Captain John B. Ford and John Pitcairn, today, PPG has global headquarters in Pittsburgh, and operates in nearly 70 countries around the globe. By revenue it is the largest coatings company in the world. PPG serves customers in construction, consumer products, industrial, and transportation markets, and aftermarkets. – www.ppg.com

SAF Holland – SAF Holland is a leading global commercial vehicle supplier and the largest independent listed manufacturer of chassis-related systems and components for trailers and semi-trailers, trucks and buses. – www.safholland.com 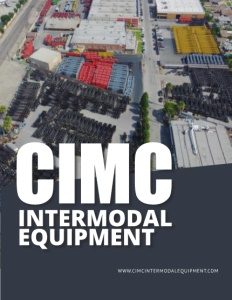