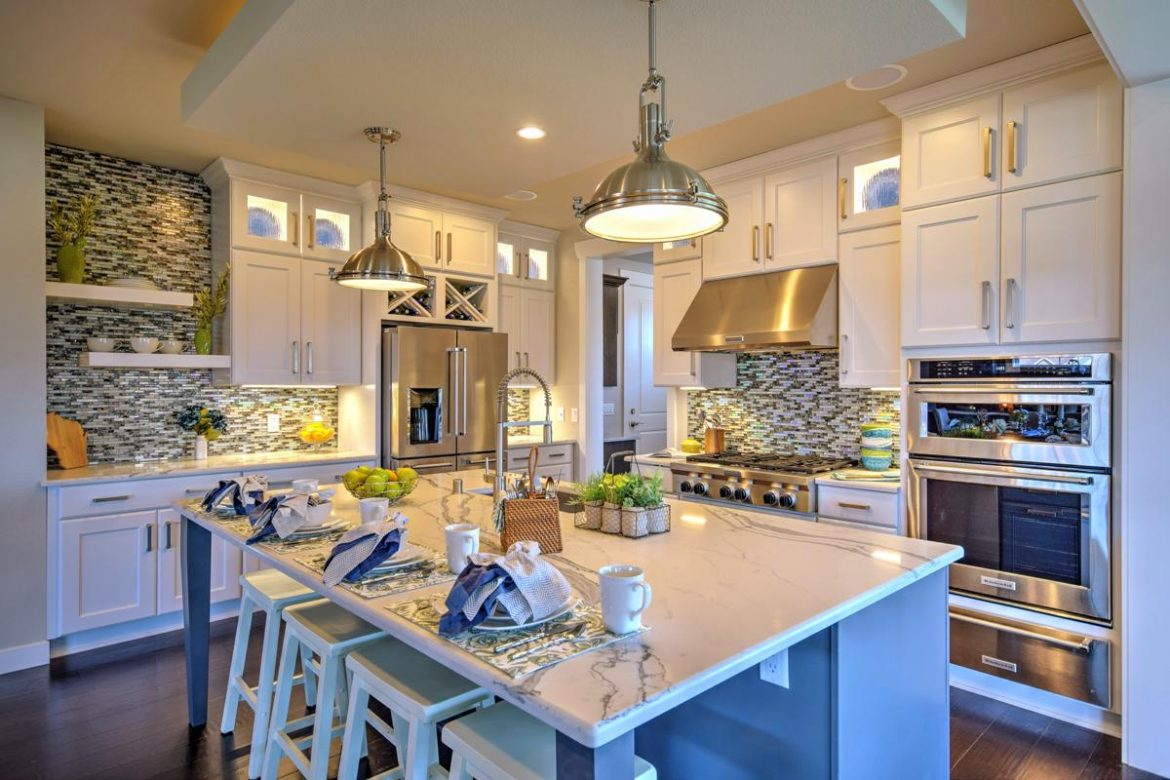 There’s an old saying: “Adversity breeds creativity.” That maxim may well be applied to the story of Tim O’Brien and his Wisconsin-based company, Tim O’Brien Homes, an organization he began in mid-2007 with his two business partners, Matt and Mark Neumann, just as the national housing market began its downward slide. “I had no idea of starting a company at that time,” O’Brien avers. “I was let go from my previous position as the market started to crash. The regional builder that I worked with had decided that they were going to centralize their leadership and I wasn’t part of the plan.”

Facing the adversity of being out of a job in a declining industry, O’Brien decided to get creative. “I had an opportunity to sit down with Matt Neumann, a developer friend of mine, and we decided it might be a great time to start a homebuilding company,” he recounts. “Even though the market was sliding into a recession, there were going to be opportunities for us to build a great team, take advantage of some discounted home sites, and be a fresh face in a market that is imploding around us. And it’s worked out pretty well.”

Of course, there’s another saying: “The first days are the hardest days.” “Initially, just before things started blowing up around us, we made some business proposals to a few banks for lines of credit they were going to make available to us,” O’Brien continues. “That’s about the time when WaMu (Washington Mutual) went under and the banks said, ‘We decided we no longer want to invest in real estate,’ pulling all their offers off the table.” Providentially for the nascent business, one of O’Brien’s partners had a good relationship with a small, local bank. “Mark reached out to them, and they decided that they were willing to give us a line of credit and help us get going. If we did not have that connection, we most likely would have stalled at that point.”

There is yet another saying: “A journey of a thousand miles must begin with a single step.” Tim O’Brien Homes’ first step was small, indeed. “In 2007, we closed one home and sold two,” he remembers. But then the journey began to speed up. “In the following year, we sold about 28 homes. Around 2009 and 2010, we were able to go back to some of the banks we had originally talked to and secure additional lines of credit, allowing us continue to grow the business. We sold about 49 in 2009; about 59 in 2010; and we just kept climbing from there. Now, we’re doing about 225 homes a year.” Originally based in the greater Milwaukee area, the company expanded into Madison, the state capital, in 2012. Today, between the two markets, it has 58 full-time employees.

The fact that Tim O’Brien Homes has succeeded as well as it has is even more remarkable considering the fact that O’Brien isn’t your ordinary homebuilder. “We decided when we started the organization that we’d be a green and energy-efficient builder because we believed it was the future of the industry,” he states. “And we wanted to make it not the exception, not a niche market, but make it the norm; make it the new way of building homes. We wanted to make it affordable and value-based, so the greater market could find benefit in the total cost of home ownership – the initial cost to build or buy a home, plus the cost to heat and cool, as well as maintain the home. Pay a little bit more to have a lower and more predictable utility cost, plus greener features and benefits in the home.  All of which lead to better indoor air quality and a greater level of comfort and control.”

“The other thing we said we were going to do was to have every home that was built to have a third-party green certification and a third-party energy certification to verify that we have met the criteria from independent organizations,” O’Brien adds. “We follow the ‘Green Built Homes’ program, administered by the Wisconsin Environmental Initiative, and we also follow the ‘Focus on Energy’ program, which is a non-profit organization working in coordination with utility companies around the state to create awareness of energy efficiency. They have a specific program and we pay them to come in and certify us.”

O’Brien is a civil engineer by training, and calls himself “a science and data guy.” As such, he got heavily involved in the energy efficiency side of the building process, searching for the right materials and resources to provide the greatest impact and the greatest level of return for his clients. “We did a lot of R&D to find the best combination of materials,” he says. “We look at the house as a system, rather than as pieces and parts, and focus on air tightness and air quality.” Another focus was adding energy efficient materials that would be able to pay for themselves within the first five years of ownership because of lower utility costs.

Surprisingly, or perhaps not, O’Brien began to notice that other area builders were beginning to jump on the bandwagon. “Initially, people didn’t think we would make it through 2007 and 2008,” he relates. “And then 2009 rolled around and people starting scratching their heads, wondering how we were able to still be in the game. What we found was that other builders in the marketplace started copying some of our specifications; some of the things that we did on the energy efficiency side. It was amazing. I’d be out in the field, driving around and: ‘Holy Cow! They just switched their insulation package or their wall sheathing to what we’re doing.’”

O’Brien reports that the company’s primary buying demographic are previous home owners who are  building a new home for the first time. “About 40 percent of what we build is on speculation; 60 percent is semi-custom,” he explains. “So, the clients are coming to us and building from our portfolio of plans and personalizing them with certain pre-set options, such as structural options and alternative room layouts. We’ll customize a little bit, but we’re not a ‘custom’ homebuilder. We have a portfolio of home sites throughout the marketplace and about 95 percent of what we sell is built on home sites we control – not owned, but optioned.”

Recently, Tim O’Brien Homes opened a brand new community, which O’Brien says is going to be the first net-zero energy community in the state, and one of the few in the Midwest. “It will be neutral on electrical consumption and production,” he declares. “These homes will  produce as much electrical energy with solar panels as compared to what the home consumes on an annualized basis. We have 34 lots in this neighborhood and every home is going to be built with net-zero features that have to meet the EPA’s Net-Zero Energy requirement.”

In the future, O’Brien would like to expand that vision by building a community that is completely off the grid. “Part of our three-year plan is to build an energy-independent community, where energy consumed is all produced onsite, whether that’s community geo-thermal wells or community solar systems. It will require the utility board of a municipality to be in support of the concept; we can’t just go in and create our own mini-power plant without the utilities’ and municipalities’ approval. But it does happen in other parts of the country and North America; it happens in Canada quite frequently and Colorado and Texas have a couple of electrically-independent communities.”

O’Brien prefers to assign his company’s success less to his creativity and pluck, and more to the company culture that pervades the ten-year old firm. “We spent a tremendous amount of time developing our core values when we were growing our organization and we knew we had to hire a number of new people quickly. We use those values for hiring, for termination, for performance reviews, and we celebrate those core values on a monthly basis. We have a program called ‘You ShamROCK.’ Any employee can nominate another employee for exemplifying any one of our seven core values. Every month, we have a monthly winner and at the end of the year, we have an annual You ShamROCK of the Year award. Our culture has driven the performance of our organization – not only with our employees, but with our trade partners, with the community and neighborhoods in which we operate, even our bank partners. That’s been the big part of our success.”

Combining two of those seven core values – Embracing Social Responsibility and Nurturing a Learning Organization – Tim O’Brien Homes began a partnership with the Oconomowoc High School Building Trades program, about six years ago. “About fifteen kids are out on the job site, building a home, side by side with us and our trade partners, Monday through Friday, during the fall season, 7:30 to 10:30,” O’Brien says. “We set up a spec home the week before they start school. The kids are invited to do a ground breaking and they’re involved every step of the way. We’re not having them build the home by themselves, but they’re participating in the building process. Our trade partners wrap up the work on the home when the kids leave each day, so the kids come back without missing a step. We want our trades to be teachers, and it took us two years to get the right combination of trades who were willing to engage with the kids, but the success stories have been incredible – some of these kids have been hired by our trade partners; they’ve gone on to school to be construction managers; some of them are in an apprenticeship program. We’re trying to get more schools involved.  Next year, we’re conducting a similar program with another school district, and then hopefully a third school district. It’s been a wonderful program, since our industry is suffering from a severe labor shortage from people that left the industry, and people that never continued to grow within the industry during this last recession.”

In the end, O’Brien believes that building homes is really just a way to achieve the company’s core purpose, which he says is “Positively Impacting People’s Lives.” And that reminds us of yet another saying: “Do today what others won’t do so that tomorrow you can do what others cannot.” ‘Nuff said.

WHO: Tim O’Brien Homes
WHAT: A builder of energy-efficient homes
WHERE: Milwaukee and Madison, Wisconsin
WEBSITE: www.timobrienhomes.com 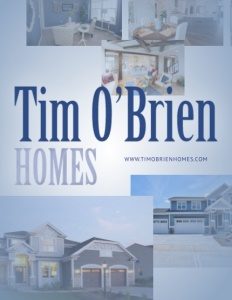