Pride of the Region

When people think of Alberta’s economy, it’s often in terms of oil-sopped boom and bust.

But though the province’s strong connection to the energy sector can certainly be indicative of greater Canadian fiscal well-being or turmoil, some of its less-drilled areas go about carving out niches where predictability and stability are of far higher importance than oil and gas.

The county’s economic development officer for two years since he exited a similar post with the nearby town of Fort Macleod, Ebel characterized the new county role as being more about building long-term business relationships than being available for torrid flings.

“Southern Alberta doesn’t really fall into that cycle in the same way,” he said. “What you kind of get is a nice, steady stable increase over time. You don’t maybe see the dramatic growth when things are going really, really well, but at the same time you also don’t see the real falls. It’s a nice, steady, predictable, stable pattern of growth and it seems to be working very well for the region.”

County population – which doesn’t factor in the separately governed city of Lethbridge – has indeed shown little movement since the arrival of the 21st century. Lethbridge County had 9,930 residents at the time of the 2001 federal census, then ticked up slightly to 10,302 in 2006 (a 3.7 percent rise) before a slight drop to 10,061 at the time of the 2011 count (a 1.9 percent decline).

But Ebel said those figures are particularly deceiving as they relate to business growth, because the county draws from the city labor market and renders the populations “interchangeable.”

Additionally, though he concedes new business inquiries received by the county are labeled “sexy,” he’s more likely to measure success from existing companies that decide to put down long-term roots.

In 2014 alone, he said, five resident companies moved into the next phase of expansion plans or added capacity, including the province’s largest cheese factory – which is located within the county and both doubled production volume and boosted its staff by a third.

“We are really pleased at what we’re seeing here,” Ebel said. “Does this splash across the newspapers or anything like that? Not really. But for the people in the know, and that’s my job, it’s a very good indicator that things are going well. From our perspective, it’s more about what our businesses are actually doing, and the main trend that I’m seeing is expansion.”

The reason for the commitment uptick, Ebel said, is as simple as, well… simplicity.

“The short answer is we’re a good place to do business,” he said.

“The county has a very pro-business attitude. When we get an inquiry, we will look at every possible way of making it work. We’re not about the red tape. We’re about working with the business to cut through the red tape and get well-established. Businesses know that if they’re trying to get established here or they want to expand, the county will work with them and support them to make them successful. And they also know that they’re valued.”

Ebel and members of the county’s council get to know the management teams of each local business early in the process, which makes it easier to handle any subsequent issues and iron out any potential kinks toward further expansion. Other infrastructure benefits, he said, include the county’s surplus of reasonably priced available land, a favorable tax rate compared to larger urban jurisdictions and convenient highway, rail and air access to transport supplies and get products to market.

Inbound inquiries make up the majority of development-centric traffic now, Ebel said, though he and his colleagues are on the cusp of employing a more proactive strategy to sell Lethbridge elsewhere.

“The county’s main economic sector is agriculture, no question about that, but we’re kind of looking down the road and asking what does the future hold and what are some high-value, high-tech benefits that can come from agriculture,” he said. “We are very keenly working on developing our bio-industrial sector. We have some companies operating here that are working in that, but we are going to be actively pursuing that. We have more zoned industrial commercial land coming online here, so we have a place to put these companies and we’re planning the proper support for them.

“We don’t want to be looking past or taking for granted what we already have while we’re casting around for new business. In that way, it’s like a marriage, there’s a lot of hard work that goes into it.”

When it comes to the neighbors, the environment is more collaborative than combative, too.

Ebel said dealings with other business-seeking entities in Southern Alberta – defined as everything between Calgary and the U.S. border – typically lean closer to “us against them” rather than “me versus you.” And in the cases where a business does choose to locate somewhere other than Lethbridge County, his focus pivots to pursuit of other entities that can act as a complement.

“We’re not so much focused on our immediate

neighbors or other jurisdictions in the province, we’re just looking to do the best we can,” he said. “You can’t win them all. It doesn’t mean that we don’t compete, but it’s a very low-key, above-board competition. It’s not one where there are long-standing grudges. In that case, everyone is more like, ‘Well, at least it came close to home.’”

As for the future, Ebel said he expects to be in a “ramping-up” mode between now and 2020, meaning an uptick on the population graph that falls somewhere between the modest gains the county has seen since the 2001 census and the “explosive” growth that the city of Lethbridge has experienced.

He’s particularly optimistic about the attractiveness of county industrial parks that have been situated near road and rail tie-ins, and about a dedication to sustainable development that will pay off when companies make long-term commitments to the county, rather than arriving and exiting in five years.

“It’s not so much an emphasis on luring them here,” he said. “We want to have businesses here 10, 20 and 30 years from now that are successful, prosperous and growing. We’re trying to position what we offer for that. Not for the quick hit, but for the ones that are going to be here, going to put down roots as a company and going to stay here. I’d be very disappointed if I didn’t see significant growth, because I think we’re laying a good foundation and a good framework for it.”

WHAT: County of 10,061 residents (at the time of the 2011 federal census) that was created in 1964 from the official amalgamation of the Municipal District of Lethbridge No. 25 and the Lethbridge School Division No. 7; formal name was changed from County of Lethbridge to Lethbridge County in 2013

WHERE: Southern Alberta, about 240 kilometers south of Calgary and 115 kilometers north of the U.S. border with Montana 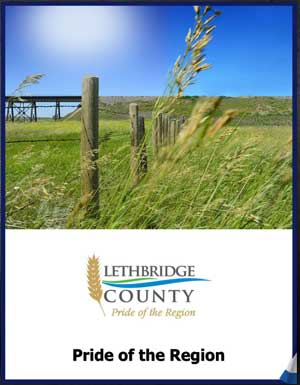