If you imagine a Mongolian grill restaurant, you might not instantly imagine it in Missoula, Mont.

In fact, for practical purposes, her role as VP of franchise development for the burgeoning HuHot Mongolian Grills chain is to see that the brand expands far and wide from its “Big Sky” roots.

Though it now boasts 54 locations across 16 states, the idea took hold in Montana’s second-most populous city in 1999, shortly after O’Shea’s parents – Dan and Linda Vap – returned from a trip to nearby Portland, Ore.
“They were in Portland and saw a commercial,” O’Shea said. “They’d been in the pizza business and needed a new concept. They saw the commercial and went and dined in the restaurant, and they thought it was interesting and a neat idea, and it made them want to take it to a bigger level.”

As luck would have it, her brother, Andrew Vap, was living in the Washington, D.C. area at the time and looking for an opportunity to move back out west. The parents went all-in and opened the first restaurant in Missoula, then allowed Andrew to take the lead in transforming the business to a franchised operation. The first franchised location was opened nearly 1,200 miles away – in Omaha, Neb. – three years later, and Andrew now serves as the overall operation’s chief executive. 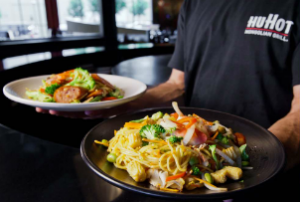 Fifteen years after the initial meal was prepared, self-assurance remains a primary ingredient, too.

The HuHot website describes the chain as “a bold, exciting oasis in a desert of boring restaurant concepts. Our branding efforts mirror Genghis Khan’s attitude toward the world… ripe for conquest. Like Genghis Khan viewed rival nations, we also look at our competition with confident disdain. These themes are carried throughout all our marketing and are included in our in-store materials. Adults and kids alike find themselves caught up in the excitement with each visit.”

The restaurant name, incidentally, comes from the word “Hohhot,” which is the capital city of Inner Mongolia. The original name in Missoula was “Mongo’s,” but it was changed when the business began franchising because the leadership sought something it believed with resonate better nationally.

All but eight of the 54 restaurant locations are now franchises, and O’Shea said the corporate apparatus maintains an ownership stake in the other eight to both provide a laboratory for potential new approaches and concepts and to stay connected with the day-to-day issues faced by owners.

The majority of testing is done in those eight stores, she said, though once a concept is deemed worthwhile it’s rolled out to the entire roster of locations on a uniform basis. Most of the restaurants are part of retail strip plaza set-ups and occupy roughly 5,000 to 6,000 square feet of space, and great care is taken to ensure all the branding elements are in place from one to another.

“No matter which one you walk into, it has all the visuals,” O’Shea said. “From the giant grill to the murals on the walls to the chopsticks in the entry way. Our job is make sure you know it’s a HuHot.”

And what appearance doesn’t do toward that end, she said, products will.

O’Shea said the HuHot leadership team looks less upon the relatively small number of active players in the Mongolian grill space as competition, and more at the plethora of restaurant choices available to consumers across the entire casual dining landscape. Differentiation in that environment, she said, is a combination of unique menu options and more hands-on control for guests.
“People want customization. They wanted control over their meal. They want to create their own meal,” she said. “Those are two of the things, and from there it’s an easy transition to other factors. We serve healthy food. There’s nothing behind the scenes in our restaurants, and with so many more people concerned about allergies and where the food is actually coming from, that’s significant.”

Another positive trend is the growth of adventure-based food programming on television.

“When people watch the TV shows they 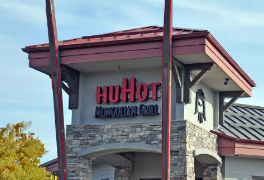 might think they’re more adventurous, whether they really are or not,” O’Shea said. “The way we prepare our meals takes the fear factor out of it.”

Prospective franchisees are required less to have restaurant experience in their past, and more to have simply proven the ability to operate a business and manage employees, regardless of the setting. The rationale, she said, is that good owners will hire good managers, who will then hire good cooks and employees to create the right type of in-house atmosphere.

“Selection is an art form,” O’Shea said. “You think you’re replicating like gangbusters and you go to a place and it doesn’t do sales. The bottom line is that you want to people where people are going to eat, so they don’t have to look for you. Foot traffic and driving traffic are important. You have to be seen. If you’re in a place that’s hard to get to, chances are they won’t find you in there.”

A new marketing approach and a new concept to work side by side with HuHot are on the agenda for 2015, she said, as is the growth of the franchise roster at an annual rate of six to 10 locations.

“We want to keep the mindset that it’s more important to do it well than to do it for the sake of doing it. We won’t just do 20 stores per year if we don’t think it’s the right thing to do. We want to continue along our path and keep everyone happy and keep trying to do it the right way.”

WHO: HuHot Mongolian Grills
WHAT: Mongolian grill-style restaurant that was created in 1999 and began franchising in 2002
WHERE: Corporate headquarters in Missoula, Mont.
WEBSITE: www.HuHot.com 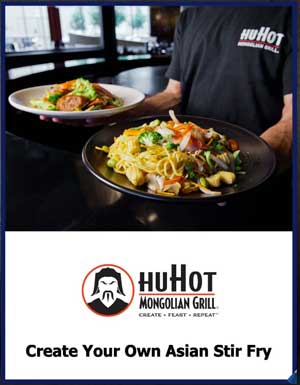