The City of Cambridge – It’s All Right There

Two issues from the past are forming the to-do list for the future for George Elliott.

The commissioner of transportation and public works for the city of Cambridge, Ontario is first challenged by thin-walled cast iron water mains that were used in the 1970s and are now, after 40 years, failing to live up to what was billed as an 80-to-100-year life span at their installation.

Second, the city has a large volume of small-diameter – four inches or smaller – water mains that are performing well materially, but are not providing flow capacity warranted by increases in demand or required by more stringent fire-protection standards and will need replacement.

The city began an improvement initiative in earnest in 2010 and Elliott now forecasts that the 15-year program has become a 10-year program.

“In 10 years, we will be fully caught up and at a point of reaching the sustainable levels,” he said.

A 10-year financial plan was approved by the city council that includes an average 7 percent annual water rate increase to fund the remaining projects. It’s a big pill to swallow, Elliott conceded, by a far smaller one than it would have been had the reactive approach continued. 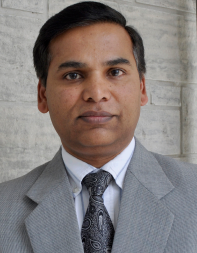 “If we hadn’t been able to identify the backlog and know what we truly had, there’s no way we could have forecast what would be sustainable,” he said. “That’s the magic behind the cloak here. Having that knowledge makes it possible for us to plan, to sell the idea to the ratepayers and the council to get the money we need. And we need a lot of money.”

Toward that end, past provincial legislation is becoming an asset.

Because Ontario law mandates that municipalities must establish improvement plans and must work toward a point of sustainability, those responsible for making the repairs can go to the city government and not have to plead their case for getting the work done.

“We can go to council and say this is not really an option,” Elliott said. “This is basically saying you have to do it, and we’re putting together the best plan to lessen the burden, lessen the hurt as much as we can, but still keeping on target for doing the work. If we don’t have that provincial legislation behind us to hammer that message home, we probably don’t succeed.”

That’s the precise battle that those seeking monies for improvements on things to which the provincial mandate doesn’t apply – roads, street lights, sidewalks, bridges and retaining walls among them – have to fight, against citizens and politicians who are sometimes looking to fund more eye-catching projects that aren’t based on need.

“It’s not that I don’t want to see arenas and pools or what not,” Elliott said. “It’s that battle of need vs. want that the public and the politicians will often go for the so-called sexy projects. Nobody wants to say ‘Hey, we fixed the sanitary sewer.’ It’s all great stuff, but when it’s done at a harm to funding some of the basic infrastructure that a city needs, it really puts us in a bind.

“I need to have lunch, but I want to go and rent a Jet Ski and go down the river. So what do you do? You go down and Jet Ski and you go hungry for a while.”

When it comes to infrastructure issues – and counseling other municipality leaders on how to be efficient in the face of myriad complex challenges –Elliott gets positively profound.

“There is hope,” he said. “Cities have extremely long lives.

“They’re going to be here for hundreds of years. There is hope that you can establish a city system of infrastructure that is sustainable and can be in place for the long term.”

He’s got a wall full of civil engineering street cred from Lakehead University in Thunder Bay and held senior municipal positions in North Bay and Kirkland Lake before arriving in Cambridge in 2010. He was elevated to his current role a year later and has since been part of an ongoing shift in the planning paradigm that’s positioned the city to get ahead of issues it had trailed for years. 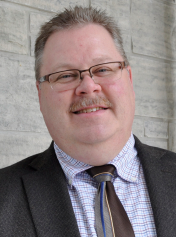 problem, and we’ve been able to get it turned around in a forecasted 20 years,” he said. “It may take 20 to 25 years to turn your city around, but there is the hope you can do it. It can be done.”

Elliott and the city’s director of engineering, Yogesh Shah, are the incumbent driving forces these days of a proactive approach toward water and sewer infrastructure maintenance and improvement that was initially considered a decade ago. The process started, Elliott said, with a group of asset managers simply sitting down and approaching the concerns with an eye toward the future, rather than simply reacting to day-to-day catastrophes as they occurred.

Shah and his team looked at Cambridge’s 400 kilometers of far-flung water mains and sanitary sewer systems in 2005 and by 2009 had worked up a painstaking inventory, giving each item a condition rating and assessing a priority to each that determined which needed immediate attention and which ones could wait.

It was a drastic departure from status quo back then, Elliott said, and one he kiddingly suggested Shah and his colleagues aren’t aggressive enough about claiming credit for.

“Through Yogesh’s abilities and his team that they have in the asset management department, they do some real award-winning stuff,” he said.

“They’re doing the leading edge of what asset-management philosophies are all about, and they need a lot more kudos than he’s willing to volunteer for. It gave us the power through knowledge to know where to spend our money to get the best bang for the buck. In the past, something breaks. It breaks two or three times, then it becomes ‘OK, let’s go fix it now.’

“It was all reactive. This allows us to take a proactive approach.”

When the inventory and assessments were done, the city was able to create a pecking order of the work that needed to be done that was already past due – but for whatever reason had not been done. Elliott said $70 million worth of projects fell under that umbrella in Cambridge, and initial estimates were that it would take from 15 to 18 years to get back a break-even point.

“That’s how big of a monster we have in the background,” he said. “This innovation gives us a chance to succeed and a chance to get ahead of that wave.”

AT A GLANCE
WHO: City of Cambridge
WHAT: 38th-largest municipality in Canada – 126,748 residents – according to 2011 census
WHERE: Southwest Ontario, 100 kilometers southwest of Toronto
WEBSITE: www.Cambridge.ca 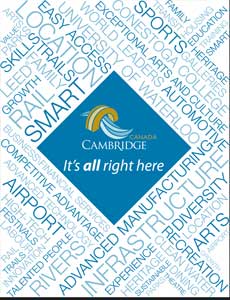 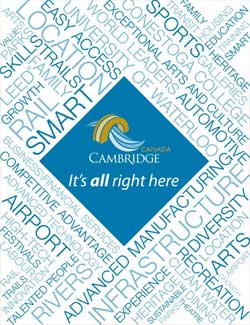