Carson City Airport (CCA) in western Nevada is located three miles northeast of downtown Carson City, the state capital, 30 miles from downtown Reno, 13 miles from Virginia City, and 20 minutes from Lake Tahoe. CCA is currently the 5th overall busiest airport and the 3rd busiest general aviation airport in the state, playing a critical role in the economic vitality of Carson City by creating jobs and income for its residents through airport operations, airport-related industries, and general aviation opportunities. According to a recent study by the University Center for Economic Development in the School of Business at the University of Nevada, Reno, the Airport has a $65 million annual economic impact on the region and supports 490 jobs.

“The Carson City Airport was founded in 1928, so we just celebrated our 91st birthday,” says Airport Manager Kenneth Moen, who was hired in 2018 to run the Airport, after a long career in air traffic control and airport communications and operations. “The airport was established on 76 acres of land provided to Carson City by three prominent local families and has grown to over 531 acres with the thriving Carson City Industrial Airpark, the vibrant manufacturing and industrial hub located north of the Airport. As a general aviation/reliever airport for the Reno-Tahoe International Airport, and the primary airport for the state capital, we exist to ensure not only access to state government, but also access to the national airspace system.”

According to Moen, the CCA is self-sufficient, with all its income – a combination of tax revenues from aircraft on the field and property taxes on the airfield’s privately-owned hangars – contributing to Airport operations. “The Airport Authority doesn’t own any of the hangars or hangar property,” he explains. “We own the ground underneath, so the individual hangars are either owned by associations or individuals. Those individuals and associations pay a property tax fee that’s remitted back to the Airport.”

Currently, there are over 300 home-based aircraft at the CCA, including single- and double-engine airplanes, multi-engine airplanes, jets, helicopters, gliders, and ultralights. There are over 220 hangars and, based on the number of phone calls Moen gets about hangar space, he reasons that the demand exceeds the supply. “Being that we don’t operate the hangars, I can’t tell you what the vacancy rate is; we refer them back to the individual owners,” he remarks. “But I know that there have been some sales transactions since I’ve been here. We also have six new hangars just completed last month; they’re about 3,000 square feet each – box style hangars.”

Moen considers the CCA an extremely business-friendly facility and promotes it far and wide as such – especially to potential corporate migrants from the Golden State, next door. “Nevada is a state with lower taxes and less regulation than our neighbor to the west,” he avers. “And it’s been on a tremendous upswing since Tesla built the Giga-factory in the Tahoe Reno Industrial Center, TRIC, as it’s called, which is about ten miles from Carson City and the largest industrial park in the world – over 80,000 acres. Nevada has seen a migration of companies to this area to grow their businesses and to be able to do business in California and the Pacific, without being under the burden of the taxes and regulations that they’re experiencing.” Blockchains, LLC purchased 68,000 acres in the last year to create a block-chain-based smart city at Innovation Park at TRIC.

Already, within the CCA, there are many unique aviation companies, and dotting its nearby surroundings are many other businesses allied to the aviation sector. The Airport’s fixed base operator is Mountain West Aviation. It provides line services (both above and below wing). It also has helicopter Part 135 operations that include aerial tours and additional flight support services to the Department of Forestry, Bureau of Land management, Department of Transportation, EPA, (both state and federal), NV Energy and various other construction/mining operators. El Aero Services provides Part 135 charters and maintenance; Great Basin Aviation is a locally-based, Part 61 Flight School; and Carson Aviation Services, WB Aviation, Shadetree Aviation, and Weaver Aircraft provide aircraft maintenance and repair services.  Sterling Air is an aircraft broker and provides transient and locally-based aircraft parking and hangars. Sport Aviation Center provides ground and flight training for light‐sport and weight‐shift, trike aircraft.

“We’ve got some great companies that do amazing things,” Moen states. “We have a company called Cactus Airforce – they do war bird restoration and operate a living museum, where people can visit and watch restoration activities in progress, as well as view a variety of restored military aircraft and vehicles. We also have a couple of ‘through-the-fence’ operators. There’s a company called Click Bond and another one called Mustang Squeeze Tools. They both have hangar access for their aircraft that’s incidental to their primary business. It just so happens that Click Bond does do industrial aviation and marine-related fasteners, so they’re an aviation-related business. Mustang Squeeze Tools has a unique aircraft in their hangar – a beautiful B-25 that’s been totally renovated. It’s got the name of ‘Tootsie’ on it and it’s just a gorgeous airplane. It’s been used in air shows and displayed around the country.” The Nevada Department of Transportation also bases two aircraft at the state capital’s Airport. 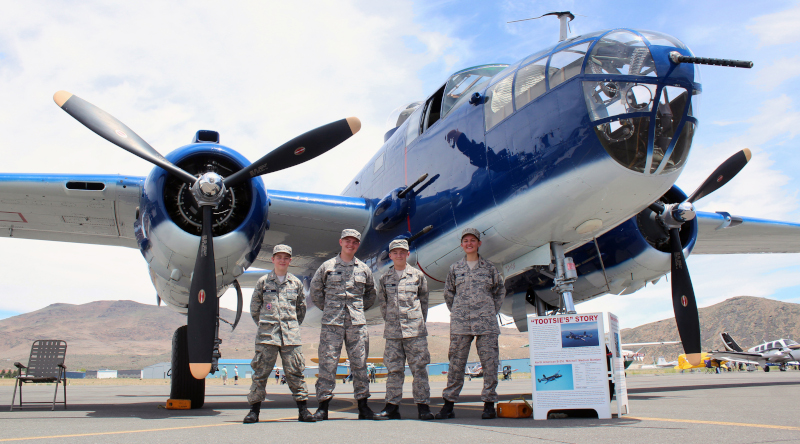 Reno Civil Air Patrol Color Guard and the B25 Tootsie

Moen reports that the CCA is finalizing an Airport Master Plan process that’s attempting to forecast the Airport’s development over the next 20 years – and that development includes physical growth: “As part of the plan, we identified, probably, about 75 acres that we’re looking at annexing in the future. And we already have about 50-plus acres of land available for development. So, to bring another 75 on, would satisfy some future development needs.”

Regarding the CCA’s ongoing development, Moen admits that there is one major impediment standing in the way: “We have a couple of GPS non-precision approaches that serve our Airport, but we don’t have a precision instrument approach,” he begins. “A few years ago, the FAA, during a flight check inspection, implemented a night-time restriction on those approaches. So, that’s an issue; we may have 330 days of VFR (Visual Flight Rules) weather a year, but we have night, every day. So, we have just undergone a night-time instrument approach feasibility study.”

“We hired a company called Lean Engineering to study how we can get the night-time instrument approach restriction could be mitigated,” he continues. “And the firm came back to us and said, ‘It’s not a deal killer. We can work around that.’ So, in January, they submitted a final summary of the feasibility study, indicating that, through installation of a Runway Lead-in Light System, and a Medium Intensity Approach Lighting System, we can mitigate the restriction. The way that a lead-in light system works: it starts out about three miles from the Airport, and through a series of sequenced flashing lights, you can only see them from the air; they’ll be baffled so they’re not visible from the ground, but they would provide a path on that visual portion of the non-precision approach to the runway.

“So, we’re currently in the process of working with the Phoenix flight standards district office of the FAA and what they call the All Weather Operations (AWO) division, and there’s been some simulations created that we’re going to present to the FAA in hopes of getting that instrument approach restriction alleviated. We made a presentation at the Nevada Airport Association’s conference in March, and the Airport District Office out of Phoenix was present, as was a gentleman from the AWO office. The presentation was extremely well-received and, being that we are a general aviation reliever airport for the Reno-Tahoe International Airport, and being that we are part of the national airspace system with access to state government, we think that there’s a real high probability that this project may be funded in the future.” Moen also met with the Associate Administrator for Airports, FAA in Boston to lobby for the improvements.

Moen would also like to be able to extend the Airport’s runway another thousand feet. “So, we’ll end up with a 7,000-ft. runway,” he notes. “We’re currently classified as a B-II airport. We have Gulfstream and Global Express and Dassault Falcon aircraft, we have Citations and Challengers – that sort of thing operating in and out of this field, successfully. But an additional thousand feet would give greater range for aircraft. We have the land available in this Airport to allow companies to operate their fleet in covering the west coast, easily, from here, But, right now, a lot of those folks can only carry enough fuel and passengers to get as far east as, maybe, Oklahoma City, and it’s generally a one-stop to the east coast. But once we get those infrastructure improvements, we should be able to access the east coast from Carson City without an intermediate fuel stop. So, whether we get to a Class C or not, that would be our vision – allowing routine operations by larger aircraft. It would probably remain 6,100 for landing, but 7,000 for departure.  And of course, upgrading the approach landing system; we think that’s a real game-changer for the Airport and the community.”

Regarding the Carson City community, while the CCA caters assiduously to its current and future business operations, it is also a concerned local citizen. Every year in June, the Airport hosts an Open House and Fly-in, with this year’s proceeds going to benefit the Eagle Valley Children’s Home. The day begins with a pancake breakfast hosted by the Experimental Aircraft Association chapter benefiting the Young Eagles Program, which engages children with aviation by providing their first free airplane ride.

“This has been an annual event for decades; the real purpose is to bring the community out to the Airport,” says Moen. “A lot of times, the community can feel separate from this type of airport because they don’t have a plane, and they may not feel they have a reason to be there. Frankly, aviation is something a segment of the population doesn’t get to experience, and I think it’s critical to capture the interest of the younger generations starting when they’re kids.”

WHO: The Carson City Airport