Municipality of North Cowichan, British Columbia – Best of all worlds

Best of all worlds

Business View Magazine interviews Al Siebring, Mayor of the Municipality of North Cowichan, British Columbia, for our focus on Infrastructure in Canadian Cities.

Increasingly known as a lively and diverse destination for sports tourism, North Cowichan holds pride of place as the largest municipality in the Cowichan Valley Regional District (CVRD) on beautiful Vancouver Island, British Columbia. Incorporated in 1873, North Cowichan is a scenic “community of communities” that includes Chemainus, Crofton, Maple Bay, and the South End (the area surrounding the City of Duncan, including University Village). North Cowichan’s 30,000 residents enjoy all the pleasures of a relaxed, active lifestyle in a mostly rural setting which also affords many of the amenities of city life. It’s the best of all worlds.

When it comes to work, North Cowichan has business parks suited to heavy industry, small office suites, and everything in between. The Chemainus Industrial Park is largely comprised of light industrial with some heavy industrial operations, and is home to several lumber and remanufacturing businesses. The Cowichan Valley Highway Industrial Park covers over 400 acres of land, zoned mostly for heavy industry. Only partially developed, this area is ideal to accommodate large scale businesses with room to grow. The well-established, Trans-Canada Highway Business Park has neared capacity and is home to many mid-size business and retail operations. In addition, North Cowichan has industrial and commercially zoned land to accommodate a variety of needs. 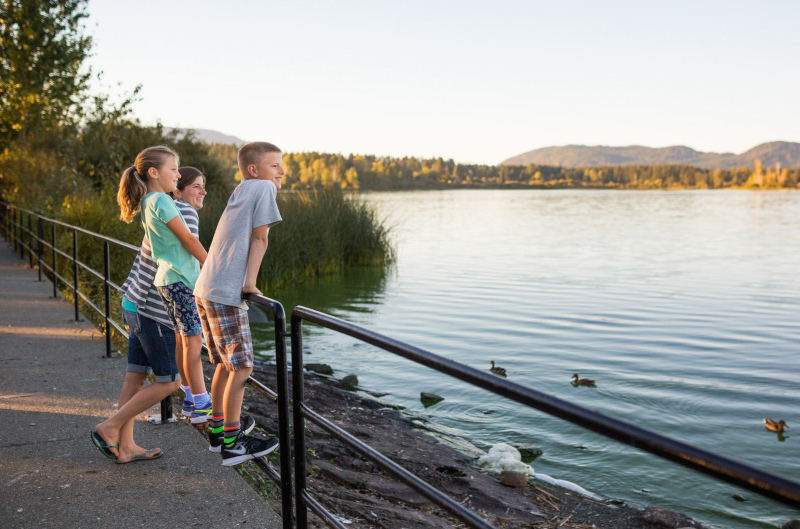 Historically, North Cowichan was a forest-dependent community and that sector is still a major employer, along with the school district which is the largest single employer in the area, and agriculture also plays a significant role. But, today the economic focus is transitioning more towards eco-tourism. Whistler used to be the first stop in the B.C. bike race – an event that brings in cyclers from around the world and a vast number of vendors throughout the coastal regions of BC. Last year, North Cowichan replaced Whistler as the number one stop on the race, partly because of its excellent trails and ease of accessibility.

While every community on Vancouver Island is experiencing housing pressure, North Cowichan is up to the challenge. In the last 14 months, 400 to 500 rentals units have come onstream, or were built and are ready to come in. Council changed the zoning bylaw to allow more basement suites – they were very tightly regulated in the residential zones and now that has opened up, subject to fire code restrictions, etc. There are also several condominiums under construction. And Council has approved 1,400 new doors in a development called Kingsview, which is probably a 30-year buildout. In conjunction, they’ve approved land use for a new shopping center in that area. Another new neighborhood in progress is called Berkey’s Corner – a 6.5-acre commercial parcel with a new 50,000-square-foot grocery-anchored retail development that’s set to open in 2020. And there are several hundred residential units planned for lands right next to that development.

At the southern edge of the municipality, at the northern edge of the city of Duncan, North Cowichan has an ambitious plan for a complex called University Village. Siebring explains, “We have a satellite campus of the Nanaimo-based Vancouver Island University there now. And part of the vision for the new high school, which will be built right next to the university campus, is a trade center for training, so high school students can seamlessly transition to VIU to start vocational training. There is a big demand for that, particularly among the First Nations youth. We’re also very much encouraging mixed-use developments with ground-floor commercial, and second- and third-floor residential. One building already went up and there are tentative plans for a few more in that area. We’re trying to do the same thing in Chemainus. The challenge when you do that is filling the commercial space, more so than the residential.”

Another challenge facing North Cowichan is a lack of accommodations for visitors. Last year, when the municipality hosted the B.C. Summer Games, every Bed & Breakfast was full, people were camping, and the athletes slept on the floor of local high school gyms. Siebring admits, “We made it work but we would love to see a major hotel development here. It could be profitable just because there isn’t enough of that available now.” Tourism Cowichan and Tourism Vancouver Island are great advocates for marketing the region under Destination B.C. And they are all operating with the knowledge that, on the hotel side, North Cowichan is at capacity and needing more. So, increasing available hospitality rooms is a top priority, going forward.

The municipality is also doing its best to address environmental concerns. They have a long-standing sewage treatment system (a lagoon system) right next to the Cowichan River. It works fine; the discharge is well within provincial standards, but the effluent, the liquid that’s left over, is discharged into the river. The discharge has been well-treated and meets all Health Canada standards. But the problem is that, due to climate change, the river flow in the summer is diminishing and the dilution of water to effluent is less than it used to be. “We need to acknowledge that,” says Siebring. “When we re-signed the lease for the lagoons many years ago, which are on First Nations land, we did so with the commitment that we would try to move the outfall out of the river and that’s what we’re working on now. It’s a very expensive project and we’ve been saving for it for years. We hope to get that outfall well out into the ocean away from the mouth of the river to solve those issues.”

In 2013, North Cowichan implemented an award-winning Climate Action & Energy Plan that sets goals for community and corporate GHG emissions reductions. At that time, Council put in place a half percent property tax surcharge and that money goes specifically into the Climate Action & Energy fund to support environmental initiatives which the municipality engages in to reduce corporate emissions. For example, they recently had to replace a Zamboni at one of the hockey rinks and chose a more expensive electric model instead of the conventional propane. That extra cost was taken from the Climate Action & Energy fund because the purchase was another concrete way to reduce emissions.

Speaking to attributes that make North Cowichan a sought-after destination, Ernie Mansueti, North Cowichan’s General Manager of Community Services, shares, “We’re always looking for opportunities to bring in sporting events or community events – any event that does not cost the participant any money to attend. For instance, we lobbied hard to get Hometown Hockey with Ron McLean and Tara Sloan here. That event actually brought in over 10,000 people for the weekend. The mayor mentioned the B.C. Summer Games and the B.C. Bike Race, so when those opportunities present themselves, we’re all in and they’ve been very successful in our area. We’re sandwiched between two fairly big centers – Nanaimo and Victoria – but we’re also accessible to the lower mainland by float plane or ferry. So, if you want to go to the big city, we’re not far away. We now have six mountains that we own and harvest as part of our forestry program, but we’ve also moved into full recreation on those mountains. These trails are becoming world-renowned; the exposure is drawing people here and our citizens are able to access the mountains for hiking, mountain biking, and equestrian use for no charge. Those kinds of amenities and events really bring our community together and make it a place where people want to live.”

Mayor Siebring adds, “Part of the attraction for Rowing Canada was that location piece – close enough to major airports to get in and out, and yet we are rural enough that you’re not paying the ridiculous housing prices that you pay in Victoria or Vancouver or other major centers like Burnaby that also applied for this.”

Ted Swaybe, North Cowichan’s CAO, has the final say: “I’ve been a resident on the island for 30 years, but only two years in North Cowichan and I would say that we’re the untapped area of Vancouver Island. Culturally, we’re more diverse than any other part of the island. We’re connected by land, air, and sea. We’re more affordable and we have the amenities that go along with it, including a proposed new ferry terminal to access Salt Spring Island. North Cowichan is becoming so well-known, now, for sports tourism and recreational use and we’re really positioned well for the upcoming surge to Vancouver Island.”

Where: Vancouver Island, BC

Just 45 minutes from Victoria, you’ll find Cowichan, a stunning coast-to-coast island community that is the pinnacle of the Pacific Northwest, and an unsuspecting treasure begging to be discovered. Discover charm, serenity and adventure through its landscape, bountiful produce and craft drink, and its captivating culture. Cowichan is a unique location for your company to escape to for work and play. Start your planning at www.tourismcowichan.com.