Auburn, Alabama’s unofficial nickname is the “The Loveliest Village on The Plains.” This city of 60,000 on the eastern border of the state, sits on the fall line at the juncture of the Piedmont plateau and the coastal plain. A varied topography lies within its 59 square miles: parts of the city are marked by rolling transitional plains, covered in a mix of hardwood and pine; others by thick forests of oak, gum, and hickory on the high hills and ridges of the southern, outer piedmont; and others, still, by the sandy soils of the inner coastal plain and dense forest of predominantly loblolly pine. Auburn is located near the divide between the Chattahoochee and Tallapoosa River watersheds and is drained by two main creek systems (each of which flow to the Tallapoosa River): the Chewacla/Opintlocco Creek system in the south, and in the north, by the Saugahatchee Creek system. 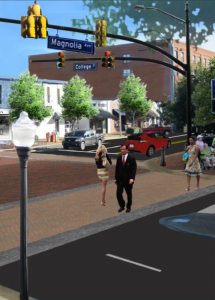 The town is also home to Auburn University. Founded in 1856, it is one of Alabama’s largest colleges with a population of over 25,000 students and 1,400 faculty. The school and the city are inextricably entwined for many reasons, not the least of which is the fact that the university employs roughly one quarter of the city’s total workforce. The two Auburns also share an exuberant enthusiasm for the college’s varsity sports teams, and most especially, for the Auburn Tigers, the school’s famed football squad that won its last national championship in 2010.

Daniel Ballard is Auburn’s Watershed Division Manger, heading a section of the Department of Water Resource Management (WRM). The WRM department is responsible for sewage collection and treatment, water treatment and distribution, and watershed management, which is Ballard’s particular purview. “Our Watershed Division mission is to protect, preserve, and restore our local water resources,” he says. “We do that by meeting those minimum requirements required by the state but we also pride ourselves in going above and beyond the minimum, following our aspirations to achieve that mission and doing what’s necessary.”

Recently, the city of Auburn and Auburn University cooperated on a project that united the spirit of the school’s sports teams with Ballard’s municipal agenda for going above and beyond the minimum in fulfilling his Division’s goals: the re-imagining and reclamation of Toomer’s Corner, one of the city’s most recognizable landmarks. Toomer’s Corner is actually the intersection of College Street and Magnolia Avenue in the heart of downtown Auburn. One corner of the intersection is occupied by Toomer’s Drugs, a city landmark since 1896; another is the anchoring corner of Auburn’s campus. Ballard explains the intersection’s significance in the history of the city:

“After every home game, pretty much the entire population in the city of Auburn – those that live here and the tourists that come for the games – go to that corner after a big win. Originally, there were two live oaks at the corner that had been there for 80 plus years. And we would “roll” those trees after a big game. It was a celebration and done for many years. Well, those trees were poisoned years ago by a deranged fan and when those trees died, it impacted the community. That corner was what we were known for.”

According to Ballard, not only did the trees have to be cut down, their root balls had to be removed along with the polluted soil, meaning that the whole corner had to be demolished. “So when those trees died, both the University and the city saw that as an opportunity to make something better. The university took it upon itself to engage the student body, the city, the community- at-large, and the fan base, nationwide, on ‘What’s the best way to rebuild this corner? Do we want to put it back exactly like it was, or do we want to do something a little bit different?’” While the university rebuilt its corner and planted two live oaks to replace the ones that were lost, Ballard explains that it wasn’t responsible for the intersection, itself, or the three other corners which were controlled by the city.

Meanwhile, the City of Auburn was a participant in the Urban Sustainability Accelerator Program, run out of Portland State University. Ballard explains: “It’s a program to facilitate and accelerate a city’s aspirations for sustainability directly through project implementation. What they do is help you identify projects in your capital improvement projects plan and approach those projects in a more sustainable way. They encourage you to look at projects from the very beginning and see how you can take a more sustainable approach to those projects and still attain your principal objectives.” 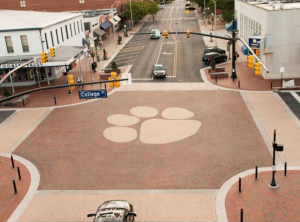 The city identified two principal objectives it wanted to accomplish with the Program’s support: alternative transportation and storm water management – and Toomer’s Corner was a perfect place to accomplish both of them. “So one of the first projects that we took on was the Toomer’s Intersection project,” says Ballard. “We’ve known for awhile that we’ve got an aging infrastructure in our downtown area and we knew that we would be needing to replace that infrastructure, soon. So, we identified not just the replacing of the infrastructure, but revamping the intersection in its entirety to meet some of our sustainable aspirations.”

Ballard explains how the project helped promote alternative transportation: “We’re a thriving college town. We felt that as our urban core grows and changes that we needed to maintain that pedestrian and bicycle-friendly environment. We want people to come downtown. We want people to walk and enjoy downtown. For pedestrian enhancements, the biggest change was a raised intersection as opposed to a traditional intersection, which is sunken and where you have an elevated sidewalk. The intersection, itself, was raised to meet the grade of the sidewalk, so you have a seamless transition from the sidewalk to the crosswalk. It was done, not just to make it more pedestrian-friendly, day-to-day, but when we close that intersection, after big wins, that, in essence, becomes the community, downtown plaza. We close the intersection down and what we’re able to do is create this wonderful event space that no longer has tripping hazards. It’s an open, beautiful intersection. The brick work and the pavers are spectacular. So that was one of the primary pedestrian enhancements. There’s lighting enhancements, too, for evenings. It’s a college town, so it’s alive, pretty much 24/7.”

But, the project also tied in with Ballard’s Watershed Management Division’s mission because it contained a number of green elements. “The brick is not traditional brick pavers. They’re permeable, interlocking concrete pavers that allow for a more natural site hydrology,” he says. “Storm water will infiltrate through the ground and recharge our aquifers, but it also allows for storm water filtration; it filters some of the pollutants in the runoff from our urban environment.” In addition, the city also included a method for determining how well the pavers would work. “We have a fairly robust water quality and monitoring program. We were able to install a pressure transducer in the permeable interlocking concrete paver base and we’re able to evaluate that system to see how well it’s performing,” he adds.

Another benefit, according to Ballard, was the use of “Silva Cells,” the suspended pavement system that the city employed when redeveloping the streetscape. Suspended pavement is a general term for any technology that supports the weight of paving, thereby creating a void space underneath. The Silva Cell is a modular suspended pavement system, composed of frames and decks. Each frame holds about 10 cubic feet of soil and they can be stacked atop one another before being topped with a deck in order to create a maximum containment area for the soil. The Silva Cels are then filled with soil and the system is paved over as it would be normally. In this respect, suspended pavements are essentially soil-delivery systems, allowing lightly compacted, high-quality soils to be made available for tree roots in cities and other heavily-paved environments. In addition to aiding urban tree growth, the soil is also used for on-site, storm water management, maintaining pre-development hydrology, minimizing non-point source pollution and flooding, and recharging watersheds. “We’ve had a number of street tree plantings that we did in coordination with that project,” notes Ballard. “We did those on every tree well; healthier tree growth is what you’re going for.” 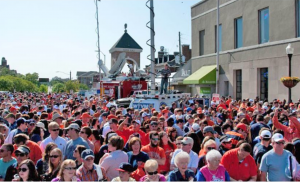 Now that the Toomer’s Corner project is complete, the city is continuing to implement initiatives outlined in its CompPlan 2030, which is its 20-year plan for future growth and development; its Downtown Master Plan, passed by the City Council earlier this year; and its Greenspace and Greenway Master Plan, which is where Ballard’s Watershed Management Division is taking the lead. “Right now, we’ve got a really neat greenway project that we’re working on,” he says. “One of the main streams that flow through our town on the north side is called Saugahatchee Creek. The master plan identifies potential greenway corridors throughout the city. We’re trying to implement one of the principal corridors in that plan which is along Saugahatchee Creek. It’s a fairly large creek – it’s navigable, seasonally, via kayak and canoe. We’re hoping to get people on the water. We value our local water resources, not just for human health and consumption but for its recreational benefits, too.”

Ballard sums up Auburn’s identity in the following way: “We’re a wonderful community,” he says. “We value our quality of life and look at it holistically. We’re a business-friendly community, but we also acknowledge our own responsibility as a steward of the environment.” Whether working to re-imagine its downtown core, or enticing its residents to enjoy the city’s natural places, Auburn’s Watershed Management Division is intent on keeping this town “The Loveliest Village on The Plains.”

WHO: Auburn, Alabama
WHAT: A city of 60,000
WHERE: Located in the eastern portion of the state
WEBSITE: www.auburnalabama.org 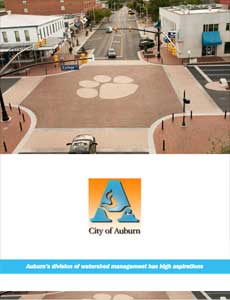