The biggest and the best

They say that everything is bigger and better in Texas. That’s because it’s in the Texas spirit to strive to be the biggest and the best at whatever its hardy citizens choose to do. That statement certainly holds true for the newly transformed Henry B. González Convention Center in San Antonio, named after one of the area’s most beloved politicians who served for almost 40 years in the U.S. House of Representatives.

This past January, the Center opened the doors on a $325 million expansion – the largest capital improvement project in San Antonio’s history. Today the Center has the biggest ballroom in the state, the newest technology of any convention center in the country, and the overall best value for its many customers who come to this city of 1.5 million for their conventions and trade shows.
According to Michael Sawaya, the Center’s Executive Director, the city’s original convention facility dates back to 1968. “The City decided to host the World’s Fair,” he says, “and it was kind of a coming-out party for the community; it opened it up to the world stage. As part of that development, the City built both temporary and permanent facilities. One of the permanent ones was the Convention Center. It included an arena and a theatre for the performing arts.” Over the years, as more and more convention business came to the city-owned facility, it went through several expansions and renovations. “This last expansion was part of repositioning and a re-envisioning of our downtown,” Sawaya adds. “But it also was a way of modernizing and expanding facilities so that we could compete effectively for the next 20-plus years.”

Most of the 1968 structure was demolished. “Today, the only thing that’s left of that original building is the Lila Cockrell Theatre,” Sawaya says. In its place is a brand new, LEED Silver-certified edifice with 514,000 square feet of contiguous exhibit space, 86,500 square feet of column-free multi-purpose space, 70 meeting rooms, and the 54,000-square-foot Stars at Night Ballroom with 1,652 LED lights in its ceiling to give the effect of the stars at night in the Texas sky. On the footprint of the original structure there will be an expansion of the neighboring Hemisfair Park, a remnant of the World’s Fair site, which will provide enhanced opportunities for outdoor events. The expanded Center is set on the River Walk in historic downtown, placing attendees within walking distance to so much of what drives meeting attendance in San Antonio: historic sites including the Alamo, local restaurants, museums, theatres, shops, and thousands of hotel rooms.

Sawaya says that it is the Center’s goal to have the highest economic impact on the community that it possibly can. In order to achieve that objective, it holds very few local events, but rather aims to bring in visitors from around the world. “Most convention centers don’t cover all of their costs,” he explains. “We’re a loss leader. It’s the hotel occupancy tax collections that pay for our debt service and operations. If you do local shows, you’re not collecting hotel occupancy taxes to cover that.” Happily, he reports that the Center operates at one of the highest occupancy rates in the U.S. “We’ve reached our practical maximum several times over the last decade. We operate at about 70 percent year in and year out. My colleagues and competitors just call me and tell me they hate me,” he quips.

The Center’s recent re-opening was the culmination of ten years of planning. “We started studying the market back in 2006,” Sawaya says, “and then did planning and development along the way, identified our resources, and strategically approached it with the idea in mind that we would be open by now. Essentially, our goals were to have prime, contiguous exhibit space that was greater than where we were, previously, and to be in the over-500,000 square foot of exhibit space inventory, because it puts you in a different category when you have over 500,000. It’s kind of a milestone. Other than that, we needed to have meeting space that was located around exhibit halls. When you grow organically, the way this facility had over the years, you tend to get spread out. There wasn’t a particular front door that distributed our patrons throughout the entire facility. So, by starting over and creating a front door, a formal entryway, and creating meeting rooms to surround exhibit halls, we were able to have a facility that now is easy to navigate and is easy to program, as well, for the conferences that we hold.”

“We created one room in particular that we call the Meeting Room of the Future,” Sawaya continues. “Architecturally, the room cantilevers over two lanes of Market Street, here in downtown San Antonio. It’s the only building that does that in the country and it’s the largest cantilever in the country. And that room is one that we decided needed to be, not for today’s meeting planner, but for the next generation. So we had a group of architects who are young and they sat in a room and they came up with concepts that would appeal to a different generation of meeting planner. They came up with different lighting systems, different technology, different types of seating throughout the room, and a different look and feel for a learning environment. So, our intention is to continue to be on the leading edge of those things and have a facility that evolves as the generations of meeting planners evolve.”

In addition to some sophisticated design and construction, the Center’s renovation also relied upon some creative financing. “We didn’t increase any taxes, at all; our tax rate remained the same,” says Sawaya, proudly. “We were able to refinance the outstanding debt that we had, look at future projections on collections, and we were able to finance it. It was a brilliant move. It’s the only time it’s been done in the country. We took existing debt and refinanced that debt, issued new debt, and because the city has a triple-A bond rating, it was backed by the overall collections of the city. So we were able to use our bond rating to get a good rate on the bond and that’s what enabled this project to happen – ahead of schedule and under budget.”

Now that the Henry B. González Convention Center has embarked upon its newest iteration, Sawaya sees it as another way in which the City of San Antonio can attract even more convention business, securing its position as a top destination for conferences and events. “In the past, people chose San Antonio – even going back to the original convention center – because everything works well, here. We have 14,000 hotel rooms in the downtown area and over 9,000 of those are within walking distance of the Convention Center. And they’re connected by the world-famous River Walk.” he says. “But we’ve created something really special – architecturally and from a user perspective. We tried to make this the most user-friendly building in the country. And I think, to a large degree, we’ve accomplished that. So, when people come to San Antonio, not only are they going to come for all those benefits, we want them to come for this facility being something special.”

That’s the Texas spirit – always striving to be bigger and better. And in the case of the Henry B. González Convention Center, San Antonio has certainly succeeded in that quest.

Check out this handpicked feature on Brighton Recovery Center – One person at a time.

WHO: The Henry B. González Convention Center

WHAT: Named for the late US congressman Henry González, the Center hosts more than 300 events each year.

The RK Culinary Group – Founded by Rosemary Kowalski in 1946, Rosemary’s Catering had grown successful enough by 1968 to become the preferred caterer for most top social and business events around town. In 1972, the company was awarded the contract for the food and beverage services at the Henry B. Gonzalez Convention Center and it remains the official caterer today, nearly 45 years later. The team at the Convention Center works from an 18,000 square-foot, on-site kitchen and three satellite kitchens and can serve more than 20,000 guests per event. – www.therkgroup.com 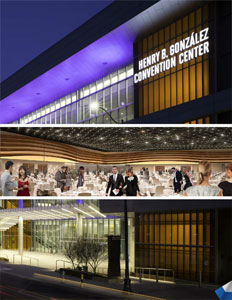