Riverport Railroad, LLC. (RVPR) operates a short line railroad that serves a commercial, industrial and distribution complex at the former Savanna Army Ordinance Depot, now named the Savanna Depot Business & Technology Park. It is located in northwestern Illinois, on the Mississippi River, 40 miles south of Wisconsin and across the river from Bellevue, Iowa, just south of Hanover, Illinois and just north of Savanna, Illinois.

The company was organized to purchase track, rail assets and significant real estate assets located at the Savanna Depot. At present, Riverport Railroad owns 337 acres of land and 72 miles of rail on a railroad right-of-way of 664 acres. RVPR also has the contractual right to buy an additional 974 acres of land. In total Riverport Railroad owns and or controls approximately 2,000 acres.

Amiee Martelle is President and CEO of the Limited Liability Company. When Riverport Railroad purchased the land from the army, she says there was four million dollars of deferred maintenance, “but we didn’t have to overhaul the whole railroad,” she says. “We have rail ranging from 67½ pound to 119 pound rail, so it was just a matter of bringing some of the rail up to heavier gauge, replacing ties that were not replaced and bringing track back into service that had been taken out of service while the Army was operating the rail. In 2005, we obtained a $5.4 million dollar, 25-year loan from the Federal Railroad Administration (FRA) that permitted us to rebuild our interchange yard with the BNSF railroad, and upgrade some of our track. We have also brought additional track back in service.”

The Riverport Railroad has the ability to meet most long and short term railcar storage, transloading, and switching needs, with over 50 plus miles of track that is in operation for storage of up to 2,500 railcars. Martelle says that a lot of its customers come via its relationship with the Class 1, BNSF Railway, and through word-of-mouth from other clients. Interchange is provided with the BNSF at Robinson Spur which drops off cars two days a week with additional days as needed for unit trains.

“We are totally full, right now,” Martelle reports. “We have all 2,500 rail spots full and have a waiting list of over 2,700 rail cars.” But Martelle adds that there’s still a lot of work to do even with the yard operating at full capacity. “We’ve got close to 2,000 acres that we have to maintain and we’ve got over 72 miles of rail and right-of-way that we have to keep clear, clean, and safe. We’re also delivering cars to the two clean and repair facilities that are both tenants of RVPR, and that have a combined total of roughly 50 employees. So, we have some cars coming and going. Even though the railroad operates with only ten employees, it is still able to provide effective service to our tenants and customers.”

The two tenants to which Martelle refers are Rescar and TLC Rail Services. Rescar provides railcar repair, interior coating repair, railcar cleaning, testing and inspection, billing, and NDT (non-destructive testing) services. TLC Rail Services provides railcar-to-truck transloading, on-site mobile cleaning, blasting, and running inspections and repairs. “It was strictly started as a storage yard for rail cars,” Martelle explains, referring to the company’s genesis. “And it gradually evolved. It started with one cleaning and repair facility, and then, in the last year, we’ve added another.”

While there are other railcar storage facilities in the region, Martelle says to her knowledge there are none that can hold as many cars as Riverport Railroad, nor accommodate the different aspects of its customers’ needs. “We can take an entire unit train and outbound an entire unit train at one time, without having it come in as manifest,” she says. (A manifest train consists of small blocks of mixed car types and cargos. A unit train is one in which all the cars are the same because they all carry the same commodity. Being able to store entire unit trains affords some of RVPR’s clients considerable economies of scale.)

Martelle says that some trains are pulled out of service and stored at the yard because they are obsolete, while others are awaiting cleaning or repair. And some others are stored temporarily because they are not currently needed. For example, some oil cars were stored recently, waiting for a hoped rebound in oil prices. “Those trains are still in storage,” she says, making reference to the still depressed prices for the fuel. Cars that never get put back in service usually end up getting scrapped. But until then, they pay storage fees to RVPR.

Martelle reports that the company has plans for installing more rails on the line, either to hold additional cars for storage or as possible sites for transloading. “We also have quite a bit of open space that can be built to suit,” she says. “We’re on an old military installation, which means that there’s a lot of open space behind tall fences that are locked all the time. It’s a very secure area in a rural community.” In addition, 10,000 nearby acres are owned by the United States Fish and Wildlife Service as an Animal Heritage site. “So there will be no building on those other 10,000 acres,” she adds.

A safe and secure location for railcar storage, switching, transloading, repair, and cleaning – that’s the Riverport Railroad in Northwest Illinois.

Check out this handpicked feature on FleetServe Rail.

WHO: The Riverport Railroad

Jo-Carroll Depot LRA – The Jo-Carroll Depot Local Redevelopment Authority is a business, industry, and technology park on the property of the former 13,062-acre Savanna Army Depot. It is located in Jo Daviess & Carroll Counties of Northwest Illinois, on the BNSF Railway and the Mississippi River, 150 miles west of Chicago. – www.lrasavannail.us 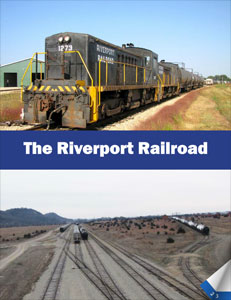