Business View Magazine interviews Chip Johns, President of Butler Automatic, as part of our focus on the industrial packaging sector.

Middleborough, MA might sound like an unlikely setting for the headquarters of Butler Automatic, the inventor and global leader of web splicing technology. But against the backdrop of historic New England, amidst the apple orchards and quaint colonial buildings, the future of packaging is unquestionably unfolding.

At the family-owned business in the heart of Plymouth County, a team of engineers is busy brainstorming automatic splicing fixes that could wipe out roll change downtime and give packaging lines a big boost in Overall Equipment Effectiveness (OEE). OEE is the benchmark measuring the efficiency and utilization of a factory’s assets. It’s an industry best practice to consistently strive for improvements in this metric because OEE identifies all preventable waste and productivity losses tied to manufacturing equipment. 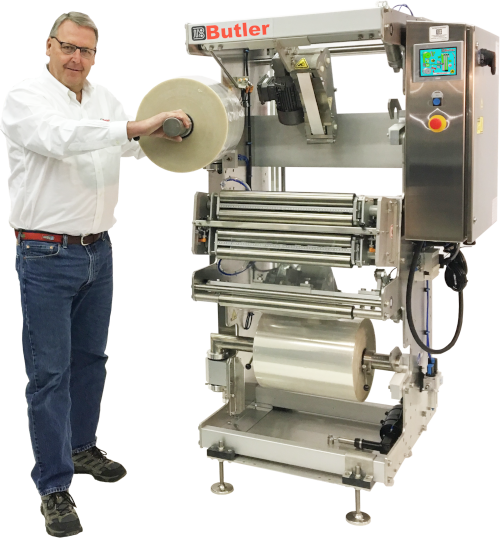 In this regard, Butler’s SP1 Automatic Roll splicer – one of three available product models – is an impactful solution that meets those needs. The Butler SP1 splicer automatically splices a new roll of film to an expiring roll in a typical pouching or bagging production line, eliminating roll change downtime and adding that gained time to overall packaging line output. The 2020 SP1 model features improved screen graphics that enhance visual feedback on process and recovery instructions, making operation and problem recovery easier for operators. The machine also comes newly outfitted with a Width Adaptive Vacuum Effectiveness (WAVE) Prep Bar, a proprietary technology that corrects web edge curl and eliminates variable web width adjustments. This, truly, is the future of roll splicing technology and with more than 2,000 splicing solutions on packaging applications alone, Butler Automatic is already well ahead of the game.

“We were the first to develop splicers,” reveals Company President, Chip Johns. “We’ve been the tech leaders for many years. Our SP1 splicer is the technological and market leader in the flexible film packaging space. We have a few competitors in the paper handling market; our advantage is that we have a large installed base and a very well-developed, very refined product line.” In addition to its Middleborough facility, the company has a cross-Atlantic parts and service office in Geneva, Switzerland, so it can deploy consultants in various strategic and operational roles throughout North America and Europe.

“We sell into a huge variety of verticals – pet food, cheese, coffee, liquids, snack foods, candy, pharmaceuticals, beverages, paper bags, wallpaper, insulation, and oil filters,” adds Johns. “We’re applicable across a wide range of uses because anybody who’s running any kind of roll-fed, continuous operation can utilize splicing to eliminate downtime and increase output. Our biggest target market is bagging and pouching. People are buying lots of different consumables that are being delivered in zippered pouches or bags. That process starts out as a roll of film; the roll of film generally runs out after 60 minutes, when an operator spends 5-25 minutes replacing the roll. Butler splicers eliminate the 5-25 minutes of downtime, providing more output.”

The company was founded in 1956 by Richard and Ann Butler who, over the course of three decades, revolutionized news printing with a patented, non-stop, zero-speed splicing technology that had been intended for a different use: that of packaging Kraft cheese. In the 1990s, foreseeing the expansion of delivering consumables in pouches, Andrew Butler, the founders’ son, pivoted the business back towards packaging. Today, the company is a leading multinational manufacturer with over 17,000 units installed worldwide, and a trusted resource when it comes to decreasing roll change downtime.

Across the board, the OEE data shows that roll changes are the leading cause of downtime in packaging lines. Butler’s solution is elegantly simple: an automatic splicing technology that joins two rolls of web stock together, without ever stopping the production line. “It could be a film that’s being turned into a bag,” Johns explains. “It could be a wrapper that’s encasing cheese. It could be paper that’s being converted to newsprint. All of these utilizations involve splicing operations.” The company’s automated method eliminates the downtime between roll changes across a range of packaging applications, from flexible food pouches (think on-the-go baby purées) to shrink-sleeve labeling (used around aluminum cans and plastic bottles), re-sealable zippered pouches (for candy, pet foods and cereals) and thermoformed packaging (for packaged meats and pharmaceuticals). 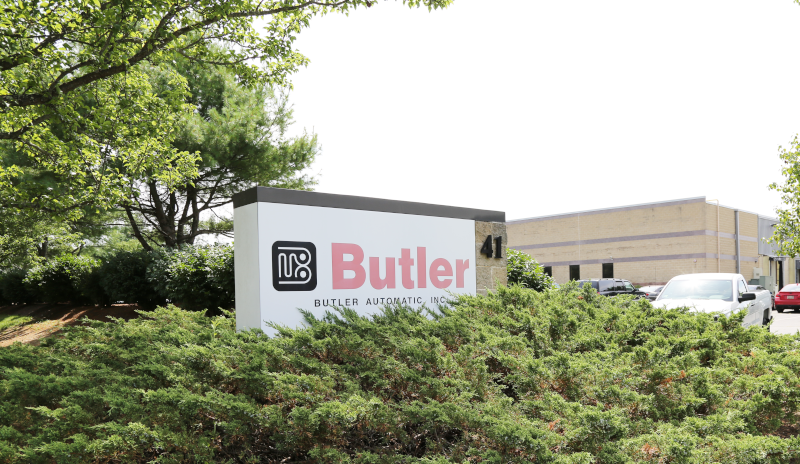 “That roll of material runs out after some amount of time,” Johns reiterates. “In some cases, it’s 10 minutes; in others, it’s 60 minutes. But when it does, you need to re-load the machine. It takes a surprising amount of time. If you can automatically splice a new roll onto the old one without halting the process, you dramatically increase your packaging line output by reducing the downtime due to re-loading.” One customer saw a three-year ROI of 622 percent after using the auto-splicing technology on their flexible cheese packaging line. Another saw an increase in gross annual profits of over $1 million thanks to their $59,000 splicer. “Our engineering resources are dedicated to building the best, most reliable, most flexible splicers in the world,” Johns affirms.

Designing and delivering the highest quality splicers to businesses worldwide wouldn’t be possible without the support of Butler Automatic’s local and international partners. “We have several strong partnerships with small fabricators and machine shops in our area,” says Johns. “We feel that having a partnership agreement with them expands our footprint, substantially, and gives us significant flexibility.” As for the bigger companies they do business with, Rockwell Automation headquartered in Milwaukee, WI provides electronic components and programmable logic controllers, while Festo, a German multinational industrial control and automation company, supplies the valves and other plumbing that run their machines.

In an age that believes strongly in product and service diversification, Butler Automatic has found success by doing quite the opposite – marshaling its forces and focusing them upon one unwavering aim. “We serve a wide variety of industries, from pharmaceuticals to pet food with everybody in between,” admits Johns. “But we concentrate on the very narrow area of splicing film together. We have some lower-cost competitors who offer a product with fewer features and lower reliability, and some small regional competitors who can offer more customized service to localized customers. But in the packaging space, we are far and away the leader. We respond to splicer problems faster than companies that are trying to do many different things.”

Being able to do so comes as the result of running ongoing improvement programs that progressively raise the bar on efficiency and output. “Over the past couple of years, we’ve instituted several ease-of-use and ergonomic upgrades to our machines,” says Johns. “We’ve improved the human-machine interface (HMI) to be more logical and more easily read by operators. We’ve set up failure analysis and failure correction screens with the HMI and within the software that allow operators to evaluate failures live and onsite. We take advantage of sensor improvements as they become available, making our sensors better at detecting differences in the properties of the films that our end-users are using. We are implementing ease of use, performance, and reliability improvements on an ongoing basis. In terms of new products, we’ve been working very closely with a few of the original equipment manufacturers to fully incorporate splicing technology into their larger pouching machines. The splicing on these new machines would be an integrated capability, not just an option. That’s been very successful at providing the end-user the splicing function with no extra footprint and, in some cases, no extra cost.”

In an ideal world of perfect packaging line executions, production downtime, delays and waste would be a thing of the past. Butler Automatic sees that world as being well within reach. “Our overall goal is to eliminate all downtime in the operation of a machine due to roll change operations,” says Johns. “Our objective is primarily to make the machines that we operate with, more efficient, and to give them higher output. What we want is to make those machines as easy to use and as automatic and automatable as possible. Whether it’s in three, five or even ten years down the road, it would be nice if the operator had to do 10 percent of what they do today to execute a roll change on one of those pouching lines.”

WHAT: A manufacturer of automatic splicing technologies