Hamtramck Michigan – The City Within a City 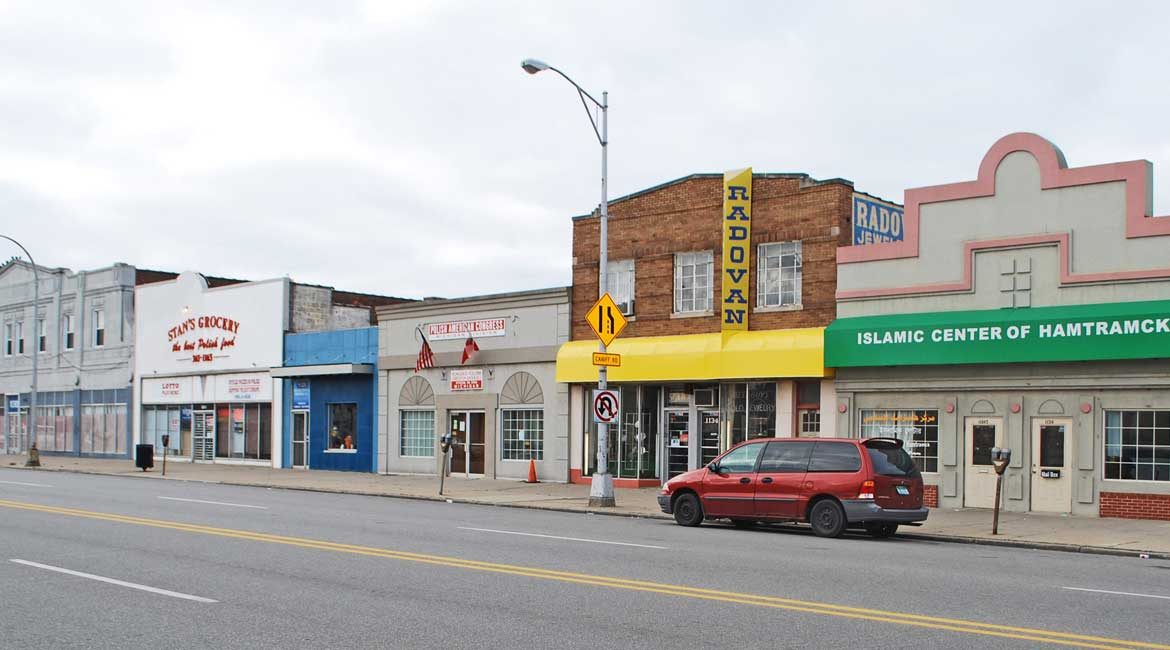 Surrounded on all sides by the City of Detroit, Hamtramck, Michigan, a city in Wayne County, was named after a French Revolutionary War hero, Colonel Jean Francois Hamtramck, and originally settled by French émigrés from Quebec. By the early 1900s, it was a German-American farming village of about 500 people. Then, with the opening of the Dodge Brothers automobile plant in 1914, Hamtramck attracted large numbers of Polish laborers and its population swelled from about 3,600 in 1910 to over 46,000 by 1920.

Hamtramck became a city in 1922, to protect itself from being annexed by Detroit. However, legal separation from its bigger, sister city could not prevent its economic fate from being intertwined with it, as well as with that of the American automobile industry. The decline of that industry, which had kept Hamtramck’s economy healthy through much of the 20th century, coupled with the Great Recession of the early 21st, has had a tremendous impact on the entire southeast Michigan region – Detroit and Hamtramck, included. In fact, both metropolises are considered to be “distressed communities,” with Detroit the most distressed city in America.

But, unlike some other nearby locales, whose populations were decreasing along with the region’s slumping economy, Hamtramck’s actually began an uptick in 1990s. Today, it is still growing, while becoming one of the most ethnically diverse and international cities in the American Midwest. Its population of 22,000 is made up of its older Polish community as well as newer immigrants from Bangladesh, Pakistan, Somalia, Yemen, Iraq, Bosnia, Ukraine, Albania, and elsewhere. This latest wave of new residents has changed the nature of Hamtramck – in 2015, it became the first city in the country with a Muslim majority on its City Council, and its economy has moved from reliance on its General Motors plant to many small commercial and entrepreneurial businesses.

Katrina Powell is Hamtramck’s City Manager. She was appointed in November 2104, by an Emergency Manager on behalf of Michigan’s Department of Treasury, to oversee the financial re-building of the city. “We started at ground zero,” she says. “The community has been in a distressed state for a very long time. We’re just now getting our finances somewhat stabilized to be able to take on some additional things. We have an amazing Master Plan; just not a lot of it has ever been implemented. So we’re starting to implement those things. I’m in the process of hiring an Economic Development Director; I just hired a City Planner. Hopefully, I’ll be able to have my Economic Development person, as well as my City Planner, work together to get things moving – addressing some of our Master Plan.”

Meanwhile, Powell outlines some of the recent infrastructure projects that the City has embarked upon: “Two years ago, our streets were in complete disarray; we had potholes everywhere,” she begins. “So, we set about doing a study on all of our roads to really understand exactly what we were working with. We know they’re bad, but let’s get a ranking on the worst streets and make sure that when we come up with a plan of what we want to do, we know where we’re going to start. We were able to get every street ranked. Then, we sat down with our city engineers and came up with a plan of attack on how we would address the needs.”

“We did several road projects last year,” she continues. “We also started doing spray patching, which tends to last five to seven years, versus cold patching which will last, maybe, a season. And, if you’re having to plow the roads, they’re not really going to last. You’re just wasting money. We felt that is was a better plan for us to do spray patching, which would allow us to build up some money in our road fund to attack a lot of the streets that still need complete makeovers. So, we spray patched most every street, and those streets that we didn’t patch, we completely re-did.

“Here in Hamtramck, many of our streets are one-way and there’s parking on both sides, because our homes do not have driveways; they have alleyways with garages. And so, those people who use their garages for storage tend to park on the street. So, we typically will only do the center lane of a street, when we’re doing a road project. And if the parking lanes on either side of the street are in pretty good condition, we just leave those and just do the center land that people drive down.”

“This year, we’re also doing numerous road projects – complete reconstruction of roads. We did another study, last month, to get an idea of how the roads changed since last year. There are some that are still holding up from the spray patching; there are others that just fell apart completely. We did that just recently and so we’re going to be attacking our roads, first thing.”

Work has also progressed on the City’s gas and sewer lines. “We had a gas main replacement project that we were partnering with DCE Energy,” Powell reports. “They replaced various gas mains around the community. They’ve been doing that every year, for the last couple of years, and that was a huge undertaking. Our community was literally torn up, last year. We also had a sewer relief project that we did, last year. It took the entire summer. Our sewers, in most cases, have not been touched for a hundred years. So, we’re replacing the crock with PVC piping. We’re lining those pipes in our alleyways. Our alleys are crumbling, so we have a plan, this year, to start working on our alleys.”

Powell explains the funding mechanisms that are paying for these various projects: “The cities in Michigan are allotted money from the state – it’s called the Act 51 Fund. Every year, the state divvies out money to every community based on a formula that was set in place back in 1951. There are two different accounts – you have major roads and local roads. So, you receive funding for each of those types. So, if we have to go in and replace sewers then we’re going to get that money from our water and sewer fund. If we have to replace the road that’s attached to the water and sewer fund, then we’ll use either a local road or a major road funding for the road. This year, we’re going to do a road resurfacing program for three of our streets; one will be the full width, the other two will be just the travel lane. We were able to come under budget, last year, for a lot of our construction costs, so we’re able to add more streets this year, than last year.

“The alleys haven’t been touched in more than 30 years, and a lot of them are so bad that they’re pretty much gravel, at this point. At one point, they were maybe asphalt or concrete, but now you really can’t tell what they were. With the alleys, we’re not allowed to use any kind of additional funding from the state. So, that local road and major road money that we get, we can’t use for the alleys. So, we’re going to be dipping into our fund balance that we were able to accumulate over the last couple of years. If I wanted to do all of the alleys it would be about $12 million.

“We’re 2.2 square miles, but we’ve got 37 miles of roadway. So, we’re going to use about $150,000, this budget year to start on the alleys, and then we’re going to use $250,000 for the next budget year. We’ll start with our business districts. Those are the most important at this point, because everyone is racing with deliveries in their businesses, so we want to start with that group, first. And then, we’ll branch out from there, based on the study that was done to attack those other alleys that are the worst.”

Another issue that Powell and the City have taken on is basement flooding: “These homes are on 30X60 lots, and there are zero lot lines; the setbacks for these homes are about a foot off the lot line. So, there’s a lot of concrete, here; there’s a lot of asphalt; there’s a lot of impervious surface the water has to run off. We also have a combined sewer system, so your stormwater and your sewer are running in the same pipes. That tends to cause a lot of problems. There is hardly any stormwater management here. When I got here, I asked about our stormwater master plan and no one knew what that was. So, we’re going to try and do that in the future to get a plan in place.

“In the meantime, we have planters that are also not conducive to getting the water out. But we are going to be starting a project this summer. We applied for a Transportation Alternative Program Grant. That is through the Michigan Department of Transportation and also the Southeast Michigan Council of Governments. We’ve applied for this grant which, hopefully, will allow us to replace our current planters that are not helping us on the stormwater side because the bottoms of them are concrete. We’re going to be replacing those, which will allow us to get some of the water out.”

Other plans include the redevelopment and/or upkeep of the City’s three business corridors. “Joseph Campeau is our original business district,” Powell says. “Back in the day, it was completely filled with clothing stores and novelty items. It was very, very successful. In the ‘60s and ‘70s, it was a thriving downtown. But now we’ve got lots of vacant businesses on that road. Then there’s the Conant Business District. On that stretch of road, we’ve got majority Arab and Bengali businesses, and you can’t find a vacant space on that road. We also have another street called Caniff and there are various businesses there, as well – restaurants, the post office, the newspaper. So, we’ve got the potential for lots of development to happen.”

Powell says she is also working on getting a grant to update a major intersection at Joseph Campeau and Caniff Streets, as well as putting in a new bike lane, there. “We’re connecting with the Inner City Greenway that Detroit is currently doing. We’re going to be partnering with Wayne County, as well, to get that in. So, we’re going to have a dedicated bike lane on Joseph Campeau. We’re going to get rid of some of the asphalt and concrete and put in medians with grass and trees to help with runoff. We’ve also got an aggressive tree program that we’re doing; we’re in the process of partnering with Wayne County and the Forestry Group to plant about 200 trees, this year.”

Finally, Powell reasserts the notion that Hamtramck’s future, just like its past, is tied to that of the Motor City. “We happen to be in the middle of Detroit, which is in a huge revitalization mode right now, so we’re trying to piggyback on that momentum. We want new businesses coming in; we want people to come here and create business that helps the residents. We want people to move into our community, not just to live here, but to work here and play here, also. Like every other community; we want the same thing.”

With a stabilizing economy and new municipal leadership, the future of Hamtramck, Michigan, the city within a city, is looking bright, indeed.

WHO: Hamtramck, Michigan
WHAT: A city of 22,000
WHERE: In Wayne County, surrounded by the City of Detroit
WEBSITE: www.hamtramck.us

TransPerfect – Helping to navigate the global... 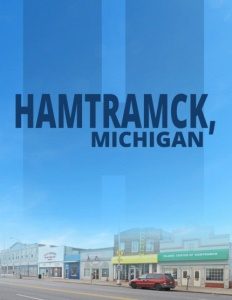