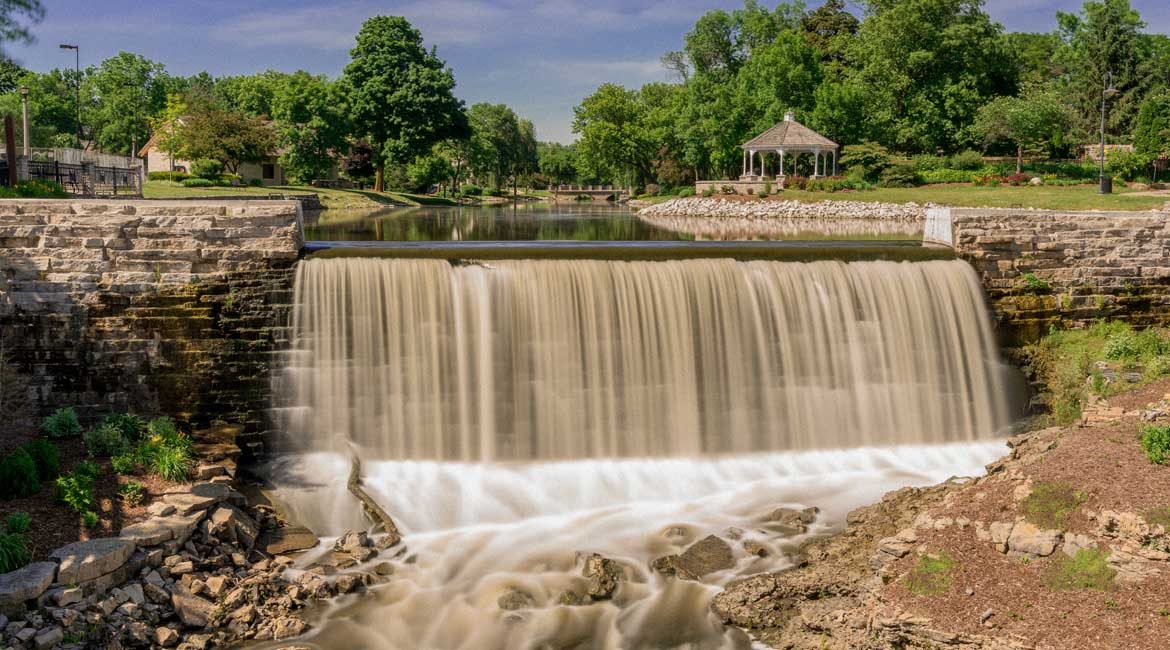 The Village of Menomonee Falls was founded in the mid 19th century as a mill town, and then grew as a small center for commerce to serve surrounding farmlands. Following World War II, significant residential growth occurred that corresponded closely with the building of the Interstate Highway System. The Village annexed the Town of Menomonee in 1958 and experienced significant industrial and commercial growth in the later decades of the 20th Century. Today, Interstate 41/US 45 runs through this scenic community, connecting it to the urban offerings of Milwaukee, and the recreational pleasures of Lake Country.

Population of the Village has grown four percent since 2010, to its current figure approaching 37,000. The Wisconsin Department of Administration predicts it will surpass 42,000 by 2035. Menomonee Falls Planner, Tyler Zwagerman, admits, “Those projections depend on how fast the build out occurs, and where we’re anticipating future single family and multi-family development to take place. Just with planned subdivisions now, and those on the drawing board, we’re expecting a couple thousand new residents.”

Educational attainment is high – more than 40 percent of residents over 25 have a bachelor’s degree or higher. The median age is just under 45 years. Zwagerman adds, “Apart from a pretty large group of residents in their 50s, our age distribution is fairly even. Our housing mix is about 75 percent single family homes, many constructed during the mid 20th century, and there was also a big boom in the 1990s and early 2000s. Single family is now just starting to pick up again. Multi-family accounts for about 25 percent of housing in the Village. Because of its diversity of age and size, our housing stock is relatively affordable for a suburban community near Milwaukee. The average value now is about $225,000.”

More than a bedroom community, Menomonee Falls provides over 30,000 jobs in manufacturing, trade, education, and healthcare. The local economy has grown stronger in recent years, and unemployment stands at around four percent. Kohl’s Corporation, a major North American retailer, is one of the largest employers. Another significant presence – Froedtert & the Medical College of Wisconsin – has a hospital and several clinics in the community. Harley-Davidson Corporation operates a large power train facility in the Village.

Matt Carran, Director of Community Development for Menomonee Falls, explains, “From a manufacturing real estate assessed value, we have the third highest value of any community in Wisconsin. Our industrial base shows up with a lot of jobs, but we’ve always had that big framework. Then we added a residential component, roughly 400 single family lots in the last three years. The recession that hit the country also had its effects on Menomonee Falls. Coming out of that now, last year we had the largest number of single family home starts in southeastern Wisconsin; third in the state from a quantity standpoint.”

Menomonee Falls still has about 30 percent of its land area undeveloped, but it’s cognizant of redevelopment; keeping the existing downtown strong, as well as commercial sectors within the community. In the last two years, 767 dwelling units have been added. From a redevelopment standpoint, Menomonee Falls has a multi-family mixed-used development in the heart of the downtown that will bring 114 units on line, and a mixed-use, 315-unit apartment complex just outside the downtown is in its final phases.

Gabe Gilbertson, Village of Menomonee Falls Planner, says commercial redevelopment has taken off in the last three years. “We have the mixed-use development on Highway 41/45, which is called White Stone Station. It has Costco Wholesale as an anchor, 300 apartment units, a 90,000-square-foot mid-box, multi-tenant building, and a 10,000-square-foot multi-tenant commercial building being finished now. It also has a Hilton Home2 Suites Hotel, and a few remaining spots for more commercial and restaurants.”

That ambitious redevelopment project was spurred by the creation of Tax Incremental District (TID) #8. Formerly a brownfield with factory and warehousing soil contamination, the TID paid for remediation of the area, in conjunction with the property owner who is now developing the land after the village cleaned it up.

Gilbertson adds, “TID is the biggest incentive tool we have for redevelopment. We have 12 TIDs altogether; nine are still active. TID #9, which is our downtown, is where we have River Walk on the Falls – a 114-unit apartment building.” Formerly an Associated Bank, that building was torn down and a developer-funded incentive was utilized to assist with the redevelopment of the parcel. Once done, it will be a downtown star overlooking Mill Pond Park.

Downtown Menomonee Falls is also home to Colonial Plaza – a typical 1960s multi-tenant strip center, built in phases that “didn’t all go together, so it had kind of a funky theme.” Two years ago, Planet Fitness became an anchor bookend tenant on the north side of the building. Then, last year, the southern end was razed to construct a Fresh Time Farmers’ Market grocery store. There will be four tenant spaces between the two anchors. Gilbertson says, “You don’t often see redevelopment of those old strip centers to this extent. Usually they sit there and decay, but this is a very cool reuse of that type of building. And once Fresh Time is done, this place will be packed all the time.”

The historic Village Hall was vacated in the 1960s and repurposed as the Fire Station, which was also recently vacated when two new stations were built. Currently, the Village is working with a prospective restaurant group on a historical preservation, adaptive reuse of the building as a restaurant with outdoor dining, making it a downtown destination that can work hand in hand with apartment living and the Fresh Times Farmers’ Market – somewhere people can enjoy during the day and at night.

In the way of green initiatives, Menomonee Falls has had many LEED certified buildings constructed in the last few years, and the Village utilizes grants to help with brownfield remediation and historic preservation.

Gilbertson notes, “The Village was awarded a Community Development Investment Grant from the WEDC to assist in the historic preservation and adaptive reuse of the Fire Station into a dynamic restaurant use. Although the WEDC does not require the use of green technology or practices, they take historic preservation into careful consideration when awarding grants. We also remediated another site downtown with the help of the WEDC and their Site Assessment Grant. The Grant allowed the property owner to take down a 1940s-era gas station, and remediate the site where eight underground fuel tanks had leaked out. Final cleanup is now in process on that site.”

To anyone outside the region, Menomonee Falls is considered an inner ring suburb of Milwaukee – with a historic downtown, extensive park system, and housing that ranges from 19th century to modern construction and everything in between. Carran extols the virtues of “a location with an Interstate that connects you rapidly to everything in the region. We’re in Waukesha County – a suburban area west of Milwaukee, that’s smack dab between the recreational activities of ‘Lake Country’ and Lake Michigan, both just 15 minutes from Menomonee Falls.”

Zwagerman adds, “The Village offers excellent amenities and services; great school districts, and public safety – in low crime rankings.” Menomonee Falls was recently designated as the safest city in Wisconsin with a population over 30,000. “We also have wonderful recreation, parks, cultural activities, and quick access to Milwaukee, less than half an hour away,” he adds. “All at a price that’s very affordable to live and to locate a business.”

With affordable housing, relatively low tax rates, convenient access to transportation, and available land, the Village has a lot going for it and is ideally poised for growth. “The great people and businesses that are already here work hard, every day, to make the community even better,” Zwagerman shares. “Even though we’re a larger and growing community, there is a tight-knit feel among businesses, among people that work at the Village, among community organizations that is pushing the community from good to great! That’s what we strive to do in our office as well.”

WHO: Menomonee Falls, Wisconsin
WHAT: A suburban village of 37,000
WHERE: Waukesha County, adjacent to Milwaukee, Wisconsin
WEBSITE: www.menomonee-falls.org 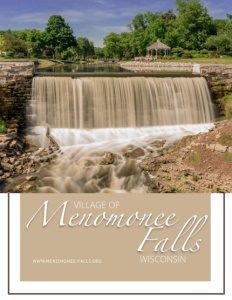