February 2015Past IssuesSupply Chain and Logistics

It’s all downhill here from here for Ed Granger.

But in a good way.

In fact, the director of sales at Quantum Storage Systems believes his company has so successfully worked its way to prominent status for customers in need of quality bin and shelving units, that the next five years shouldn’t be quite the same competitive struggle as the last five have been.

“The future is very bright,” he said. “We certainly have created demand for our brand. And I think that’s probably the biggest thing we’ve done. When people thought of bins or wire shelving, they immediately thought of two or three other companies or manufacturers before they thought of Quantum. Now, I believe that when people think of plastic bins and wire shelving, I think Quantum is more top of mind. That’s only going to get better and better as time goes on. 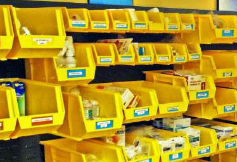 “Our competitors have been in the marketplace far longer than we have, so it was an uphill battle to get our brand as popular as their brand. But now I think people look at bins and say, ‘Yeah, get me some more of those Quantum bins’ or ‘I need some more Quantum wire, someone get us some more Quantum wire.’ I think our brand is now associated very nicely with our product.”

The company, which has a corporate base in Miami and a Canadian operations headquarters in Cambridge, Ont. – about 60 miles west of Toronto – manufactures and distributes plastic storage containers and bin and shelving systems for multiple applications, including organizing industrial space, offering a retail merchandising solution and clearing up a cluttered playroom.

Louvered panels and bench rack systems come in many sizes and allow product to be raised off a floor or bench-top surface. Single- and double-sided free-standing mobile systems are available, too, as is a full wire category that includes stacking display baskets, utility carts, security and linen carts, slanted and dunnage shelving units, alongside casters, ledges, inlay mats and labelling systems.

Ironically, Quantum began operations a generation ago as an injection-molding provider for another company that was in the bin-distribution business. That company relocated out of South Florida in the early 1990s and left its machinery behind, prompting Quantum’s leadership to go all-in toward filling the sudden opening with the expertise that the organization had already developed.

The initial product catalog was a humble six-page production that included photography done in the company parking lot, but business escalated soon after a 10 x 10 booth marked Quantum’s initial participation at the material-handling industry’s annual ProMat trade show in Chicago.

“They saw that there was a niche in the market based on what they calculated as being their costs to produce,” Granger said. “They were looking at potential margins they could make, and they were comparing that with the price of the bins that were currently on the market, and they realized they could make very good money in the market and be the lowest-cost alternative.”

The workforce has since swelled to 350 overall employees, and relationships with industrial clients are harvested and maintained by Granger and a regionally-assigned staff of six sales managers.

He said the company’s customer list numbers at around 8,000, and at least one transaction is done annually with between 2,500 and 3,000 of those entities.

The company-wide roster of manufacturing, distribution and warehousing space totals nearly 1 million square feet, including aforementioned Miami and Ontario locations, as well as three more distribution centers in Miami and additional warehouses in both Chicago and Fresno, Calif.

Quantum’s territorial service spread comprises all of the United States and Canada.
“I feel like we’re very well-balanced,” Granger said. “If one particular market segment in the United States is maybe suffering because the economy is not favoring that market segment, we have other segments that we’re well-entrenched in, so the economy in those markets might be doing better.”

Bins are still the primary revenue driver in terms of sales, though Granger said wire shelving has “exploded” and “gone through the roof” in recent years, providing the second half of a complementary relationship that’s helped overall business double since 2010.

“Wire shelving and bins are a perfect combination. It’s sort of like one is the hand and the other is the glove,” he said. “Quantum did a really good job of bringing in shelving styles that fit their bins. Just about every bin that we make has a shelving system to accommodate that size bin, so it really has melded well to become an entire system.”

The last 18 months have been a significant period

of reinvestment in state-of-the-art injection-molding machines – “the fastest and best available,” Granger said – that’s boosted production capacity by 45 percent. Prior to their arrival, he said, the company had been nearing the top end of its production potential, which was creating situations where the sales group was outselling the pace at which product was available.

Upon arrival, the machines were arranged in a manner which enabled the material handling and process flows to be trimmed down, which, in turn, ramped up production significantly. And, thanks to additional investment in warehousing and distribution space, too, enough assets are readily on hand to enable Quantum staff to “make it, stock it and ship it” with a faster-than-ever turnaround time.

“Our ability to make product has increased immensely,” Granger said, “and the gentleman who runs our manufacturing plant said that there was absolutely no way I could outsell his capacity now. He said that with a smile. We really have been able to produce much more product than we were able to in the past.” 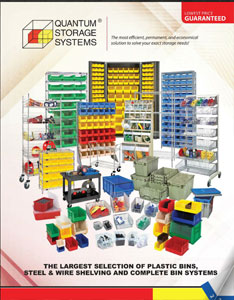