“The City of Rochester is very progressive for a small, New England town,” says Karen Pollard, Rochester New Hampshire’s Economic Development Manager. “We’re not sleepy; we have a whole different energy than many of the communities around us. We have a real vision for the future as a center of commerce and industry.”

Originally incorporated in 1722, Rochester was named for Laurence Hyde, Earl of Rochester and brother-in-law to King James II. Its first large business was lumbering, followed by mills and tanneries with power provided by the Cocheco River that runs through the city. The production of woolen blankets came next, and by the late 1880s, shoe manufacturing had surpassed textiles as Rochester’s dominant industry. The shoe industry thrived until the 1970s, when it finally succumbed to the flood of cheaper, foreign imports.

Today, Rochester is still a business-friendly community with an entrepreneurial spirit. It’s high quality of life, its skilled workforce, stable taxes, superior school system, available real estate, and easy access to transportation makes it a desirable place to launch new commercial, retail, and industrial ventures. In addition, the city government, via its Economic Development Office, has implemented a specific strategy – the creation of Tax Financing Incentive (TIF) districts – in order to cultivate the growth of new businesses.

Through the use of TIFs, municipalities typically divert future property tax revenue increases from a defined area or district toward an economic development project or public improvement project in the community. Pollard explains that once a TIF district is delineated, a baseline is set for what the value of the district is prior to development. “Once development occurs, you’re measuring the difference between the original value balance of the district and the post-development value of the district. And then, you’re capturing that increment in tax revenue,” she says. Instead of putting those future real estate tax increases into the city’s general fund, they’re used to re-pay the monies that are borrowed for the infrastructure improvements within the district. “We take that increment – the new value in tax revenue – and pay the bond for all the roads, and water, and sewer extensions, and new traffic signals.”

Rochester has created three TIF districts, so far; two that are industrial and one that is commercial. And in each case, the city has developed strong relationships with individual companies. “In the case of our industrial park, where we have two TIF districts, we have an aerospace company – Safran Aerospace, out of France – who chose to come to Rochester because of our advancement in infrastructure that allowed them to build a 345,000 square foot, state-of-the-art, aerospace composite facility,” Pollard says. Safran began construction a few years ago, and by 2018, the completed enterprise will employ approximately 600 people.

“So that’s a tremendously successful venture and our first Tax Increment Financing program,” Pollard declares. “And it continues to be a tool that we’re using to attract additional companies – some vendors and suppliers of Safran and some independent companies that just find that amount of infrastructure appealing. We have an airport, next door; we have active rail; we have a highway with public transportation; we have water and sewer capacity; we have broadband. And the city has expanded all of that with the partnership of the companies in order to make sure that we can continue to grow that industrial park.”

While the city’s commercial zone already had some activity in it, Pollard says that the creation of the third TIF district helps foster even more growth: “We created a 900-acre Tax Increment Financing district to, again, expand infrastructure; this time, with a focus on highway access points and water and sewer – more than some of the other things that an industry would need, which is entirely different than what retail and their customers would need. That district has already generated ten million dollars of investment. We are partnering with a particular developer who is committed to the job creation component, as well as generating the tax revenue to pay the $10 million bond. Phase One of a half-million square foot shopping center is open; Phase Two is under construction; and then, there’s a Phase Three that will probably be housing. That hasn’t occurred, yet, but is in the early planning stages.”

Regarding housing, Pollard relates that Rochester has available space for new housing units for its expanding population. “We are anticipating population growth and we’re trending at about six percent right now,” she says. “When Safran chose Rochester, our vacancy rate dropped dramatically as they started hiring. And they still have about 250 people to hire. So, we anticipate continued population growth and continued housing development for the near future. We’ve got 2,000 units approved; a lot of that is rental or condo-style housing, townhouses, and multi-tenant apartment buildings.”

Another growing sector of Rochester’s economy is healthcare. “Healthcare is a very important component in our community,” says Pollard. “Because New Hampshire is older than a lot of the rest of the northeast, we have a very strong hospital – Frisbie Memorial. They have an entire campus of additional services: the Joslin Diabetes Center, a cancer center, and an ambulatory surgical center which just finished construction. There are probably nine medical buildings in all that make up the hospital campus. It is right next to the airport and the major industrial park, as well. So, there’s a tremendous amount of activity in that quadrant of the city.”

Rochester also has a vibrant downtown core with historic buildings, such as City Hall and the Rochester Opera House, and Pollard says that the city works closely with developers interested in renovating some of the older downtown buildings. “We have passed the existing building code, which means that developers of an historic building have some flexibility in updating that facility for new uses. We also have an incentive for developers to invest more than 75 percent of the value of the building into the building, which is not a high threshold when you look at the value of some of these buildings – only a couple of hundred thousand dollars. So putting a hundred to a hundred and fifty thousand into a building like that is pretty reasonable. And they get a tax break on their taxes for up to 13 years, depending on what it is they’re doing in that structure, whether it’s housing or commercial. So, we’ve definitely seen people using that incentive.”

The city incorporates sustainable building principles in all of its developments and encourages it elsewhere. “Any new construction that happens or any retro-fitting of an existing commercial building will incorporate certain smart growth principles for the site plan, as well as any LEED energy-saving principles,” she states. “We don’t always require LEED certification, for example, but we do have LEED-certified buildings. There’s usually an incentive or an advantage to doing that kind of development.”

Although Rochester, New Hampshire is almost three centuries old, its focus is on its dynamic and expansive future. It is a city that is definitely slated for success.

Check out this handpicked feature on Enterprise Florida – Creating jobs and businesses.

BluIP Inc. – Redefining the future of... 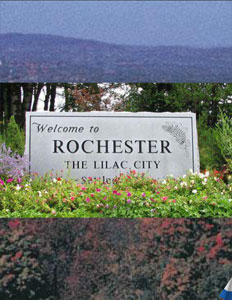