Port of Olympia Washington – Small in Size; Mighty in Sustainability 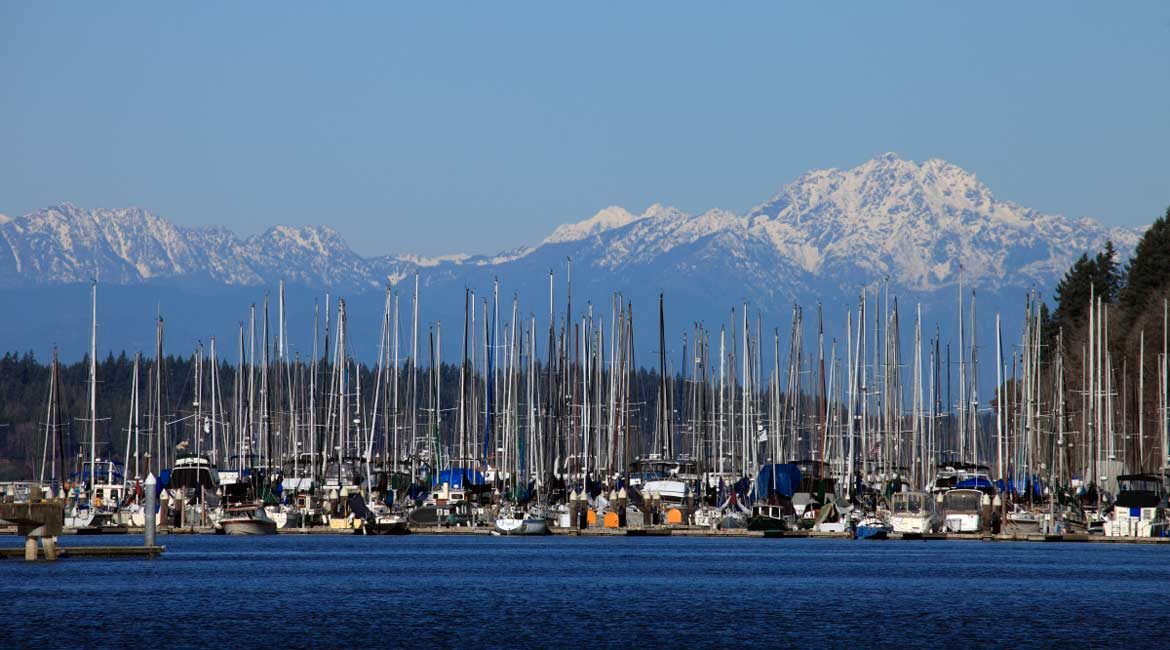 Business View Magazine interviews representatives of Port of Olympia, Washington, as part of its focus on sustainable, economic development.

Although the Port of Olympia’s history extends back to 1922, the maritime heritage of Olympia, Tumwater, and the entire Puget Sound region dates back tens of thousands of years, when the area’s first Salish residents used watercraft to transport themselves and their goods to trading and cultural sites throughout the Pacific Northwest.

In the mid-1800s, American pioneers settled at Tumwater and Olympia, and by the turn of the century they were pushing for improved marine trade access. In 1909, a deeper marine navigation channel into Olympia was dredged, and the Port Peninsula was created from the dredged material. Two years later, a public campaign to establish the Port of Olympia was spearheaded by the Chamber of Commerce. They took it to the people, and the Port was voted in on
Nov. 7, 1922.

Today, the Port of Olympia operates four primary business enterprises –  the Marine Terminal, the Airport, the Marina, and a real estate land portfolio. Financial support comes from a combination of user fees, wharf fees, and public and quasi-public funding.

Jennie Foglia-Jones, Communications, Marketing & Outreach Manager for the Port of Olympia, relates, “The Marine Terminal operation has been here the longest; international shipping is what originally established the port. In 1963 the Olympia Regional Airport was purchased along with surrounding property from the City of Olympia. We also have a real estate division, mostly for land leases. In total, we own a package of 1500 acres, including downtown Olympia, Lacey, and around 1275 acres in Tumwater. In the 1980s, we took over the Swantown Marina operation; a decade later, Swantown Boatworks was built and began operation.”

Port of Olympia’s Senior Manager of Business Development, Mike Reid, adds, “We recently went through a strategic planning exercise where we identified three primary focus areas for the Port. One of which is creating economic opportunities. That’s what our business units do: create revenue and associated resources. A second focus area is environmental stewardship. The third is creating and maintaining community assets. The fees we generate from the enterprise side, we use for general purposes. That could be promoting or doing environmental stewardship work, or providing a community asset, such as a park or trail.”

The Port does levy a nominal property tax that goes toward environmental stewardship. Rachael Jamison, Port of Olympia Environmental Programs Director, explains the role of the Tumwater Town Center in the Port portfolio: “It’s actually part of the Airport. The FAA manages airports in such a way that the airport is coupled with adjacent land whose sole purpose is to provide income for the airport, itself. Many small airports are not able to support themselves through aeronautical activities, so the non-aeronautical component provides income to keep the airport running.”

Activity at the Tumwater Town Center is based on the Port’s primary real estate model of raising revenue through long-term ground leasing. Some structured facilities provide space leasing, as well.

Len Faucher, Marine Terminal Director at the Port of Olympia, describes how the seaport competes: “Our Marine Terminal is in competition with regional and national ports for different types of cargo. In fact, we’re very active in various business development initiatives – travelling, meeting with customers, and showing them what differentiates our Port from others. We have a good story and we like to share that.”

Certain regions have advantages based on the kinds of cargo in the vicinity. Faucher explains, “We have a lot of tree farms in this area. That puts us in a good location for exporting logs for our logging tenants, Weyerhaeuser and Pacific Lumber & Shipping. There are quarantine facilities nearby for livestock, which gives us the ability to export cattle. Proximity to rail (BSNF and UP) and I-5, is good for linking into a cross-network of intermodal transportation. And I can’t say enough about the strength of our fantastic longshore workers, ILWU Local 47. They give us a great advantage in the market when we’re looking for business opportunities, and we consider them a valuable partner.”

One exciting program the Port is involved with is “Green Marine” – a third-party certification group that looks at a Marine Terminal’s environmental resiliency, and advises how it can make gains in the future.

Jamison elaborates: “One thing that really sets the Port of Olympia apart is a deep understanding at all levels of staff that the future of our business is about sustainability. All of our business units are seeking ways to do sound business in a manner that is mindful of the environment. It’s a team sport and our staff is committed.”

Prong one is addressing third-party certification. As Jamison notes, “There is a market case for third-party certification; you see it in forestry, construction, now it’s moving into businesses. We have Green Marine certification for our Marine Terminal; Clean Marina certification for our Marina operations; and Clean Boatyard for the Boatworks. We’re not just saying we’re doing a great job, we’re saying we are confident enough in the sustainability of the job we are doing to have a third party come in and validate that we are doing everything we say we are.”

Prong two: Port of Olympia is taking on climate change – through mitigation and adaptation. Since marine terminals are subject to sea level rise, the Port has joined forces with the local wastewater treatment facility, LOTT Clean Water Alliance, and the City of Olympia on an innovative project to make the Marine Terminal’s downtown location resilient to sea level rise.

Prong three: An internal climate change and sustainability team was recently convened at the Port, and is in the process of finalizing goals covering several topics ranging from integrated pest management, to increasing the use of renewable energy, to reducing the organization’s carbon footprint. The plan is to have a yearly sustainability report based on metrics. This year will be base line, and coming years will measure success toward meeting the goals. The team is comprised of staff who are deeply committed to subjects ranging from climate change to energy efficiency, waste reduction, habitat restoration, and conservation, etc.

Habitat is a serious concern, indeed there are endangered species significantly impacted by the Olympia Regional Airport. The Port of Olympia and the City of Tumwater are currently working on a habitat conservation plan, which will allow development contemplated for that area to move forward in a manner compliant with the Endangered Species Act.

The Port of Olympia is public, making it a municipal corporation with a large focus on jobs. An economic benefit study done two years ago shows the number of jobs directly and indirectly related to Port properties is tremendous for the region. The Port, itself, has 48 direct employees, plus 31 longshore that work on the Marine Terminal but aren’t Port staff. The bigger impact on employment is with the 1500-plus acres under Port ownership. Countless jobs are directly involved with the operations of the Port’s four business units; employees working for Port tenants number in the thousands.

Reid is quick to give credit where it’s due: “Weyerhaueser and Pacific Lumber and Shipping are long-term customers that do a great job as community and regional partners. On the real estate side, the Thurston County Chamber of Commerce is integral to our success. The Thurston Chamber helped found the Port of Olympia back in 1922, and has been a major player in guiding its direction ever since.”

Other noteworthy entities operating on Port property: The Olympia Farmers’ Market is a popular destination. The Hands On Children’s Museum is the most-visited museum in Washington State, and a key anchor to the East Bay district. Batdorf & Bronson Coffee Roasters are growing in national prominence. In addition, there are aviation businesses at the airport, and a variety of tenants on the industrial campus.

Reid stresses, “We’re not just branding, we are pushing this port into a place where it will be the most green and sustainable port in the United States. We may be smaller in scale to some of our other peers, like a Port of Seattle or Port of Tacoma, but we’re mighty on the idea of being sustainable and connected to the way we’re trying to do business here.

“We have found ways to incentivize sustainable development in our real estate practices. We have found third-party certifications to provide that degree of authentic monitoring of what we’re doing. We are a great location for those working in the corporate world who are looking to find a home and be part of a community. Our future goal is to establish a climate here that sees businesses operating on Port property grow, thrive, and expand. To create a platform to recruit new businesses and retain the ones we have.”

The Port of Olympia has a rich resource of land in Tumwater. “To invite a corporate presence to that area – one that shares the same values regarding sustainability, economic development, and a green triple bottom line – that would be huge for us,” says Jamison, adding, “I’m confident that our community and the greater Thurston County area are fertile for an organization like that. We have everything to tempt millennials – from recreation, to music, art – coupled with a strong economic development focus.”

This is one ambitious Washington Port, taking on the future with a commendable approach: “How can we do economic development, but be as green and sustainable as possible for strong growth?” 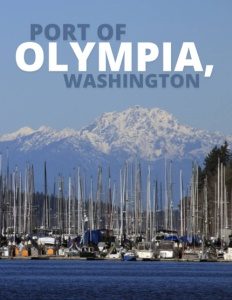