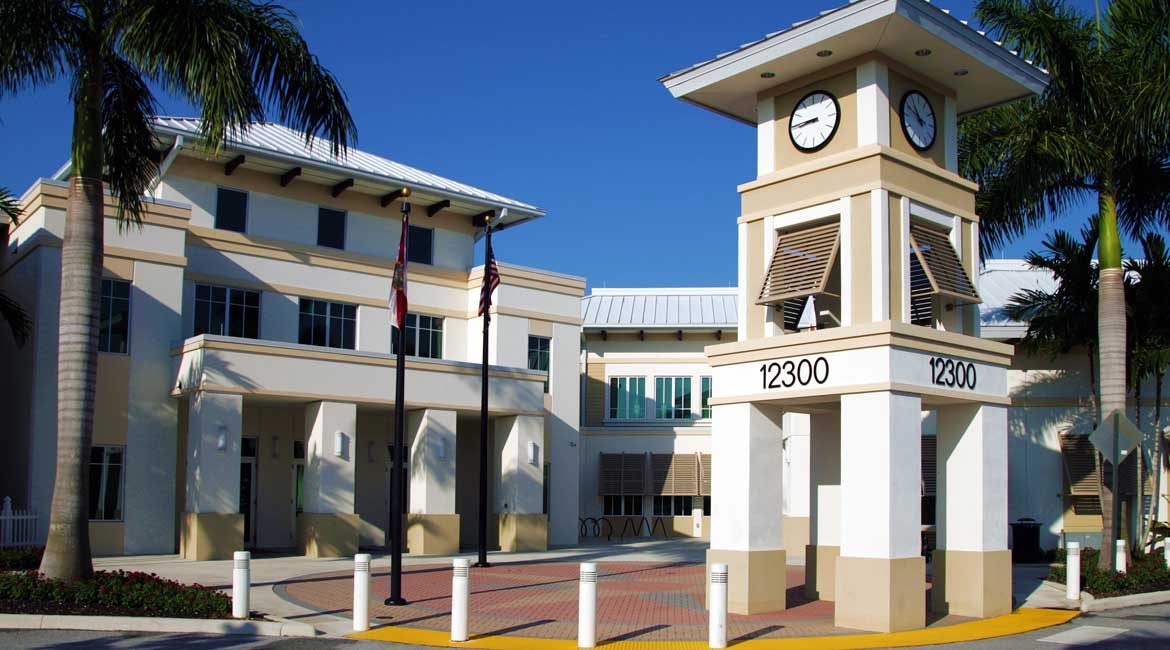 The Village of Wellington is located just west of the city of West Palm Beach, in Palm Beach County, Florida. The community was crafted out of acreage that, in the past, was often flooded and swampy, but was made suitable for agriculture in 1953, when the State of Florida passed the Acme Drainage District to provide for drainage and flood control for a tract of more than 18,000 acres. Once the waterlogged land was transformed to fertile farmland, portions of it were sold off or leased to farmers for cultivation.

One of those properties became known as the Flying Cow Ranch. They were overseen by Charles Oliver Wellington, a Harvard-educated accountant from Massachusetts, as well as a successful investor, aviator, and sportsman. The “Flying” in the ranch’s name refers to Wellington’s hobby; the “Cow” comes from his initials: C.O.W. At one time, the Flying Cow Ranch was home to the world’s largest strawberry patch. The Village of Wellington began as a planned unit development, approved by Palm Beach County in 1972. Until the early 1990s, it functioned mainly as a bedroom community, with very little in the way of commercial activity.

On December 31, 1995, Wellington was officially born as an independent municipality. For the last two decades, its population has increased from 22,000 to more than 61,000 people, and it has added approximately 2000 businesses. Last year, the Village was named by Money Magazine as one of the “50 Best Places to Live in 2016.” Today, Wellington continues to be a highly attractive, suburban, residential community with a very special attribute: it has a large equestrian community and it is widely recognized as a major center for equestrian show events – jumping, hunting, and dressage – as well as for hosting several international polo tournaments, every year.

The Winter Equestrian Festival, held from January to April, is the largest and longest-running circuit in horse competitions, with riders and horses from 50 states and 30 countries. “The equestrian component is a major element here,” says Mike O’Dell, Wellington’s Assistant Planning Zoning and Building Director. “It’s an industry that is growing; the Festival started more than 20 years ago as a two or three-week event that has now turned into 12 weeks and is expanding beyond that. Right now, there are probably 13,000 or more horses that we’re seeing travel into the Village on a regular basis as we go through the season. It’s a major component to the Village’s identity as well as a major component to our economic life.”

Another major component of Wellington’s economy is its Medical District. “We have three hospitals within our region,” says O’Dell. “One is the Wellington Regional Medical Center, which is within our boundaries. The Bethesda Hospital is the latest addition to our south, and Palms West Hospital is just to our north. What we’re seeing with those three hospitals within our region is a bit of a medical hub developing around us. Wellington has office space and we’re seeing it converted to medical space and we’re seeing specialists and other medical related practices moving into this area, filling that gap between the three hospitals. So, although we lack a major employer in our area, the medical industry is one of those areas that is growing in the Village.”

In 1996, Wellington announced its first Strategic Plan, updated in 2007 and again in 2012. While the Village is intent on expanding its range and number of local businesses, as well as attracting new residents, O’Dell maintains that keeping its hometown character is a key element of the Plan’s fundamentals, principles, and initiatives. “We’re a great family community and we’re trying to maintain that persona,” he states. “We recognize that growth is going to happen around us and, in fact, is happening, and we’re going to be competitive in that marketplace. So, when a family looks to relocate, they consider Wellington as one of their top picks in this area. We’re going to re-invent ourselves a little bit, but we’ll stick with the idea of being a village – not a major city or any kind of major metropolitan area; we want to retain that hometown feeling.”

Assistant City Manager, Jim Barnes, agrees. “At the end of the day, we’re still a suburban community and we’re not going to be a downtown urban center,” he says. “One of our biggest economic drivers is the appeal that the community has for everyone in the county. So, our economic driver is being able to maintain the appeal that brought people out here to begin with, which is great neighborhoods, great schools, great parks, and a high level of service.”

That is not to say that Wellington is averse to change. For example, one of its current initiatives is to become a more bicycle- and pedestrian-friendly community. “Two years ago, we adopted a ped-way plan,” says O’Dell. “The Village has, for the most part, eight-foot-wide pathways adjacent to its road right-of-ways, but we don’t have much associated with bicycle pathways. So, we’re working in concert with our Metropolitan Planning organization for grants to seek dollars to add bicycle pathways to our roadways.”

Another one of the initiatives mentioned in the Strategic Plan is the development of the MidTown project. When the Village was first conceived, there was no specific downtown or town center area laid out by its developers. “So, what we have done over the last ten years is created that gathering place, which we call Town Center,” says O’Dell. “It now houses Village Hall, the community center, the Scott’s Place barrier-free playground, an amphitheater, and an aquatics complex, located on the south end of Lake Wellington. We’re going to expand that to look at redevelopment. We’re looking at a project called MidTown, which is probably a twenty-year project. MidTown will build off of this core Town Center, while looking to redevelop some of the surrounding multi-family neighborhoods that are in the area. We will present to our Council at a visioning session, coming up, a program that is going to be MidTown-based. And we’re going to ask them to give us direction in regards to incentives and things that they want to see happen to further expand on the Town Center infrastructure that we have put in place with taxpayer dollars. We want to increase our density in this particular area. That means that the single-story quadruplexes and duplexes that are currently in place, may end up being multi-story buildings – three and possibly even four stories in certain locations.”

Barnes adds that replacing some older housing stock could help attract some new residents, such as the millennial generation, or Baby Boomers who might have grown up in Wellington but went off to college and never returned. “We’ve got to try and transition to be able to attract a different demographic,” he says. “The big thing is that we want to remain a great hometown and maybe change a little bit so that we stay the same. That’s the goal – a little bit of change so that you’re able to appeal across the different generations and give them cultural opportunities or a little bit more of an opportunity to have a sense of place that traditionally older planned communities don’t have. But by the same token, you want to keep all the great things that brought people out here to begin with.”

Building a sustainable future is also part of Wellington’s Plan. Planning Technician, Brandon Miller states, “We have adopted a green standard as the official minimum criteria for new government buildings and have constructed LEED certified buildings. Village Hall achieved Gold standard from the Florida Green Building Coalition in 2012, and we have recently updated that certification. We use Florida-friendly landscape principles at all public facilities. We implement green practices across all of our departments and constantly try to enhance upon these practices. We use alternative fuels in Wellington’s green fleet, and have an alternative fueling station. Additionally, we have held the title of ‘Tree City USA’ for the past 20 years.  Some smaller practices include policies requiring our electronic equipment to have conservation features, online registration for all of our recreational programs which reduces emissions, and active enhancement of our natural areas to provide habitats, nesting sites, and curtail invasive growth.”

Naturally, since Wellington was once swampland, managing its water resources and stormwater runoff safely and efficiently is imperative. The Village owns and maintains a vast stormwater drainage system to ensure that community water levels are carefully controlled. “We’re about 48 square miles in size; about ten square miles of that is in a stormwater treatment area, located to our west, which directs stormwaters through this treatment area and then it discharges into the Loxahatchee Wildlife Refuge, which we border on our western boundary,” O’Dell explains.

“The Village has spent close to $40 million to re-plumb our stormwater management system,” he continues. “Half the Village used to flow to the south and half to the north. Now, everything flows north and then goes through a major canal system along the State Road 80 corridor, and then discharges into the stormwater treatment area. That’s been a major accomplishment. And we’ve been working diligently on reducing phosphorous discharge into our stormwater. In addition, we’ve created our own, internal stormwater treatment system, known as the Marjory Stoneman Douglas Environmental Preserve. It’s a park and nature preserve with pathways, a boardwalk, and educational components, and we pump our stormwater through that system and it filters out through the marsh system that we created in there, as well.”

From swampland, to strawberry patch, to affluent and thriving community, the Village of Wellington, Florida has certainly come a long way. And as long as it continues to retain that hometown feeling, it is certainly destined to go a lot further.

WHO: Wellington, Florida
WHAT: A Village of 61,000
WHERE: A village just west of West Palm Beach, in Palm Beach County, Florida
WEBSITE: www.wellingtonfl.gov

Amerigrow Recycling – Since 1995, Amerigrow has supplied southeast and southwest Florida with mulch and soil products of the highest quality, manufactured in its own facilities. In addition to its manufacturing division, Amerigrow is a full-service, organic recycling facility that specializes in landscape debris pick-up and disposal, organic composting, terra seeding, and erosion control. Amerigrow also offers a variety of plants and palm trees for sale out of its store in Delray Beach, Florida. – www.amerigrow.com 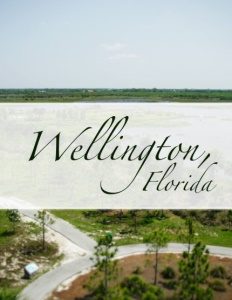