According to the U.S. Centers for Disease Control and Prevention, more than one third of the country’s adults are obese. Obesity-related health conditions include heart disease, stroke, type 2 diabetes, and certain types of cancer – some of the leading causes of preventable death. Childhood obesity is also a serious problem in the United States. Children and adolescents aged 2-19 years have an obesity rate of about 17 percent – that’s 12.7 million American children who are clinically overweight.

While the causes of obesity are complicated and diverse, it is commonly accepted that poor nutritional habits, especially the intake of too much high-calorie “fast” and “junk” foods, contributes mightily to unhealthy and unnecessary weight gain. In contrast, eating less-processed foods that contain fewer refined sugars, fewer starches, salts, and fats, and thus, fewer empty calories, is a recipe for a healthier, leaner body. In addition, junk foods are often rife with artificial sweeteners and colorings, and added caffeine and preservatives – no boon to good health.
Historically, the vending/automatic merchandising industry has been complicit in the distribution of less than healthy, obesity-enhancing products: candy, sodas sweetened with high-fructose corn syrup, cookies made with refined flour, chips fried in high-saturated fats, etc. Into this space stepped Fresh Healthy Vending, a San Diego, California vending machine company that was determined to change that paradigm and offer only healthy alternatives to traditional vending machine snack foods and beverages. 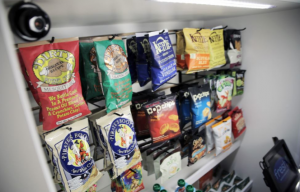 Fortunately, California was one place where the situation was a bit less anarchic. For example, in 2001, the state had introduced the Pupil Nutrition, Health, and Achievement Act, which set nutritional standards for foods sold in elementary schools. According to the law’s guidelines any snacks sold outside the federal meal program must have no more than 35 percent of its calories from fat; have no more than 10 percent of its calories from saturated fat; and be no more than 35 percent sugar by weight. Also, the only beverages that may be sold to students are milk, water, or juice that is at least 50 percent fruit juice with no added sweeteners.

So, the company began its crusade by placing machines in schools and developing a special menu of products for children. “From there,” says Yates, “we ventured into community centers, white-collar businesses, government buildings, health clubs, hospitals – anywhere we could find a captive audience and where we felt there would be a demand for health food.” Between 2006 and 2010, Fresh Healthy Vending distributed approximately 1,800 machines across the U.S. in an attempt to test the healthy vending concept and prove its validity.

Today, the company has 250 operational franchises in 45 states, Canada, Puerto Rico, and the Bahamas. Its 3200 vending machines can now be found in all the above locations, as well as in universities, YMCAs, libraries, shopping malls, hotel lobbies, etc. It distributes over 6,000 natural, healthy products made by nationally recognized brands and customized for their individual locations – for example, Kosher, nut-free, gluten-free, and other specialized menus. Top sellers are items like fresh fruit juices, protein shakes, protein bars, soy milk, organic yogurt, granola bars, cereal bars, baked chips, and baked crackers.

The machines, themselves, are manufactured by Automated Merchandising Systems (AMS), a family-owned vending machine company in West Virginia. “We started working with them mainly because they have, without a doubt, the most reliable vending machines on the market, and secondly, they had a distribution network in place that would allow us to sell a machine to somebody anywhere in the U.S. And they would – via their distribution network – schedule it to be delivered and installed, maintain a warranty on it, and provide spare parts in the event they would need it,” says Yates. “And that allowed us to build this national infrastructure that we have in place – very similar to the reason why we chose the company that we use to buy our healthy snacks and drinks from – they also deliver nationwide.”

While Fresh Healthy Vending has fashioned itself as a franchisor, it still operates some of its own machines. “Our goal has always been to franchise the concept and give other people around the country the opportunity to profit from what we call the ‘health food vending revolution.’” Yates says. “But operating corporate machines locally was, initially, a way for us to be a ‘test kitchen’ for our franchisees. It was a way for us to say ‘we not only talk the talk, we also walk the walk.’ So we operate our own machines; we test new products; we experience the trials and tribulations of our franchisees and share best practices (and also worst practices) in an attempt to make them as successful as possible.”

That success, according to Yates, is mostly achieved by franchisees who, themselves, are healthy, socially responsible, and sold on the concept. “We don’t have any franchisees that don’t understand the concept of health and wellness – that’s for sure,” he says. But Fresh Healthy Vending also offers its franchisees a unique, value-added proposition that helps further ensure that their businesses will succeed.

In return for a minimal investment in ten machines, the company procures up to a dozen locations for its new partners’ inventory. “We have about 25 ‘community wellness advocates’ that contact decision makers at locations across the country on behalf of our franchisees and convince them to take a healthy vending machine,” Yates explains. “Not only do we take the risk, we also commit to locations that meet minimum foot traffic criteria. That means that franchisees know that they’re getting the best chance to succeed from the get-go. And one of the beauties of this business is that if a machine doesn’t perform, the franchisee has the right to pick that machine up and move it to another location.”

Yates says that about 85 percent of the company’s franchisees work their businesses, part-time. “To operate ten or even fifteen machines – which is about the average – usually takes anywhere between ten to twenty hours per week. So, a lot of our franchisees are doing this on top of the job that they have. Or they have a home-based business, or another company that they run. A lot of people do this as a way of complementing what they’re already doing.”

How does Fresh Healthy Vending attract new franchise partners? “We have a fairly aggressive marketing campaign,” says Yates. “We run direct response radio advertisements, nationally; we advertise on a bunch of different ‘business for sale’ and ‘franchise’ portals online; and we also have a very heavy online presence from years and years of search engine optimizations. On top of that, we work with a PR agency to generate real news based on the concept and our franchisees launching in new communities. And from that we also generate leads.”

Yates reveals that the company’s recruitment program generates about 1,500 inquiries per month. “We have a sales force in our office here that takes the interest from the first call all the way through until machines are ready to install,” he says. However only a very few inquiries ultimately turn into new franchise owners. “A lot of people are intrigued by the concept but not really looking to buy a business; a lot of people of looking to buy a business, but don’t really understand how this works.

“They all go through a discovery process that’s comprehensive, in depth, and very detailed. It takes a minimum of about three weeks,” Yates continues. “They go through on online sales portal that has five doors – behind every door is about ten to twelve pages of content, videos, downloads – really the A to Z of healthy vending, so that by the time they get through it all, they really are well-versed enough to decide if this is something they want to do and we are also well-versed enough about them in regards to whether or not we want to choose them as franchisees and partner with them. By the time they get to the end of the process, we know they’re a good fit; they know they’re a good fit. And in the last 18 months, since we implemented this new program, we have attracted a fantastic assortment of pro-active franchisees.

“We generally appoint, on average, between six to eight new franchises a month. Our goal, right now is to find less franchisees who actually buy more machines from us; it’s easier for us to run that type of business versus a lot of franchisees with a lot of machines,” he explains. Nonetheless, Yates would like to award up to a hundred new franchises a year. 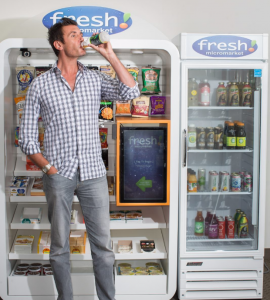 Fresh Healthy Vending also recently launched a sister product/service to its portfolio. “It’s a product called a Micro Market,” says Yates. “It’s a mini-market/kiosk that sits in a breakroom of a corporate office, or a car dealership, or a hotel lobby, and allows people access to fresh foods. We use an ILS (Instrument Landing System) operating software that allows people to grab a product, scan it, swipe it with a credit card, or pay using their mobile phone. It gives them access to sandwiches, salads, wraps, and healthy meals. So we launched that as something that we operate in San Diego; we have fifty of them on the ground that we own, and we’re also franchising that concept as well.”

Helping the company achieve its goals is its recent partnership with the American Diabetes Association and its initiative called “Wellness Lives Here.” “That’s giving us access to corporate America and the locations that the ADA has already aligned itself with,” Yates says. “Fortune 500 and 1,000 companies and beyond that.” In addition, Fresh Healthy Vending is further encouraged by the national Healthy, Hunger-Free Kids Act of 2010, which placed a prohibition on high-calorie junk food in school vending machines, as well as First Lady, Michelle Obama’s “Let’s Move” program for battling childhood obesity.

In addition to the recent launch of an expanded international franchise program that will allow Fresh Healthy Vending to distribute healthy snacks and drinks to a larger portion of the world, Yates says that his company is also planning to introduce several new franchise concepts over the next few years, all operating under one corporate umbrella.
Meanwhile, the company that offers refrigerated machines filled with healthy drinks and snacks has become the Number One Healthy Vending Franchisor in the U.S. and the largest healthy vending franchise in the world. It was recently awarded Entrepreneur Magazine’ title of Top New Franchise of 2015, and Inc. Magazine’s choice as one of America’s Fastest Growing Companies on its “Inc. 500” list.

If the health food vending revolution’s goal is simply to get healthier snacks and drinks into the hands and bodies of children and adults in an effort to combat the problem of obesity and its attendant health risks, then kudos to Fresh Healthy Vending. And viva la revolución! 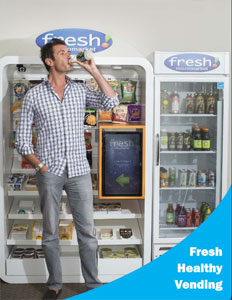