The non-alcoholic beverage industry plays an important role in the U.S. economy, with a direct impact of more than $169 billion annually and the employment of nearly 240,000 people. In addition, the beverage companies that produce and distribute non-alcoholic beverages in the U.S., and those they directly employ, contribute nearly $1.6 billion to charitable causes in communities across the nation. 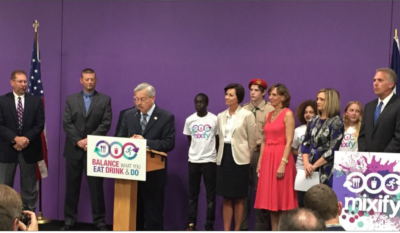 The American Beverage Association (ABA) is the trade association that represents the industry and serves as a liaison between beverage producers, distributors, franchise companies and support industries; the government; and the public. Recently, Business View Magazine had a conversation with Susan Neely, the ABA’s current President and Chief Executive Officer.
Can you begin by giving me a little bit of history of the Association? What was in the mind of its founders, what was its original mission, and what is its current mandate?
“We will be celebrating our 100th anniversary in just a few years. We were founded in 1919 as the American Bottlers of Carbonated Beverages. At that time there were about 600 bottlers who formed the Association. Their motivation was exactly what it is today for a lot of other trade associations, which is to provide a more united voice before the U.S. Congress and the federal government, generally.

“We’ve gone through two name changes and some organizational changes in the last 97 years. In 1964, we became the National Soft Drink Association, and then, more recently, in 2004, we became the American Beverage Association. Our current name better reflects the diversification of the beverage market. After all, our member companies now make many more beverages than just soft drinks, such as bottled waters, teas, juice drinks, sports drinks, and lots of new hybrids that are coming out. And the decision in 2004 was that we needed to reflect that; our portfolio is a lot broader than the traditional soft drinks – and is becoming even broader every day.

“The other big change is that we were formed by the bottlers and distributors of the beverages and the large parent companies. The beverage manufacturers, Coca-Cola, Dr Pepper, Pepsico – worked in partnership to support the Association but they were not officially member companies. It was in the early 1990s that it was determined that the parent companies should also be members and pay dues to the Association. So, those are our organizational highpoints over the last, almost, century.

“At our height in the late 1940s, we had 4,300 active members. Now, as a result of consolidation in the beverage industry, where a lot of bottlers have merged and the parent companies are much larger, we have just over 1,600 members. That still reflects the lion’s share of the non-alcoholic beverage market – about 95 percent. There are just fewer individual companies making up that share of the marketplace. The manufacturers, bottlers, and distributors are all active members and they all have similar voting power and ability to influence the Association.
“Our mission is to unite the non-alcoholic beverage industry and to achieve good public policy at all levels of government. So, whereas we began with a federal focus, we now represent the industry at the city, county, state, and federal levels. And this emphasis on achieving good public policy goes beyond lobbying. We have a robust communications focus; extensive engagement with all kinds of NGOs (Non-Governmental Organizations) that the industry interacts with; strong social media engagement; and a science and regulatory affairs department. But it is all under a broad policy umbrella. My point is that policy is now much more extensive and complex than the old days of just gumshoe lobbyists who walked the floors of the U.S. Congress. Policy and advocacy is done in lots of places around the country. We also are the General Secretariat for the International Council of Beverages Associations, so we have a global focus, as well.”

It’s fairly well-known that the industry is fiercely competitive. How do you build consensus amongst companies that are engaged in the ‘cola wars?’ Don’t they sometimes have conflicting agendas?
“The ‘cola wars’ in the marketplace are alive and well. So, in the marketplace, they’re ferocious competitors. And whenever I’m talking about the industry to community or national leaders, I’ll say ‘I think the industry is a great testament to the power of free enterprise – a good competitor makes you that much better.’ And it’s interesting and fun to watch the competition between them because one-upsmanship leads to a lot of innovation and creativity in how they do things. Of course from an ABA standpoint, a rising tides lifts all boats. Our desire is to see them all doing really well in the marketplace – that means it’s a healthy industry.

“The thing about ABA that we think is our real value-added, is that when they come to the table, that’s where we work collaboratively. And we actually see, over and over, in our research, or just talking one-on-one with elected officials and others, that people believe we are much more credible when we’re speaking with one voice. If we come in and say ‘Here’s a recommendation from these arch-rivals,’ it gets more attention because if they’re working together to try to accomplish something, then they must really mean it.
“We do have some heated discussions and different points of view. The companies look at policy from the standpoint of their own business strategies, so it takes a lot of discussion and analysis and looking at data to figure out where we can stand collectively on policy issues or other initiatives that we do together. But I think that’s healthy – from a business perspective and a public policy standpoint – and it gets us to a good place.” 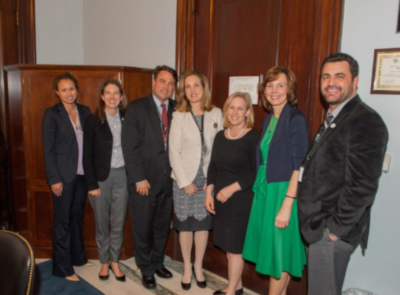 The industry has recently been under attack. Some jurisdictions have tried to limit soft drink sales, and some people have suggested that the amount of sugar in soft drinks is a health risk. What does the landscape look like for the industry over the next few years and how do you counter the negative publicity?
“I’m personally very bullish on the future of the industry for a couple of reasons. I don’t know the proprietary strategies of each company, but I know enough about plans for the investments they’re making in innovations for new beverage choices, ingredients and packages – their individual visions for where their companies are going – and I think it’s rooted in listening with a highly-tuned ear to what the consumer wants. The consumer wants more choices; they want lower-calorie choices; they want smaller portions; and I can say that the companies tune into that and are providing a lot of new things – and will continue to provide more. Nobody stands still and companies of this caliber and sophistication are not trying to run a 1990s business strategy in the new century.

“The second reason that I’m bullish is that we as an industry, and the ABA, have done some very bold and cutting-edge things. We know consumers expect brands of this magnitude to be involved in helping address societal challenges like obesity – and we are. We see it over and over in our research: consumers say, ‘No, we don’t think you’re a unique cause of the problem, but we do expect you to be in there helping provide solutions.’ And so we are.

“We had a very big initiative in the schools that we did in conjunction with the Alliance for a Healthier Generation. We listened to parents who wanted more control over what their younger children were drinking when they weren’t around, but wanted their teens to have more choices. So we changed the beverage mix in schools, removing regular soda and capping calories on other options. And by doing so, we reduced beverage calories in schools by 90 percent. We have supported Mrs. Obama’s ‘Let’s Move!’ initiative from the very start by voluntarily putting calorie labels on the front of every can, bottle, and pack, without the FDA or anybody telling us to do that. The companies agreed to do it together and we were able to standardize what those calorie labels would look like, put them in the same place, and implement them in exactly the same way. And, in our latest agreement with the Alliance for a Healthier Generation, we’re going to reduce beverage calories in the American diet. And it’s taking the whole business to do that – new products, new offerings, and new marketing and distribution strategies. So that’s something that ABA is very much in the center of – and we’re very proud of that and think it’s going to make a difference.”

What is the size of the Association’s staff and what are their main priorities?
“We have about 40 people on the staff – about the same as we did a decade ago – but we have a larger budget and larger set of priorities and programs than at that time. We’ve maintained the same level of staff because we like to be nimble and to be able to respond quickly when there’s a need. I have a very hearty, skilled band of people with different kinds of expertise that do a lot.
“Our priorities come into two boxes. We have a new website ‘Innovation Naturally,’ which speaks to our environmental leadership as an industry and shares a lot of information on our efforts in recycling, how we’ve improved our packaging, and the companies’ efforts in water sustainability. So that’s one area of focus. And the other is in the health, nutrition, and obesity-fighting space. We have a scientist on board; we have a couple of lawyers with expertise in science and regulatory affairs, communications professionals, and government affairs professionals.”
What are some of the most important points that you would want readers of our magazine to understand about the ABA?

“We pride ourselves that we are doing a thousand percent more with the same or less staff than the Association had in the last century. We are very focused on having impact; we do not just talk about things – we have a strong bias for action and we use metrics to calculate our results and make sure that we’re on point. And if we’re not, we make the kind of mid-course corrections that we need to make sure that we are having impact.

WHAT: A trade association representing the country’s non-alcoholic beverage industry 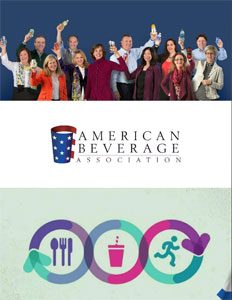