The Mississippi Municipal League (MML) is the official non-profit private organization of Cities and Towns of Mississippi. MML serves its members in a variety of valuable ways including lobbying the state and federal legislatures, and providing education for municipal elected officials, as well as technical support. The League also represents municipalities with public and private entities, and acts as a networking media for municipal members.

Business View Magazine recently spoke with MML Executive Director, Shari Veazey, and Deputy Director, Robbie Brown, about the mission of the organization and the many programs and services it offers to help members manage and grow their communities. The following is an edited version of our conversation. 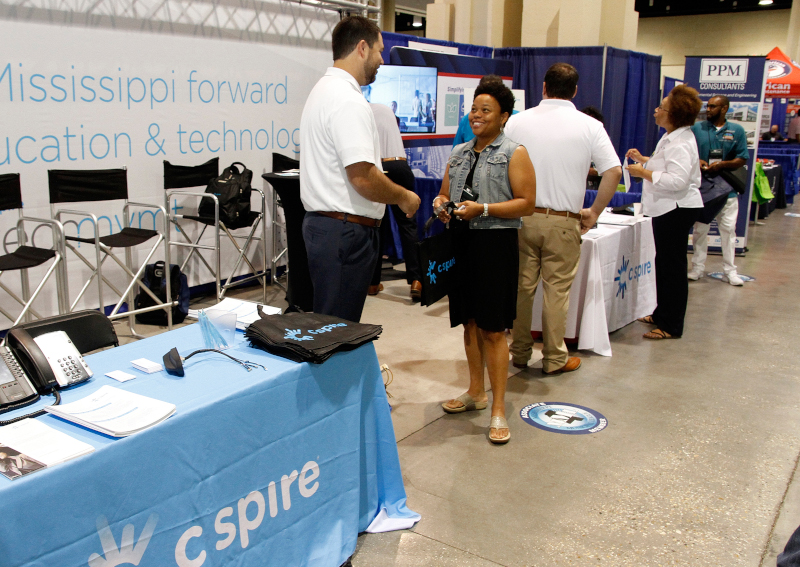 BVM: How would you describe the overall mandate of the MML?

Veazey: “The Mississippi Municipal League is a private association that was founded in 1931. We’re one of about 49 Leagues of Cities across the country. We are proud to have 94 percent of Mississippi cities as members. Our true mission is to help them excel, whether it be economic development projects; helping them learn how to be a city official when they get elected; what their role is as a council member or a board member versus their role as a Mayor or City Manager. We do advocate for our members, so we spend a lot of time researching at the legislative level and looking for ways that laws need to be changed to be more effective; to update laws that are antiquated and aren’t keeping up with technology. Funding is always a huge issue in a legislative session, helping protect current municipal revenue streams but also finding additional ways that more revenue can be available to them, particularly as it pertains to improving water, sewer, and street infrastructure.”

BVM: What educational programs do you offer?

Brown: “We have a program called Certified Municipal Officials (CMO) with Basic, Advanced, and Professional Development levels. Whether you’re a Mayor or an Alderman or a Councilman, the first level teaches the basics you need to know to do your job. Core classes include basic law; basic organization; basic finance – people come from a wide variety of backgrounds and maybe haven’t dealt with a government budget before, so we talk about municipal finance; and basic land use, covering zoning codes, etc. They take those core classes plus elective classes. In total, they get 60 hours of education to complete the Basic level.

“The Advanced level shows them how to help their community grow. It’s comprised of three core classes where we have someone come and teach community development, another teaches economic development, and the third core class has those presenters coming together to talk about how the two types of development go hand in hand. That class involves a hypothetical city. Attendees break up into groups and tackle problems like budget issues to better your community. It gives practical experience on how that would work. There are electives with that level too, for 40 hours in total.

“The last level is Professional Development where we teach how to talk to the media, public speaking, management issues, HR issues, labor issues. That’s another 40 hours. Once a member completes all three levels, they’ll have had at least 140 hours of education. They pay to come to one of our conferences and that’s where they do most of the education. The last one we had in the summer of 2019 we offered 67 different sessions they could choose to attend. Because of the COVID-19 pandemic, we’ve developed webinars to replace the in-person conferences. We’ve now done several of those for training. It’s a new world for us, we had talked about going virtual before but COVID kind of pushed us to move forward in that regard.”

BVM: Are there a lot of common issues among Mississippi municipalities?

Veazey: “Yes, obviously, the bigger the city, the bigger an issue can be. But all the municipalities have been dealing with some of the same concerns, especially during COVID. They are public bodies, so one of the first things we helped them with was figuring out how to keep their meetings open to the public in the midst of a pandemic. That’s been a challenge. Many of them have had to do video conferencing to allow members that were quarantining to call in to the meeting, as well as managing social distancing to the public that were coming to meetings.

“We’ve also had some federal funding that was appropriated by our legislature for municipalities to help with the impact of COVID. They had to look at expenses that weren’t budgeted. PPE and additional public safety expenses, enforcing emergency orders – even the smallest towns have had to deal with that. Mississippi is very rural, we only have about 15 cities over 20,000. Our largest city, Jackson, is about 165,000. The bigger cities have had more revenue loss because of COVID. Sales tax is a big driver, so larger cities saw significant lost revenue when retail shut down. Ironically, some of the small towns saw an increase in sales tax because people were sheltering at home and spending money locally at the mom and pop stores. It’s been a weird dynamic, some of the really small towns have had record sales tax revenue through the pandemic.

“When it comes to storms and weather-related issues, our role is helping them facilitate the federal assistance that comes through FEMA and navigate that process. Interestingly, our current MML President is the Mayor of Gulfport, so he is very familiar with this – the Gulf coast in 2005 was devastated by Hurricane Katrina. And in the midst of the pandemic they’ve also had to deal with the impact of several major storms this year. Some flooding and wind damage. We also have a very active tornado season in Mississippi.” 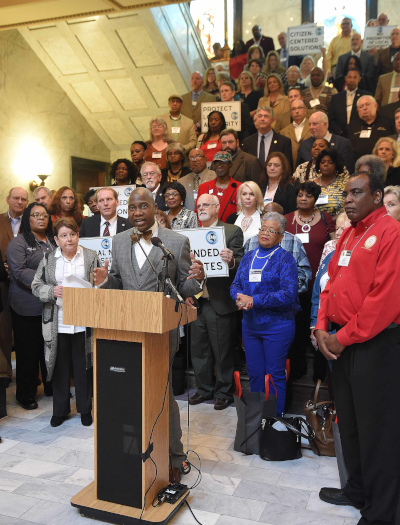 The Mississippi Municipal League Vision 2020 Mid-Winter Legislative Conference at the Hilton and Capitol building in Jackson on Wednesday, January 15, 2020.

BVM: How do you communicate with the membership?

Veazey: “We’re always working on improving the ways we communicate. We have a quarterly magazine and an active social media presence, and we send out a lot of emails. We’re moving more into text messaging now because these days people are more apt to see a text before an email. So in our next legislative sessions, if we need to send out an alert about a bill, we’ll be doing that through text messaging.”

Brown: “We put out an annual Grants & Loans book that we send to our members. In that book, they’re organized by category and we update it once a year, after I’ve talked to every state agency in Mississippi to find out what grants are available to municipalities.  Grants are very competitive, so we want our members to know where and when they can apply.”

Veazey: “Robbie is in charge of our City Hall Center which is focused mainly on small towns; it’s a clearing house of information they can go to. There’s a special section on our website and in our quarterly magazine. Just making sure the smaller towns know what resources are available because they don’t have all the people and departments that a larger city has to access information. That’s something we spend a lot of time doing. Eighty-five percent of our member cities are under 10,000 and about 55 percent of them are under 5500. So there are a lot of little towns that need some handholding and help from the League.”

BVM: How will MML continue to be a viable voice for members?

Veazey: “The pandemic has probably changed forever how we operate. But one thing we’re constantly trying to do is help them find funding for infrastructure. So our focus for the next two to three years will be helping protect their current municipal revenue stream and fighting hard against unfunded mandates getting passed down to them. We’re working really hard to build a stronger relationship with our state legislators and our federal delegation because going forward it will be more important than ever for us to be engaged at the state capital and in D.C. as well.

“So much of what our members gain from the Mississippi Municipal League is the networking with each other. We provide a lot of training but they learn a lot just from visiting with other city representatives because they’ve all had some of the same issues. Not having those opportunities to engage with each other is going to be a real challenge. You can only do so much virtually, so we’ll be looking at what other associations are doing and focusing on how to meet that challenge.”

What: Official non-profit private organization of Cities and Towns of Mississippi

Where: Based in Jackson, Mississippi