Business View Magazine interviews representatives of Coachella, California, as part of our focus on best practices of American cities.

Known as the “City of Eternal Sunshine”, Coachella, California is the easternmost city in the Coachella Valley region. Largely a rural and agricultural community in the desert, Coachella lies 28 miles east of Palm Springs, 130 miles east of Los Angeles, and just ten miles northwest of the Salton Sea, California’s largest inland lake. This area came into being as a place on the map when Jason L. Rector, known as the town’s founder, established a mesquite wood terminal on a Southern Pacific Railroad siding from where lumber was hauled to market in Los Angeles. The original name of the town, founded in 1876, was Woodspur.

In the 1880s, the indigenous Cahuilla tribe sold their land plots to the railroads for new lands east of the current town site, and in the 1890s, a few hundred traqueros, Mexican railroad track workers, took up settlement along the tracks. In 1901, the citizens of Woodspur voted on a new name for their community and, at a town hall meeting, the homeowners settled on “Coachella.” The origin of the name Coachella is unclear. Some locals believe it was a misspelling of Conchilla, a Spanish word for the small white snail shells found in the valley’s sandy soil, vestiges of a lake which dried up over 3,000 years ago.

Coachella began as a 2.5-square-mile territory gridded out on the mesquite-covered desert floor. It became a city in 1946, and in the 1950s began to expand into its present range of about 32 square miles, which contains many large, year-round agricultural corporate farms and fruit groves, particularly of lemons, oranges, grapefruit, and date palms. With a current population of about 47,000, 96 percent of which is Hispanic, Coachella is officially a bilingual city.

According to Luis Lopez, Coachella’s Development Services Director, over the past three years, the city has experienced a major boom in the areas of commercial and industrial development. “We’ve entitled close to two million square feet of industrial park projects, largely driven by the cannabis cultivation industry,” he reports. “A lot of companies are partnering with Canadian companies or Colorado or northern California-based companies and here in the Coachella Valley, we’ve created the second-largest market for cannabis cultivation and retailing outside of northern California.” 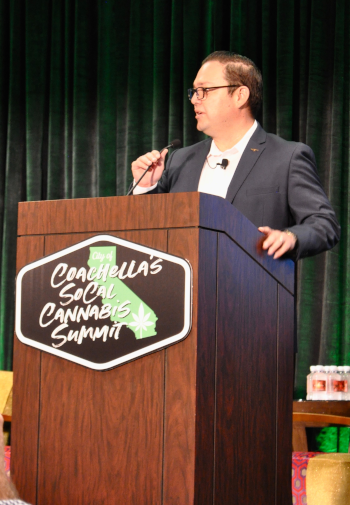 Lopez believes that several factors have contributed to the city’s growing connection to the cannabis industry. “They really like their name on their products, because Coachella has universal recognition through the Coachella Valley Music and Arts Festival; it’s a worldwide brand, even though the festivals are actually next door, in Indio. Another reason is that we have a lot of vacant industrial land that’s relatively inexpensive and we also have inexpensive power out here. Our power purveyor is the Imperial Irrigation District from Imperial County and their rates are a lot lower than Edison’s.”

As industrial development has increased, Coachella has also experienced a lot of infill development in the oldest part of the city. “Recently, we’ve seen an uptick in high-density residential development,” Lopez explains. “The housing market really lagged in the last couple of years. Because of the recession, there were only a couple of large builders that were left – KB Home was one of them, and we had a local, non-profit development company that built farm worker housing – the Coachella Valley Housing Coalition. But when they were done with their projects, the only thing we saw was one large affordable housing apartment complex and then, we had about two years of real lag in housing development until the last 12 months, when we’ve seen four major development projects take off, including D.R. Horton, the nation’s largest builder, who has now purchased two developments in the city and they’re building out what were, previously, unfinished communities. So that’s a really positive sign for us; with all the jobs that we’re creating, I think it’s fueling the housing industry.”

Another contributor to the city’s housing boom was its recent award of a grant from the state’s Affordable Housing and Sustainable Communities Program (AHSC). Administered by the Strategic Growth Council and implemented by the Department of Housing and Community Development (HCD), the AHSC Program funds land-use, housing, transportation, and land preservation projects to support infill and compact development that reduce greenhouse gas (GHG) emissions.  “That’s $15 million to do an urban, mixed-use project that includes 115 apartments and a transit hub for the central bus transfer station in our downtown,” Lopez states.

“We updated our General Plan in 2015 to create an urban center designation for the downtown that allows very high-density residential in combination with commercial,” he adds. “That set the framework for that and we’re in the process of updating our zoning codes and districts in the downtown to accomplish the next step of that implementation strategy. In addition to that, the State of California is really pushing for all of that to occur because they’ve created all of these incentives and environmental review streamlining procedures for infill development; they really want more walkability and green development like that. And because we’re a disadvantaged community, we were recently able to get a $3 million grant to do an urban greening project on the Old Highway 111, which is Grapefruit Blvd. that runs through the downtown. That involves putting in street trees, new sidewalks, pedestrian amenities, bioswales, bike paths, and that sort of thing. So, all of that, in addition to everything else that was already happening in the downtown, is a big focus for our city council. They’ve always put a lot of resources into refurbishing our downtown. We had done a lot of streetscape and park improvements; we built a new library, recently. And then, the county also built a major social service facility in the downtown. So, all of that had a lot of positive momentum and we’re transforming the city as we speak.” Economic Development Manager, Gabriel Martin, mentions another upcoming development project in Coachella – the new Hotel Indigo. “It’s going to be a $50 million investment into the city,” he notes, “and it’s slated to open in January 2020.” Hotel Indigo, built on a 35-acre site, will have 250 rooms, 51 casita-like bungalows, a 10,000-square-foot chilled saltwater pool, and an 11-acre entertainment area to host events. The resort will also include a spa, a gym, a yoga studio, multiple restaurants, a general store, a coffee shop, and the Lighthouse Cannabis Boutique, the city’s first marijuana dispensary.

Beyond downtown, Lopez says that Coachella is looking to some 3,500 acres of undeveloped alluvial hillside land east of the All American Canal that is currently being master-planned for a major new expansion of the city. (The All-American Canal, the largest irrigation canal in the world, is an 80-mile-long aqueduct that conveys water from the Colorado River into the Imperial Valley and to nine cities in southeastern California.) “They’re within our incorporated boundaries, already, and a lot of possibilities for the city’s future development is up there,” he relates. “The major challenge with the project, though, is they need close to $80 million of infrastructure just to get the first home built. We’ve been working with the state and federal governments to give us an appropriation for a freeway off ramp on I-10. A subsidy for that would really kick off development up there.”

With new industrial development, more housing, an evolving downtown, and lots of available land, the City of Eternal Sunshine is poised for growth – a point that Martin drives home. “The City of Coachella is open for business,” he states. “We have a great development services department that does a great job of fast-tracking and expediting processes to make sure that there’s no impact to developers’ production schedules or timelines. We’re a young community and we’re a family-oriented community. We’re a city that wants to grow and is ready to grow.”

Empire’s Grand Oasis event venue, located in Thermal, CA, provides a tropical setting for an ultra-romantic wedding, an authentic island party or a unique corporate event. The venue features a large lagoon with storm-bent palm trees, a refreshing waterfall, a polo field and an estate home with a chef-style kitchen.