Like many of the communities that make up Will County in the northeastern part of Illinois, the Village of New Lenox originated as a small agricultural settlement along the shores of Hickory Creek, southwest of Chicago.

Settled in the early 1830s as a result of the Black Hawk’s War, it was later expanded as a train stop by the Chicago & Rock Island Railroad, which began offering service from Chicago to La Salle via New Lenox in 1852. Soon after, several dwellings, stores, and a post office were erected in the Village, and it became quite a gathering place for the Methodist Episcopal church, whose Rock River conference purchased an adjoining grove to use as grounds for its annual camp meetings. With the railroad and railroad-owned grain elevator serving as commercial conduits, New Lenox developed a strong economy based on agricultural production, mills, wagon shops, and a butter factory. The Village’s name was taken from Lenox, New York, which had been the native home of J. Van Dusen, the first township Supervisor. 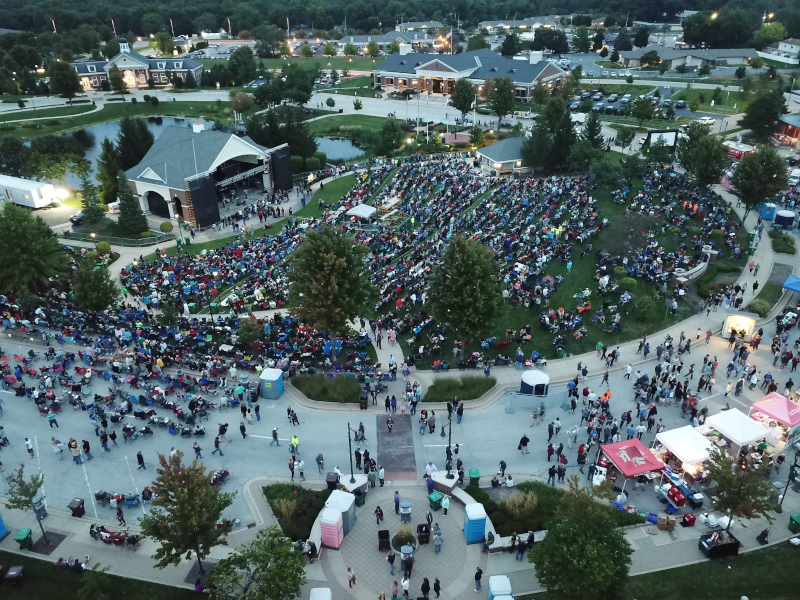 Modern-day New Lenox owns the motto “Home of Proud Americans”, an expression that commemorates the Village’s pioneer heritage and exemplifies the quality of life enjoyed by its residents. What makes New Lenox special, according to Robin Ellis, Assistant Village Administrator and Community Development Director, is how much it’s grown over the last 20 years, while continuing to preserve its small-town charm and friendly community vibes. “The residents are very supportive of the community,” Ellis asserts. “They’re supportive of local government and of our local businesses. And you really get that community feel even though, by this point, the newcomers well outnumber the old-timers.”

Economic Development Coordinator Nancy Dye attributes this aura of neighborliness to the Village’s increased participation in community engagement efforts. “There had been concerts and holiday events held in the past—we just didn’t have any that were Village-related or Village-sponsored,” she explains. The New Lenox Commons has provided a gathering space for community events for the past decade, including concerts, cruise nights, and movie nights. Amidst the pandemic, outdoor events and gatherings, like the drive-through “Trick-or-Treat event” held in the Commons last October, continued to engage New Lenox residents while keeping spirits high.

Within the Village limits live about 28,000 residents, with approximately 12,000 more inhabiting the surrounding, unincorporated areas. Last year, New Lenox welcomed 46 new businesses and issued a total of $68.9 million worth of new building permits. As for the residential side of the equation, the Village has maintained a steady number of housing permits issued over a five-year span – for a total of 1,000 – between 2015 and now.

“We’ve had some population aging, but we’ve also seen a lot of new families moving in,” Ellis reports. “The school districts really drive that; we’ve got excellent schools. The existing housing stock is selling so fast, and people are getting their prices. It’s amazing to me! I’ve seen houses where, suddenly, there’s a moving van out front and I never even saw a ‘For Sale’ sign.”

U.S. News & World Report just released their list of the top high schools in the country and in the state of Illinois. New Lenox has two public high schools in its boundaries and both are within the top 7-12 percent in the country and the state. Although COVID-19 introduced uncertainty into most major aspects of society, including schools, Ellis maintains that adaptability and attentiveness to the Village residents’ realities provided New Lenox with reliable insights to navigate the challenges.

“We learned that we needed to be flexible, and listen to what our businesses needed from us,” she recounts. “Initially, everything was shut down, including the Village Hall to some extent. But we knew that to serve our residents and businesses as best we could, we needed to provide services. So, we pivoted, scaled back staff, and figured out ways to allow our employees to work from home to avoid disruptions in service. As things slowly started to re-open, with outdoor dining and things like that, we established rules and processes to address those circumstances on a temporary basis.”

“The recruitment of retailers and restaurants came to a standstill, and those in existence were just trying to survive,” Dye chimes in. “So, the Village Board created a bridge loan program to help carry them through until the Small Business Administration (SBA) funds were extended.” 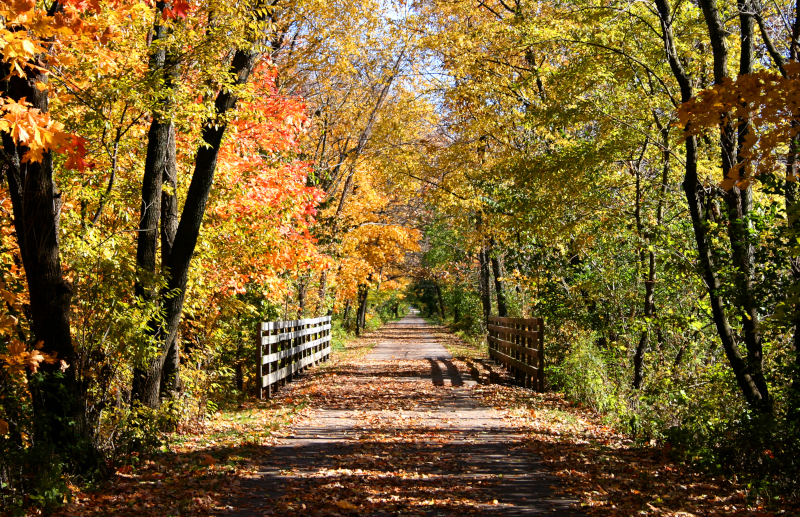 SBA loans through the federal government, in addition to corporate grants, were communicated to the Village’s local businesses via email, using a master list compiled by Dye herself. She notes, “I probably sent out 25 notifications. I didn’t want to flood them, of course. But they touched on Will County grants, state grants, and they were also just about the different requirements that restaurants had to comply with. We had a face mask ordinance to give our businesses some ‘teeth’, if you will, to get some relief if someone came into their establishment and refused to wear one. The whole point of it was to keep the businesses sustained as much as possible.”

For her outstanding service to the community, the New Lenox Chamber of Commerce named Dye the 2020 Citizen of the Year. “It was in great part because of the support that they felt from her, speaking on behalf of the Village,” Ellis shares.

The past year also exposed several trends in growing markets and revealed other opportunities in niche categories that Dye believes the Village would not have otherwise seen. “Those new areas that came through – and this is probably a national impact – were small entrepreneurial and home-based businesses,” she says. “In the last quarter of 2020, we also saw more counseling services emerging, but given how the pandemic has affected children and isolated so many of us, I think it spoke to that movement, or that need, for counselors to open an office in the Village.”

The Village is fortunate to be low on vacant commercial building stock, something Dye sees as a sure sign of economic health and confidence in New Lenox’s future, despite the pandemic’s upheaval. She states, “If a restaurant called me today and said, ‘I need a building with a drive-through,’ I’ve got nothing. They’d have to build from the ground up to get that drive-through window which, this past year, proved to be invaluable.”

The multi-tenant buildings and pad-ready sites at Cherry Hill Business Park are a great alternative option for growing businesses looking to establish an industrial warehouse on prime property. Strategically located between I-55 and I-57, with immediate access to I-80 for regional and super-regional distribution, Cherry Hill is a world-class industrial park with direct, active rail service (via the Canadian National Railroad), and prestigious corporate tenants including Michael’s, Navistar, and Titan Steel.

“That’s generally the place I’ll send people if they’re looking for a large parcel on which to build,” Dye says. “We’d also approved a Pete’s Fresh Market building on Route 30, towards our eastern limits, a couple of years ago. They came in recently with some building permits, so we’re hopeful.”

On April 1st of this year, Silver Cross Hospital, the community’s largest employer, opened its new $22 million cardiac expansion, which included a 60,000-square-foot addition to accommodate cardiovascular surgeries. Just above the new cardiac operating rooms on the hospital’s east-side addition, Will County’s only Level 3 neonatal intensive care unit (NICU) is being further enhanced, with the hospital adding two floors to the four that are already under construction. In addition to the expansion, the Village of New Lenox is proud of the accolades that Silver Cross continues to receive. In June 2020, the hospital was named one of the Fortune/IBM Watson Health 100 Top Hospitals for the eighth time. In August, they were recognized for their top patient satisfaction ratings with a 2020 Excellence Award from NRC Health.

“The hospital estimates that 5,200 people access their campus every day,” Dye says. “Those are people that may come into New Lenox and shop or eat. Their employees may want to buy a house here in the Village. And it’s really a premier healthcare campus. They’ve partnered with Lurie’s Children’s Hospital and the University of Chicago Medicine Comprehensive Cancer Care Center – the kind of medical specialties that were previously only known to be in Chicago.”

Moving forward, Dye’s goal for New Lenox is to be able to offer as many services and retailers as necessary, so that residents don’t have to travel outside the Village very often, if at all.

“We’re getting close to that,” she insists. “I haven’t been to Orland Park, which is a suburb of Chicago, in probably two years. It’s just not something that I have to do because everything is here in New Lenox. I know that’s important to our residents… they’re always excited when something new is coming. And I think that’s a testament to our willingness to be pro-business and open to development, as long as they consider our codes and ordinances, which most of them do.”

What: A friendly, pro-business community; population 28,000

Where: Will County, IL about 31 miles southwest of Chicago

SVN Chicago Commercial is a full-service commercial real estate firm complete with an in-house Property Management company.  Offering advisory services in leasing or sales across all property classes.   Please reach out to Karen to discuss your property needs and learn about the SVN Difference.

Silver Cross: the ONLY Independent Illinois Hospital to earn the ‘Triple Crown’ for Healthcare

Earning the “Triple Crown” for healthcare is a first for Silver Cross Hospital in New Lenox, and it puts us in an exclusive group of fewer than a handful of hospitals across the entire U.S. that have achieved this level of excellence in patient safety, patient care, patient outcomes and patient experience. If you want award-winning care without the commute, trust Silver Cross Hospital.