Nestled in the northwest corner of Massachusetts’ magnificent Cape Cod, the Town of Sandwich is a seaside community with a strong past and a vibrant future. As the oldest town in the region, Sandwich was incorporated in 1637, and since that time has preserved its heritage while welcoming progress and possibility. With 20,000 full-time residents, Sandwich grows by only 50% during the summer months, a sharp contrast with many of the surrounding communities whose populations swell dramatically during the tourist season.

“Sandwich has always been a working town,” says Director of Planning & Economic Development Ralph Vitacco. “It had that distinction from its first days of settlement. In the 1800s, we were a focal point for glass manufacturing. The Cape is a summer community, but Sandwich’s proximity to both Boston, Massachusetts, and Providence, Rhode Island has really given us a suburban feel. We have a very stable population. So, when people come here to start their business, they know they are going to have a steady year-round clientele, not just dependent on the summer season.”

Major industries in the community include healthcare, partly due to the older demographic throughout Southeastern Massachusetts, where the average age range is in the mid to high forties. Vitacco describes, “Healthcare is a big industry here. A lot of the hospitals from Boston have satellite offices here, and we have Spaulding Rehab Center, which is a world-class center.”

Restaurants offer another source of employment in Sandwich, with the industry seeing positive growth post-COVID. “We have a pretty decent restaurant trade. We had a few instances where four or five restaurants closed, but they were quickly replaced with others, and then in addition to those replacements, we have three new ones,” says Vitacco. 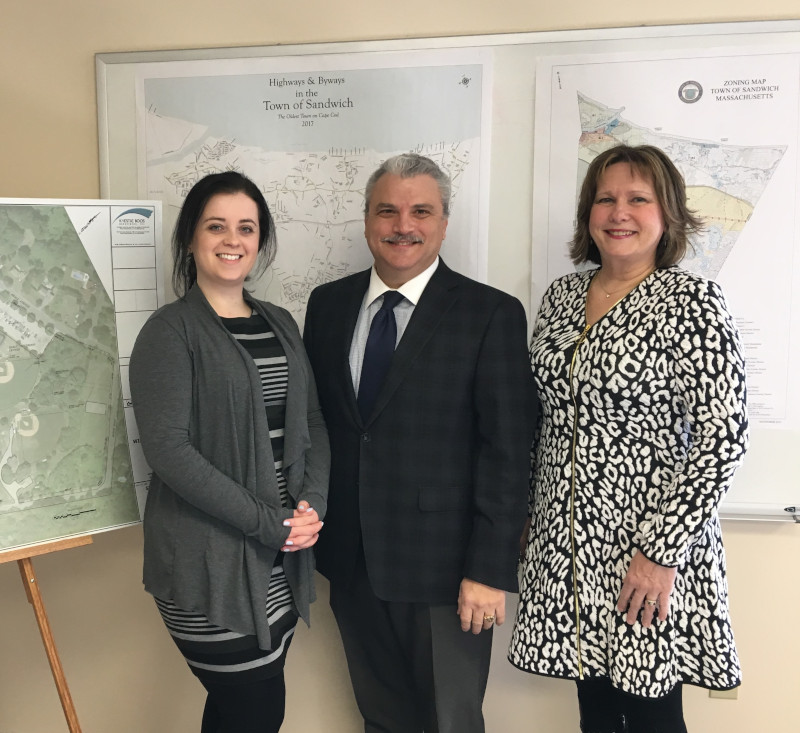 Unfortunately, the ongoing issue of workforce attraction and retention has many of the town’s smaller retail shops and restaurants, along with major chains like Dollar General operating under reduced hours. He clarifies, “They can’t stay open as much as they would like to because they can’t cover the shifts. Coming out of the summer season, you’ll see a lot of stores closed on Mondays and Tuesdays because it’s a slower day, and they just don’t have enough help to keep them open. They’ve done the math, so they close on those days, but they do a pretty robust trade over the weekend, fortunately.”

On the housing side, Vitacco reports Sandwich is made up of primarily single-family homes. “That’s about 92% of our housing stock. Like everywhere, we are looking to increase that stock to increase as we like to say, not affordable housing, but houses people can afford.” The conversion of a decommissioned school into 128 affordable seniors housing units by development company SCG is one new option in the works. This is a necessary addition to the community, as Vitacco admits, “One of the things we’ve learned is that sometimes it’s hard for older people to stay in the house, they are by themselves, with taxes and everything that goes along with homeownership. So, we have this housing development going in.” Ensuring that the building would be converted into something which would benefit the town, Sandwich has also contributed “community preservation funds” to offset the price of development and keep these units affordable.

Another development project, the restoration of the Deacon Eldred House, will be featured on the popular HGTV show, “Houses with History”. A private residence since 1757, the house was purchased by the town of Sandwich in the 70s and resold in 2022 after it was realized that they were not able to finance the restoration that the historic gem deserved.

Vitacco recounts, “We were very fortunate that through our marketing process Mike Lemieux and Jenn Macdonald came across it. They are fully aware of how to maintain a historic home and they have been working with the Massachusetts Historical Commission. We’ve done studies in the past, and it would have cost the town about $700,000. As a municipality, we have to make choices about where we want that $700,000 to go. It could go to education, or to first responders. So, it was a good choice to go out into the marketplace to see if we could find someone who will respect the building and care for it.” With the sale including a promise to open the home to the public twice a year, there is also an intention to use it as a vacation rental, a draw for those seeking a truly historical experience.

As a designated historic district, downtown Sandwich is home to a number of century homes. The town is also part of the Old King’s Highway Historic District, which includes the communities of Barnstable County, from its founding in the late 1630s until the mid-19th century. Home to a glass museum, the public library, the Dan’l Webster Inn, and several small shops and restaurants, Sandwich’s three-block Main Street area has undergone building projects over the years, but preserving the area’s historic significance remains a priority. “We do have a committee in place that helps with the preservation,” says Vitacco, noting, “A lot of those homes are privately owned, so we’re fortunate that the people who purchase the homes are intent on keeping them.” 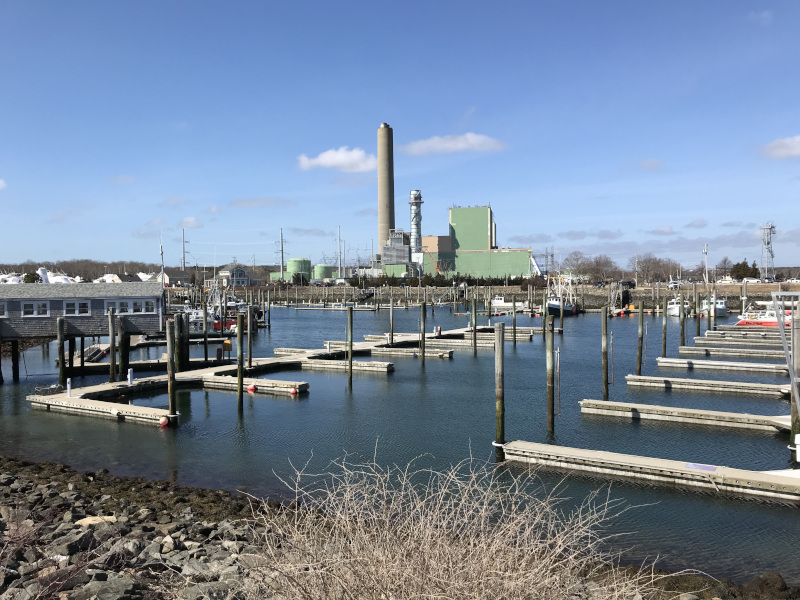 The Town of Sandwich also owns two of the buildings in the district, including the town hall, an 1830’s structure that underwent rehabilitation in 2010, and an old school house, previously used by the children of glass factory workers. “It is called Sand Hill School and the town renovated it about six years ago. We have a lot of our regulatory meetings, and our board meetings are in there now. It is pretty neat because the Historical Society hung up photos from when the school was active,” he says.

Another restoration project underway in the community is the rebuilding of a boardwalk, which was once a mode of transport for goods between the beach and the glass factory, and is now a meaningful part of Sandwich’s landscape, taking people over marshlands onto the beach. “The boardwalk has been battered about and unfortunately, in recent years, it’s taken some serious hits,” says Vitacco. Mentioning that it was the early 90’s the last time this boardwalk was rebuilt, he shares how the community had a fundraiser at that time, offering a chance to buy a board and have a name engraved on it.

“As we dismantle the current boardwalk, we were looking to return those boards to the owners if they were still around to accept them,” he conveys, adding, “Unfortunately, back in January, Mother Nature beat us to the punch and lifted up about a third of them and dumped them into Cape Cod Bay, and they came back into the Marsh.” Through a community effort, these boards were recovered and the hope is that they will still be returned to their original owners. To continue with this tradition, the new boardwalk will offer another opportunity to purchase a plank and have it engraved.

Located at the mouth of the Cape Cod Canal, the town of Sandwich is currently battling erosion. Vitacco explains, “The canal was dug about 100 years ago, and being an unnatural structure, the sand would roll around and try to make its way back into the canal. So about 50 years ago, the Army Corps of Engineers built Jetties to try to keep the sand from rolling around and into the canal. Unfortunately, it impeded the natural accretion of the sand to make its way to Sandwich’s beaches and our beaches really took a hit.”

Through a project called the 111 Study, the town is working with the Army Corps of Engineers on sand replenishment to the beaches over the next 3 years. “The barrier beach that’s the first line of defense against the nor’easters,” he asserts. “We have a marsh system. So, it’s the beach, then the marsh system, and then the main street. Without the beach, there’s water encroachment that goes from the marsh to the main street. So, we are taking steps to protect that.”

Looking to the future, Vitacco hopes to see more affordable housing options in Sandwich, suggesting, “I think that the biggest driver for economic development is having a place for people to live.” A project through the Commonwealth of Massachusetts which will see improvements to the two bridges that bring people onto Cape Cod is something he believes will benefit the town, providing easier transportation and making Sandwich a viable option for businesses outside of the region.

The possibility of bringing in a distribution center is also being considered, as the town continues to look at ways to grow. “We’re looking at making zoning changes to optimize our position to take advantage of the new way people are doing business,” he relays. “250,000 people live on Cape Cod. Sandwich is poised pretty well; we are one of the first towns you come to.”

What: The oldest town on Cape Cod, incorporated in 1637

Cibolo, Texas – Something for everybody