A town with a host of amenities to offer

Township Manager Robert Ibach says about his lovely township, “It’s beautiful here. We are part of the exceptional Parkland School District, we offer low taxes, and have a fantastic park system.”

Boasting an enviable location, Upper Macungie is around an hour north of Philadelphia and about two hours west of New York. However, with so much to do in the surrounding area, there is little need to travel to these larger cities. The township offers a perfect escape for all urbanites.

The Lehigh Valley is home to Musikfest, the nation’s largest free outdoor music festival which is organized by ArtsQuest, a non-profit organization that provides arts, culture and educational programs. ArtsQuest has expanded their offerings into Upper Macungie Township, presenting SangriaFest which is hosted in Upper Mac’s Grange Road Park. Drinks and cocktails are provided by two of the Township’s wineries as part of the popular event.

The approach to hosting events, led by the township, is just a taste of what’s to come, and the management team is motivated by how popular past events have been. “We had 2,000 people attend SangriaFest, and 400 individuals had to be turned away, which means we need to plan for larger events,” says Ibach.

The close proximity to two large metros also makes the town a perfect area for diverse industrial facilities. Daren Martocci, the township’s Planning & Zoning Consultant, elaborates, “We have a diverse selection of industries in the area, such as industrial manufacturing, warehousing, logistics, technology and sciences employers, as well as pharmaceutical and semiconductors.” 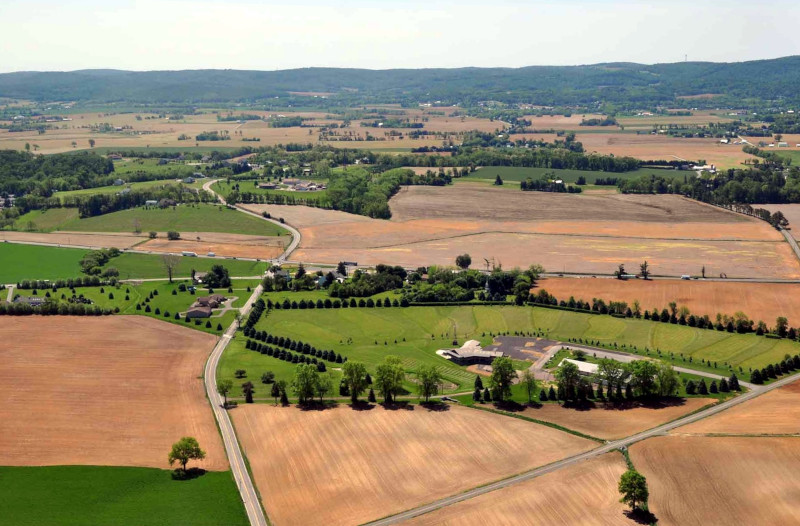 Upper Macungie is of the view that it is a great place to call home, providing work opportunities and recreational amenities, as well as offering easy access to Philadelphia and New York. Residential options range from single family homes, up-scale apartment complexes, twin-style condos for retirement, or a five-acre gentleman’s farm for those wanting an agricultural lifestyle. Upper Macungie remains in the unique position of providing all that is needed for new residents looking to put down roots.

The township’s crown jewel is Grange Road Park, which encompasses 196 acres. Currently, it has a multitude of sports fields and basketball and pickleball courts, with plans in the pipeline for new development within the next few years including a proposed community center.

Upper Macungie has a population of 27,000 residents, but due to the approximately 800 businesses that also call the township home, this number swells by 40,000 with daily commuters, according to Lehigh Valley Economic Development Corporation. Statistics from the 2020 U.S. Census show that the Township had the fourth largest increase in population of any municipality in Pennsylvania between 2010 and 2020 – the only municipalities with larger increases were the cities of Philadelphia, Allentown, and Reading.

Kalman Sostarecz, Assistant Township Manager and Director of Community Development, elaborates on these numbers, “Upper Macungie is clearly a very desirable community to live in, and our daily population more than doubles when factoring in those coming into the township to work, which is an enormous increase. Our township really functions like a city in that regard.”

The multiple opportunities of the township are aided by its significant size of 26 square miles. Upper Macungie comprises several villages that have been established as early as the mid-1700’s, and even though there has been considerable infill over the past few decades, the villages have maintained their own identities which the township planners are keen to maintain and foster moving forward.

“Some of the township’s neighborhoods are Lehigh Hills, Trexler Fields, Hidden Meadows, and Green Hills. These neighborhood names came about as residents moved in and adopted the name of the development that was first proposed. Our other smaller villages, with a post office and main street, have a mix of residences and businesses, and are a vital part of our community,” says Ibach.

The commercial side of the township is made up of a healthy blend of smaller establishments, strip malls, and on its outskirts, Hamilton Crossing, a lifestyle center comprised of high-end retailers.

Parkland School District is the public school system that serves several municipalities, including Upper Macungie Township. There is one high school, two middle schools, and nine elementary schools, and in the 2020-21 school year, a total of 9,541 students were enrolled.

There are also several workforce development programs for residents run by companies in the area, and these companies also collaborate with local educational institutions. In addition. Lehigh Valley Economic Development Corporation has also started partnering with businesses and institutions to further these initiatives.

Infrastructure in the area has lent itself well to assisting with so many businesses choosing to make Upper Macungie Township their home. “Our industrial zones follow our major infrastructure, and our industrial parks center around these routes, which allows trucks to avoid residential zones. We have Boston Beer, which bottles Sam Adams, in one of our industrial parks, a few bottled water companies, and many more,” says Martocci.

The township is required by the Pennsylvania Municipalities Planning Code to create a comprehensive plan that encompass developments, infrastructure management, government services, as well as projected growth for the area.

According to this report, the township is projected to grow steadily over the next decade. Currently, the township has more than 500 approved dwelling units that are yet to be built which are in various phases of construction, as well as several residential land development plans still in the planning process, with no signs of slowing down. Among these are plans which propose apartment units, an identified need throughout not only Upper Macungie, but the entire Lehigh Valley. To encourage this type of development, the township recently passed a Mixed-Use overlay district, allowing residential and commercial uses to exist on one property, frequently through apartments situated above retail and service-related businesses, such as hair salons or dry cleaners.

“We passed this ordinance last year and recently received our first official submission, but we know that additional developers are champing at the bit to use the ordinance,” says Martocci.

Upper Macungie’s continued growth in the industrial and commercial sectors is a story that is best told by Ibach, “Kraft Foods had a manufacturing facility in Upper Mac which was decommissioned and later sold – clearly bad news for the township and all those who worked there. A new owner began developing the property into two warehouses on speculation; however, Kuerig Dr Pepper, seeing the opportunity in the region, purchased the property and developed one of the two buildings into a state-of-the-art manufacturing plant while maintaining the second for warehousing of their product.” Currently, this plant is estimated to employ around 500 to 600 people.

The Lehigh County Authority is in charge of water delivery, while the township takes over sewerage. Together the county and township handle water conservation which needs to be handled with care as the area is home to several water-bottling plants.

Certain companies like Blue Triton Brands need to ensure that their source meets an international standard of AAA plus rating in conservation. This rating is an attractive incentive for businesses to be located in the area. A Pennsylvania program called MS4 (Municipal Separate Storm Sewer System) has an education and outreach component that helps ensure stormwater and streams are kept clean.

Along with the conservation standards, other green initiatives that the township has undertaken includes budgeting for hybrid vehicles and the replacement of street lighting with LEDs. Also, the new planned community center is proposed to accommodate a solar panel installation. 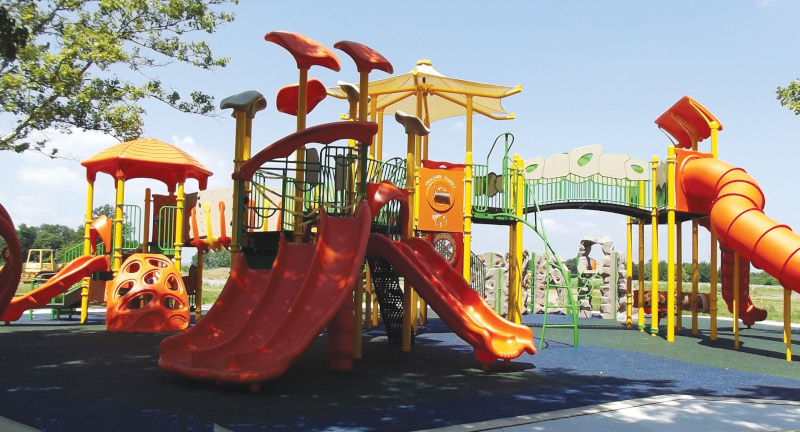 Another exciting project in the works is a “Trail Connectivity and Walkability Plan” study, out of which will come a plan for the connection of sidewalks, paths, trails, and bike lanes to allow multimodal transportation throughout the township.

And speaking of connectivity, the entire township has access to high-speed internet and 5G networks. “Our Board of Supervisors has been very proactive in passing legislation to allow 5G and eventually 6G technology. Getting this technology into places where it isn’t traditionally offered is key to our township’s developments,” says Martocci.

Having this proactive ordinance for connectivity is rare in rural areas.

While it’s great to press on with development, the Supervisors would like to maintain its farming past. In Pennsylvania, there is a three-way partnership between the state, county, and municipality where farmers can sell their development rights to get capital up front, as long as they keep farming or maintain their property as open space.

With the area being known for corn, soybean, and grapes, there are a thousand acres of permanently preserved farmland that is established through an easement. This outlook of farmland preservation also drives agritourism and agritainment to the region as tourists like to visit wineries and orchards.

The township, for the better part of a decade, has been planning to construct a community center at Grange Road Park, with construction hopefully commencing sometime in 2023. Township Supervisors and Staff would like to change the perception of the area, which is routinely associated with warehousing and trucking, toward the multitude of other amenities it has to offer, such as open spaces, farmland, community events, and entertainment. To that end, with the community center’s development, there will be access to a full-sized indoor turf field to host soccer, lacrosse, and more, as well as multi-use courts and community rooms, which can accommodate classes, parties, meetings, and more.

With excellent civil services, majestic beauty, opportunities for recreation, and a diverse business community , Upper Macungie is the place to be. And all this at an exceptionally low tax rate, with the average resident contributing around $154 per year, which is largely supported by the significant tax base provided by the industry in the area.

In the coming years, the township wants to continue to build upon the identity of an area that’s proud of its divers offerings, and securing its place in the future for generations to come.

Ironton Internet & Telephone has been providing quality voice communications for residences and businesses since 1909. Our portfolio includes high-speed internet, fiber to the home, residential phone, and cloud-based business phone systems with Ironton Global. Backed by industry-leading technology, we provide dependable, affordable, and reliable services to the Lehigh Valley.