One City, One Vision

Haines City, the third most populous city in Polk County, Florida, was originally incorporated in 1925. Its early settlers planted citrus groves, and citrus growing and processing was the main industry of the city for many years. In the latter part of the 20th century, Haines City was also home to a few tourist attractions, including Circus World, a theme park created by the Ringling Brothers and Barnum & Bailey Circus, which ran from 1974 to 1986, and Boardwalk and Baseball, featuring carnival games and rides, which closed in 1990.

Today, Haines City is still advantageously positioned in Central Florida’s tourist region – it’s thirty minutes southeast of Disney World, and a half hour northeast of Legoland. “We realize the strategic potential of our location,” says Addie Javed, the city’s Public Works Director, “and we’re trying to be one of the premier destinations for tourists and locals as they’re going east, north, or south to these other attractions.”

But Javed adds that Haines City is also priming itself for growth, both as a center for new businesses and as an attractive place to live. “We’re a hidden jewel right in the middle of the state,” he exclaims. “Our population is about 24,000, right now, and it’s projected to double by 2040. That makes us think about the future needs of our residents and also the future needs of our businesses, as we try to attract more of them to the area. In addition, we’re considered one of the most affordable housing communities in the area. If you want to be a homeowner, this is one of the prime places to be.”

Javed explains that the city is teaming up with its local Economic Development Council (EDC) and the Haines City Chamber of Commerce to attract more development. “We have an industrial park within the city limits, in the southeast corner of the city, and we’re working with EDC’s Site Readiness Program,” he says. “What that program does is show businesses that we’re open and ready for business and that we have the much needed infrastructure in place, such as utilities and transportation access. We’re in the middle of the state and you can pretty much go anywhere. Highway 27, which is one of our main north/south corridors, connects us to I-4. We’re 45 minutes away from Orlando International Airport, and we’re 60 minutes away from Tampa.”

“One of our biggest incentives that we try to offer is impact fee credits,” Javed continues. “We open the door to developers to come in and tell us how they are going to do things above and beyond the local standards to meet community needs, and then, based on that, we try to work with them to offer them credits. So, it’s less costly for them to build the much needed infrastructure and at the same time it gives them the incentive to build more houses or bring in more businesses.” The city is also working with the state’s Department of Environmental Protection to see about developing some of the brownfield sites within the city limits.

Haines City is also working on revitalizing its downtown core, both to offer new opportunities for businesses, as well as create a more pedestrian-friendly community. “We actually built the first ‘Complete Street’ in the county about a year ago,” Javed says. “We wanted to open up the community with all sorts of multi-modal opportunities for our residents, so you can bike and walk. We’re working on a Haines City trail system that goes straight through our downtown. We completed Phase One last year and we’re working towards completing Phase Two in the next few years.”

Javed adds that that first complete street also serves as a gateway to one of Haines City’s premier destinations – the Lake Eva Event Center, which received a $30 million renovation about ten years ago. Located on the shore of Lake Eva, the Event Center hosts business meetings, conferences, weddings, receptions, banquets, and parties. The nearby Lake Eva Community Park is home to several annual, local events including, “Thunder on the Ridge,” a large fireworks show, “Ribs on the Ridge,” a barbeque competition, and “Ironman 70.3,” a family-friendly, triathlon event.

Javed says that the city is also working to preserve the quality of its lakes by implementing best management practices. “We’re probably one of the first cities in the area working on low impact development,” he states. “We’re working with the Water Management District on design and construction of rain gardens and bioswales in our downtown area. We want to clean the water quality of our rain water before it goes into our lakes, and by implementing these LID techniques, we’re able to treat the water before it either goes back into the aquifer or back into our lakes. And we’re doing this all over the city. It’s a three-year project. We’ve identified the first phase and, right now, we’re in the construction phase of the project.

“One of the main concepts behind the project is ‘One Water.’ What we mean by One Water is that you can use the integrated water resources management to look at the multiple ways you can use storm water – you can use it for recreational use, or you can also use it for water supply by treating some of the surface water and putting it back into the ground. One of the other options we are looking at is to see if maybe we can augment reclaimed water with surface water and dump that back into the aquifer after running it through a series of treatment trains.”

“We’re big on trying to protect our lakes,” Javed asserts. “We’re trying to see if we can connect the different lakes – for example, if one lake has a better water quality and another lake may have more nutrients in it. We have a project in the hopper, right now, called the Lake Eva/Lake Henry Restoration Project. Lake Eva has some water quality issues, whereas Lake Henry has flooding issues. By trying to connect the two lakes, we want to clean the water even more before we divert that additional rainwater from Lake Henry into Lake Eva. We’re in the feasibility study phase, right now. We’re looking at all different options. The lakes are less than four miles apart, and there are some natural canals and ditches in the area. What we’re looking to do, instead of trying to connect the two lakes with pipes and pumps, is to use the natural wetlands and the canal system and see if we can use Mother Nature to our benefit. There’s an elevation difference of about ten feet between the two lakes, so that also works to our benefit.

“We’re also trying to promote local businesses and industries to use reclaimed water for irrigation purposes. We’re working on a project called RIBS – Rapid Infiltration Basin System. We’re trying to offer that as an opportunity to the businesses. We also have a pretty active water conservation program with the Water Management District, where we’re offering incentives to residents for using less water.”

“We have a lot of different things going on in Haines City,” Javed says, summing up. “We’re at the cutting edge of going into this century with a lot of exciting opportunities. Our mantra, right now, is ‘Haines City, Forward – One City, One Vision.’ We’re open for business and we’re dedicated to re-inventing our present and building for the future.”

WHERE: Polk County, near Disney World 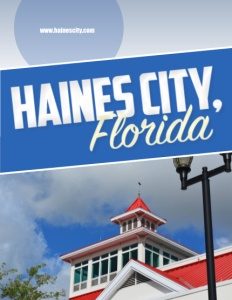