Palm Springs, a desert city in California’s Coachella Valley, has been a fashionable resort destination for over a hundred years. Known for its hot springs, stylish hotels, golf courses, spas, boutiques, and hip restaurants, as well as for its natural beauty, the city plays host to over 1.6 million visitors a year. In the center of town, and only 1.5 miles from the Palm Springs International Airport (PSP), sits the Palm Springs Convention Center, the area’s premier venue for conferences, meetings, and events.

The Palm Springs Convention Center first opened in 1989, and according to Rick Leson, its Director of Sales & Marketing, the facility was less than half the size than it is now. “The exhibit hall was about 40,000 square feet, which is pretty small, when you consider the size of conventions centers, these days,” he says. “In addition to the exhibit hall, there were eight small breakouts, many of which had air walls which opened up onto a hallway and then into the exhibit hall; so we could actually grow the exhibit hall from 40,000 to 50,000 square feet, if need be. As the first convention center in Palm Springs, it was pretty much the correct size, given the type of business that we were attracting at that time.”

Today, the Center offers 120,000 square feet of carpeted exhibit space, 21 breakouts, a 20,000 square foot ballroom, an 18,000 square foot lobby with panoramic mountain views, and a 20,000 square foot event lawn. The facility’s last expansion was completed in 2006, and Leson says that it was mostly at the behest of the city’s hotel operators who began witnessing a loss of business due to the Center’s relatively small size. “It was the hotels who pushed for the expansion and putting a bond measure on the ballot allowing for a two percent increase to the Transient Occupancy Tax to finance the project. And due to the expansion, we’ve been able to continue to grow with our clients’ needs. We were even able to attract some of the groups that we had lost.”

Approximately 75 percent of the Center’s business comes from associations – both California and nationally-based. Leson explains that most of the corporate businesses that come to Palm Springs tend to hold their events at one of the area’s resort hotels because they offer more amenities, such as golf and tennis; although for the millennial generation, Leson believes that these amenities are less important than their desire for immersion in Palm Springs’ local culture.

The Palm Springs Convention Center, itself, is physically attached to the Renaissance Palm Springs Hotel, which offers an additional 30,000 square feet of meeting space and 410 guest rooms. “Because of our ability to offer sleeping rooms and meeting space in one building, we’ve become a very strong ‘association house,’” Leson explains. “It makes it very easy for groups that are looking for a lot of meeting space and hotel rooms that are under one roof. We are kind of the perfect, first step for those groups that are struggling with outgrowing hotels and now have the need to move into a convention center.”

Because of our demographics, our Center does not do a lot of consumer shows, “like you would see in big cities; we don’t have the population to support that here,” Leson says. “This is one of the main reasons why convention business is so important to our destination. As far as weddings and those types of social events, we’re competing with the 100-plus country clubs that are associated with each of the golf courses that are out here. There’s so much competition for weddings and other social types of business.” What fills out the rest of the Center’s 100 to 120 yearly events calendar are local fundraisers and major events, such as the Palm Springs International Film Festival, a two-week affair that takes place every January.

Regarding its regional competition, Leson says that because of the climate and other similarities, the Center competes heavily with Phoenix and other Arizona destinations for business, and to a lesser extent, with San Diego and Anaheim. “We generally believe that we are not competing with any convention centers in northern California, though,” he says. “It’s rather a sharing of clients because of the association groups that do a north/south rotation – they’re north one year and then south the next year.”

The Center also shares business with other SMG-managed facilities in nearby Ontario and Long Beach, California. “The draw is different in all three cities. Ontario and Long Beach are very busy on the weekdays and not as busy on the weekends. It’s the opposite for Palm Springs – we’re always looking for mid-week business, where weekends are extremely busy just with transient guests coming in from L.A., San Diego, and Orange Counties. We have the ability to share groups. If we have a weekend group that we can’t accommodate, we’ll share client information with our sister properties. That’s another benefit of being managed by SMG. So, there’s competition but there are also events that work out and benefit all of us.”

Back in 2006, when the City first made the decision to expand the size of the Palm Springs Convention Center, Leson relates that there were several hotels planned for construction in order to accommodate the expected increase in attendees at the larger meetings and events. “Then in 2008 through 2010, with the downturn in the economy, the funding fell through for many of these projects,” he states. “We went through a period where we had a nice, new, larger convention center, but didn’t have large hotels surrounding it to handle the increase in sleeping rooms that were required. Now that the economy has turned around again, we’ve got three hotels on the drawing board, two of which are probably about halfway done. One is a 150-room Kimpton Hotel, located about 3 blocks away, that we anticipate opening in the spring of 2017. We then have another 150-room Andaz by Hyatt product – also slated to open in 2017. Virgin Airlines is also looking to open a third hotel, right downtown, which will be about three blocks away.”

In addition to the new hotels about to open, Leson touts the Palm Springs Convention Center’s other advantages: “We’re one of the few convention centers in the country that offers a fully carpeted exhibit hall. That’s one of our biggest selling points. We also stress our location. We’re about one and a half miles from the Palm Springs International Airport; we’re three blocks away from a downtown area that has restaurants, attractions, and nightlife. We call ourselves ‘The Meeting Oasis.’ It’s a great place to get some work done, but also to go out and experience the natural beauty of the canyons and the mountains.”

Check out this handpicked feature on The Columbia Metropolitan Convention Center.

WHO: The Palm Springs Convention Center

WHAT: The area’s premier venue for conferences, meetings, and events

Why is Energy Efficiency Important to Businesses? 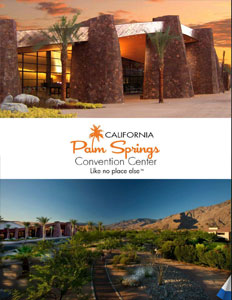