Small in size – big in service

Columbia, South Carolina is city rich in history. In May 1540, a Spanish expedition led by Hernando de Soto traversed what is now Columbia when it was inhabited by a native people – the Congaree. One of America’s first planned towns, Columbia was created in 1786 by the South Carolina General Assembly as the site of a new state capital. By the beginning of the 19th century, when the University of South Carolina was founded in Columbia, the city’s population was nearing 1,000.

Columbia became chartered as a city in 1854, and throughout the 1850s and 1860s, it was the largest inland city in the Carolinas. Virtually all of its commercial and economic activity was related to the cotton trade and the institution of slavery. In 1860, the city hosted the South Carolina Secession Convention, whose delegates drafted a resolution in favor of secession by a vote of 159-0. Columbia was virtually destroyed by fire in the waning months of the Civil War, but managed to rebound from the 1865 conflagration within the first few years of Reconstruction.

By the 20th century, Columbia had emerged as a regional textile manufacturing and trade center. Camp Jackson, a U.S. military installation received its first recruit in 1917 on the eve of the First World War. In the 1940s, Lt. Colonel, Jimmy Doolittle trained his B-25 Mitchell bomber pilots at what is now Columbia Metropolitan Airport. In the 1990s and early 2000s, Columbia saw a revitalization of its downtown, and created the Congaree Vista District, the city’s premier location for commercial, residential, shopping, dining, and cultural offerings.

According to the Columbia Metropolitan Convention Center’s Vice President and General Manager, Mack Stone, planning for the facility was spearheaded by three governing partners: the City of Columbia, Richland County, and Lexington County. A commissioned study showed that there was a need for a space that could accommodate the larger events that couldn’t fit into any of the local hotels. “There was an agreement that was signed among the three entities approximately two and a half years before the opening of the building,” Stone says. “Each agreed to start charging three percent on each hotel room and to use that money to fund the debt and the operating expenses for a convention center. And when the actual construction started, bonds were sold.”

Because of its size, the Columbia Metropolitan Convention Center is referred to as a “boutique” facility. It doesn’t host many large consumer trade shows; its clients tend to be smaller regional associations, and local organizations and groups. “We do everything from the bar exam for the Supreme Court of South Carolina to a Congregational Synod,” Stone says. “We do about 350 events a year – some are daily events; some are several days. We structure our booking policy so that hotel room night events get preference over the amount of time or how long out they can book in the building. And then the local events, we don’t book those before a year out. Thus, we try to give the break for the availability for dates to the people that actually pay the freight through the tax and then we continue to fill the building with local business. What happens is that local events want weekends, and association events want during the week, so it kind of works out well for us.”

Sarah Britt is the Columbia Metropolitan Convention Center’s Director of Sales. She believes that being a “boutique” center both allows and requires that the facility extend a high level of customer service to its attendees. Center management communicates constantly with event planners, before, during, and after an event. “We get to know each one of our clients and their event to the point where we even know their favorite kind of wine,” she states. “And because we’re limited on exhibit space, it allows us to do an extremely high volume of food and beverage events and conferences. The culinary that we provide is unique for a conventions center; we customize more than 80 percent of our menus.”

Andrea Mensink, Director of Communications for the Midlands Authority for Conventions, Sports & Tourism adds, “Our team goes above and beyond, acting as consultant and helping make meetings be as successful as possible. There’s a high level of trust between the planners and the members of our team.” And that strategy seems to be working – approximately 80 percent of the Columbia Metropolitan Convention Center’s bookings come from repeat customers.

If the facility has any problem at all, it is one of space – there’s not enough of it. “We’re fuller than we can handle,” says Britt, “and hoping for expansion.” Stone agrees. “We are too small,” he says. “We are turning away business.” But what is going to control the facility’s potential future growth is whether or not it can find enough parking for its patrons. “There is a parking lot that we can put another 75,000 square feet of exhibit space and meeting rooms. So, we have to solve where we’re going to park the people that are coming to the facility if we take the parking lot to expand it,” he says. “There is also some possibility of cantileving the facility over the street, which would be something that we would like to explore. The parking lot and over the street are the only two places that we have.”

Stone adds that he would also like the Columbia Metropolitan Convention Center to connect with the neighboring Colonial Center, which is the venue for the University of South Carolina’s basketball team. “I think the University is open to that and I think we can come up with a win-win situation in that respect. We do have shows that come in that use both of the facilities, so we are already working together and I feel like we’re pretty good friends. So, maybe down the road, we can make a deal that will work for everybody.”

Meanwhile, the Columbia Metropolitan Convention Center continues to improve its existing physical plant. It was organizationally structured to set aside a certain amount of funding each year for technology, furniture, and equipment upgrades in order to keep the 12 year-old building fresh and attractive. Recently, the facility replaced all of its carpeting; replaced all of its lounge furniture with new modern pieces, some with built-in charging stations; added interactive touch screen digital way-finding signage at entrances, along with flat screens outside of every room to list event information; and replaced its house phones with complimentary charging stations, offering cords compatible with almost any device. “We’ve beefed up our Wi-FI twice since the building was opened because the demand required it,” Stone adds.

In an effort to save energy and expenses, the Columbia Metropolitan Convention Center has also created a Sustainability Committee to recommend and implement a variety of sustainable practices. Britt is the committee’s chairperson. “We’ve made a lot of improvements over the last year and a half,” she says. “Two of our biggest things is reducing our waste and reducing our energy costs. We just replaced all of our trash cans in the facility and now each trash can is a trash and recycling unit. We also just started a composting service; we compost all of our kitchen waste. We also recycle used cooking oils for biodiesel. As far as reducing energy we’ve budgeted to replace all of the light bulbs in the building with LED. We replaced our building automotive control system with a new system that increases the level of control we can have over heating and cooling. We’re forecasting a savings of about $40,000 a year on heating and cooling costs. All of the toilets and sinks in the building are low-flow to try and eliminate water waste. And one of the beautiful things about the building, architecturally, are the floor-to-ceiling windows we have that are all made of low-E glass to help us control the climate, as well.” (Low-e glass has a microscopically thin, transparent coating, much thinner than a human hair that reflects heat.)

Even so, Stone admits that with all of its amenities and vibrant city life, Columbia is still not universally recognized as a convention town. “And sometimes, we have difficulty in getting people to come in on site visits because Columbia just isn’t New Orleans or Las Vegas,” he says ruefully. “But what we hear most when we get people to see the facility, the hotels in the area, and the Vista restaurants and bars, we always get this comment: ‘We had no idea what you have, here.’ And if we can get them here, we can show them a unique, friendly, and specialized hospitality that they don’t expect to have in a convention center.”

Check out this handpicked feature on The Greater Columbus Convention Center.

WHO: The Columbia Metropolitan Convention Center

Spectra – Spectra is a venue management company serving over 750 clients throughout the United States and Canada. Its markets include: amphitheaters, arenas, convention and exhibition centers, cultural facilities, performing arts centers and theaters, and sports stadiums. Spectra Food Services & Hospitality serves over 250,000 events and an estimated 40 million guests per year in over 140 different venues. – www.spectraexperiences.com

SCAV – South Carolina AV is a prominent leader in the audiovisual industry for providing corporate events staging for meetings, seminars, special events, and tradeshows. SCAV provides event staging, technicians and support personnel, audio/visual equipment, and project management for its clients. It has been the preferred onsite vendor of the Columbia Convention Center for ten years. – www.scav.com 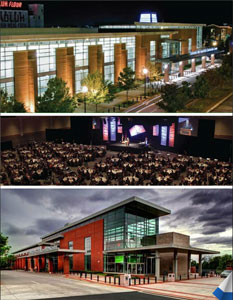