The Dolan Automotive Group – Another year of progress

Another year of progress

The Dolan Automotive Group, founded by Tom Dolan in 1982, is located in Reno, Nevada and serves customers in the Reno, Carson City, and Lake Tahoe areas. The Group is composed of Toyota, Lexus, Mazda, Kia, and Scion dealerships, each of which sells new and used cars and offers its customers both service and parts. Brady Dolan, Tom’s son became the General Manager of Dolan Toyota in 2012, and today is the Group’s GM; Tom’s older brother, Ryan, is the company’s CEO.

Last year, when Business View Magazine first spoke with Brady, he informed us that the Dolan Automotive Group was planning to build a brand new Lexus dealership. Recently, he updated us on its progress: “Last year was very busy building the new Lexus dealership,” he says. “We bought a piece of land and built a new facility from the ground up and we opened the building about four months ago. So, we are in a totally new, state-of-the art, 68,000 square foot building – about an $18 million project. We have our own coffee shop and we have a space for community events. A lot of non-profits have their galas and events there. It’s quite a beautiful room. The old building is now body shop; we plan on growing our body business.”

Even though the Great Recession hit Nevada particularly hard, Dolan reports that 2015 was a good year for his company. The sale of approximately 8,200 vehicles last year is a testament to the fact that the worst days of the downturn are behind them. “And sales have been good for the first quarter of this year, so we can’t complain,” he adds. “In fact, in our neck of the woods, the economy is going crazy, right now. Tesla just opened up a factory about ten miles from Reno.”

Elon Musk’s new Gigafactory, built to create the lithium-ion batteries that power his automobiles, is expected to add $100 billion in economic benefit to the region over the next two decades. In addition, other companies, such as Switch, a provider of internet data centers, Amazon, Apple, and Panasonic have all been busy, expanding their corporate reach in the vicinity of Reno. And more businesses mean more workers who will need cars. “More people are moving into this area and they’re saying that in the next five or six years, there’ll be an influx of 50,000 people,” Dolan says. “So car sales are great in this region.”

According to Dolan, other car dealerships are also responding to the area’s current and future growth – CarMax opened a location a year ago, and AutoNation recently purchased a Mercedes store. Meanwhile, the Dolan Automotive Group is mostly intent on growing its market share with the brands it already has. “Toyota has 28 percent of market share,” Dolan says, “and at Lexus, we have about 30 percent, which is tops in the country. But if something does come up to buy, we will definitely look at that.”

Other recent changes at the Dolan Automotive Group include the hiring of a new Service Director to oversee everybody in all of the parts and service departments of each dealership, and the opening of a full-service Allstate Insurance operation at the Toyota store. Car buyers can now buy, service, and insure their vehicles all in the same place.

Continual growth and progression has been the hallmark of the Dolan Automotive Group for the past 34 years. And as the area’s population continues to explode, the future of this family enterprise looks exceedingly bright, indeed.

Check out this handpicked feature on the Findlay Automotive Group – Family-Owned Since 1961.

WHAT: New and used car dealerships offering sales and service

WHERE: : Reno and Carson City, NV

American Tire Distributors – American Tire Distributors (ATD) first opened its doors in 1935. Through decades of acquisitions and steady growth, ATD has emerged as the nation’s premier tire distributor. The company serves approximately 70,000 customers in the U.S. and Canada. It has nearly 10 million square feet of inventory supported by a rapid delivery network, a field of dedicated sales specialists, an industry-leading technology platform, state-of-the-art logistics, and a variety of marketing support programs. ATD has 113 distributions centers across the U.S., 27 distribution centers across Canada, three U.S. mixing warehouses, and more than 1000 delivery vehicles. – www.atd-us.com

Finley Industries NAPA – With six locations, Finley NAPA provides its Reno, Nevada area customers with quality NAPA parts from an inventory of over 400,000 items and its ASE-Certified parts specialists are always ready to help with personalized service. Customers can order in person, by phone, or online. –www.finleynapa.com 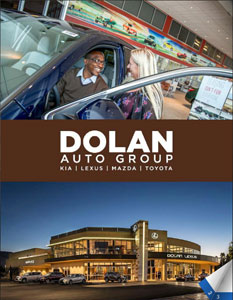