Marion, Iowa – A small community with some big things brewing

A small community with some big things brewing

Marion, Iowa is a city in Linn County, Iowa with a population of about 40,000. But, Tom Treharne, Marion’s Planning and Development Director says that, when asked, even local residents will say community is about two-thirds that size. That’s because the city, which was named after Francis Marion, a military officer of the Revolutionary War, has “that small-town, Iowa feel,” he says.

Nonetheless, this small town in east central Iowa has some big things brewing. One of the biggest projects going on, right now, is the Central Corridor Project, which is set to revitalize and expand the city’s downtown area, which is actually called “Uptown” by the locals. “There’s a highway that runs through town – Highway 151,” explains Treharne, “and over the years, it’s become a very congested roadway. Years ago we bought an old rail line that runs through town, one block south of 151. We’re transforming the rail line into an arterial that bypasses all of the older, built-out, highway commercial [structures], and developing that corridor into a mixed-use area. We’re expanding the Uptown district to about 16 blocks and we’ve bookended the project with two roundabouts. So, everything between the two roundabouts is going to be kind of an extension of that Uptown district.”

When complete, the Central Corridor Project will cost about $20 million. The City is investing in public improvements such as pavement, sewers, sidewalks, street lights, trails, and streetscaping, hoping to solidify Marion’s place as a regional hub for business, urban-living, and entertainment. “Most of it is going to be funded by bonding and a local option sales tax,” Treharne says. “And we are offering incentives for redevelopment in the area. We’ve been buying quite a bit of property, and as we buy the property, we make that part of an incentive package to draw in new investment.”

Attracting business investment is important to the city, because, by some, Marion, Iowa is considered merely a bedroom community of nearby Cedar Rapids, especially since it doesn’t yet have a large commercial tax base. “That’s what we’re trying to grow with our Corridor Project,” he says. Another roadway project on the north side of town is called Tower Terrace Road. “That’s where we see our next commercial corridor taking hold,” he adds. “We’re using a lot of regional transportation dollars to fund that project. We’ve been working with Cedar Rapids and other metropolitan communities to develop it.”

On the east end of town, the redevelopment of a small airport is underway. “It was a private airport,” Treharne says, “and when the owners decided to sell, we purchased it through a public/private partnership. And because the City now owns the fixed-base operations, we are eligible for state funding assistance. The Cedar Rapids airport has a great deal of commercial activity and a lot of people have their private planes there, but it’s not conducive to an easy-in, easy-out. If we rebuild our airport, with between a four- and five-thousand foot runway, we’ll be able to have very easy access for smaller general aviation planes. The idea would be that we could become more of the business airport for private companies. I think there’s a big market for that.” In addition, acquisition of the airport also opened the door for the development of 66 acres of commercial ground, east of the site.

A few miles north, Prospect Meadows Ball Fields are coming to fruition. The proposed 17-field baseball and softball complex will be a destination for local league play and weekend tournaments, drawing teams from across the Midwest. The 128-acre, $14 million complex will also feature a “Miracle Field,” specially built for people with disabilities. It is estimated that the complex could generate up to $25 million in direct spending in the area, each year, filling 80,000 hotel room nights due to extended stays, while creating 150 full- and part-time jobs. “It’s a pretty big deal for the city,” Treharne says. “We only have two viable hotels, so if this project comes in, it’s going to be a huge economic development driver. We have two hotels looking at us, right now. The project is about 80 percent funded, and the hope is that they’ll be breaking ground, next spring.”

For a community with active living in its DNA, Marion is making great strides in developing an extensive trail system. Its Master Trails Plan was adopted in 2014, and provides an outline for future trails and on-street bikeways with an emphasis on connectivity to community destinations and enhancement of the regional trail network. “We have a metropolitan planning organization that is made up of representatives of all the local communities. All federal transportation dollars are directed to this entity and they have a long-range plan for how the funds will be spent,” Treharne explains. “The communities came together and decided to put 80 percent of the funding to trail development. We had just finished our Master Trails Plan in Marion, so we were perfectly-positioned to apply for these funds. Ultimately, between further developing the trails in our community and making important connections to the trails in Cedar Rapids, we have $10 million worth of trails planned over the next five to six years, which is pretty impressive for a small community.”

Even as Marion, Iowa continues to grow, its charm and small-town atmosphere, and its forward-thinking ambitions continue to set the community apart. “We’re growing five to six hundred people a year, right now. So, we are one of the faster growing communities in the state,” he says. “We pride ourselves on being the best place to raise a family and grow a business. The family-friendly, community-oriented atmosphere here is hard to find elsewhere.”

Check out this handpicked feature on Enfield, Connecticut. 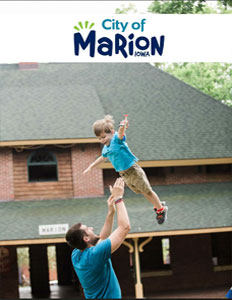