The term “grease monkey” is said to have originated in Great Britain during the Industrial Revolution. Prior to the widespread use of electric motors small enough to be connected to each piece of machinery on a factory floor, power was distributed from a centralized steam engine to the individual work stations through the use of line shafts and their many component parts – gears, belts, axles, pulleys, and bearings. The line shaft ran along the building’s ceiling and all of its elements had to be continually lubricated. The small boys whose job it was to crawl amid the tight spaces in the ceilings to do this dirty job seemed to resemble a bunch of grease-covered monkeys to the workers toiling below them.

Years later, the term began being applied to mechanics, and more specifically to car mechanics, who like their factory forebears, were oftentimes stained with the various greases and oils needed to keep the component parts of an automobile running smoothly.

Since Business View Magazine first spoke with Senior Vice President for Operations and Business Development, Ralph Yarusso, the company has had a banner year, expanding both domestically and internationally. There are now 308 Grease Monkey outlets in 33 states, with expansion into Canada anticipated soon. “We’ve signed master franchises in Colombia, South America and Saudi Arabia,” Yarusso says, “and we also added another new store in Mexico. We’ve added eight more company-owned centers and 13 more franchise centers. We’ve got nine centers under construction that should be completed by the end of this year. We also had unprecedented in-store sales growth, customer growth, and ticket average growth.” In addition, Yarusso says that the company has added an in-field technical support team to do more hands-on, in-field training, and revamped its online university which offers its franchisees approximately 200 courses in car and customer care.

Lori Schneider is Grease Monkey’s Franchise Development Specialist. She talks about Grease Monkey’s new Pit Crew Guarantee®: “We’re taking the certified pit crew up one more level,” she explains. “Our promise to our customer is once your vehicle rolls into the bay, we will have it serviced in a specified amount of time that is determined by the franchisee – normally anywhere between 15 and 20 minutes. We have a clock on a big-screen TV in the lobby and bay areas and it starts counting down once the vehicle is in the bay and until it is rolled out. And if we go over that promised, specified period of time, we will refund a dollar for each minute that we’re over. So the customer actually becomes part of the service and it keeps the employees involved and on top of things. We’ve had a lot of great response and seen a lot of online reviews with people saying that they like this, it’s interesting, it’s something different. Sometimes the customer is even rooting against us so they can get that two or three dollar discount,” she adds with a laugh.

Yarusso says they’re working to get the program into every single unit. “We’re at 70 percent,” he reports. “Our goal is to be at 90 percent by June 30th, 95 percent by September 30th, and 100 percent of our system will be compliant with the Pit Crew Guarantee® by December 31st.”

Why is Grease Monkey the only car care company to have instituted this type of guarantee? “The bottom line is that we respect the customer’s time,” says Yarusso. “And we know three things that the customer wants because we surveyed over 9,000 of them. They want it done right – which is why we came up with our certification program; they want trained technicians; and they want it done fast. So, we’ve put our stake in the ground and we back it up. If you come in, we make a commitment to you. And if we don’t fulfill our obligation, we give you back a buck for every minute we’re over.”

Yarusso adds that the company beta-tested the concept over the course of two years. “We had hundreds of exit interviews with customers, so we know what we’re doing,” he maintains. “No one else is doing it; we’re the first to market with it. We believe in it wholeheartedly – it’s the way we go about our business.”

And so, this past year, this successful car care company has once again proved that constantly growing, constantly innovating, and constantly determined to meet its customers’ needs is, indeed, the Grease Monkey way. Or in other words: “Less hassle, more hustle!”

Check out this handpicked feature on Chomarat, NA – Celebrating 120 years of innovation.

WHAT: The nation’s largest independent franchiser of automotive care centers

WHERE: : Headquarters in Greenwood Village, Colorado

Chevron – Chevron is pleased to present a complete line of quality brands, products, programs, and local services in a National Account Program created expressly for Grease Monkey franchisees. Call Larry Russell at 206.890.1438 to inquire about all the benefits, including nationally negotiated pricing across our PCMO, HDMO, and fuel additive brand line. – www.chevron.com 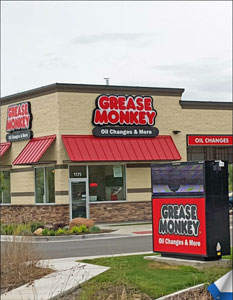