Middleton is a city in Dane County, Wisconsin, located about six miles northwest of the state capital in Madison, on the banks of Lake Mendota. Known as The Good Neighbor City, Middleton has a very strong and diverse economy and is a source of many jobs for its residents and those of the surrounding communities. “In fact,” says City Administrator, Mike Davis, “though it’s unusual for a so-called suburban community, we are a net exporter of jobs. About 10,000 more people come here to work every day than are leaving to work elsewhere.” 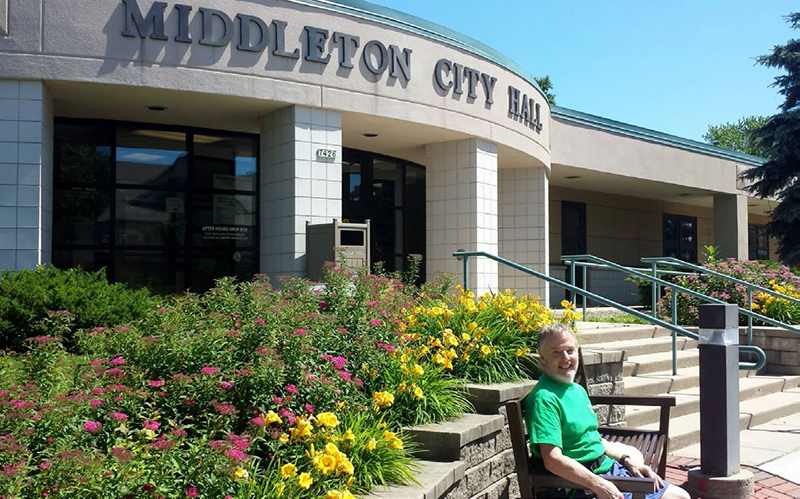 With only 21,000 citizens, Middleton is home to over 2,000 companies, and the headquarters of many of Dane County’s largest employers. In addition to many types of service industries and major manufacturers, the Middleton business community also features a strong cluster of high-tech businesses, including those specializing in health and wellness, pharmaceuticals, biotech, agribusiness, and research and development.

“We have the corporate headquarters for American Girl, which is owned by Mattel,” Davis reports. “There’s also Electronic Theater Controls, which is a privately-held company and the largest electronic theater operation in the world. They’ve got 11 offices around the world, and over 900 employees, right here. They provide theater controls for everybody from Broadway to Disney to Hollywood. We have Fiskars, which is well known for its scissors, but they have many other products, and they have their American headquarters in Middleton. We have Gilson Medical Instruments, which was the original manufacturer of pipettes for scientific research in the United States, and they are still number two in the world. Mead & Hunt Engineering is a leading aviation engineering company and they’re headquartered in Middleton. Natus Neurology has its North American headquarters here, specializing in neurological products. We also have Pharmaceutical Product Development (PPD). They’re a major company and our largest employer with close to 1,700 employees. They do research and development for pharmaceutical companies around the world. Spectrum Brands is also a Fortune 500 Company that makes Rayovac batteries, for example. Then the University of Wisconsin Health is also headquartered in Middleton and they’re one of our largest employers, too. So, we have a great compilation of businesses with a variety of benefits to the community.”

One of those community benefits is a comparatively low tax rate for Middleton residents. “Most communities have in the neighborhood of 75-80 percent residential tax base,” Davis notes. “Our residential is about 55 percent and our manufacturing and commercial is about 40-45 percent. It’s about $4 billion in value now; in 1998, it was $1 billion, so we have quadrupled the tax base in that time.”

Davis says that there are several reasons why so many companies love setting up shop in Middleton. First of all, there’s the city’s proximity to Madison, as well as the University of Wisconsin, which is just five miles down the road. “Also, we have offered a very aggressive Tax Increment Finance product for a very long time and we have two major tax increment districts that are targeted to business assistance and improvements of the infrastructure within those districts.”

The city’s Tax Incremental Financing District #3 was created in 1993. In the original 1993 TIF District 3 Project Plan, the base value of the TIF District was listed as $34.1 million. At the time, projected expenses were $15.8 million, with projected new development of $44.9 million. To date, the City has spent approximately $65 million, and created over $624 million in new value. The City created Tax Incremental Financing District #5 in 2009. In that Project Plan, the estimate for projected expenses for the life of TID #5 (through the year 2031) was listed at $104 million. The estimated value to be created within the TID #5 is $678 million, on a base value of $89 million.

“You build up the property values, and then, when you’re successful, you amend the TIF district and take the area that has been built up out of it and the underlying tax jurisdictions benefit,” Davis explains. “So, the districts, combined, have generated nearly a billion of new tax value and about half of that has been returned, from the success of the TIFs, back to the underlying taxing jurisdictions, including the city.”

Other reasons why businesses and people choose Middleton include: one of Wisconsin’s top public schools systems, a superior collection of public amenities, the City’s devotion to maintaining its natural environment, and a municipal commitment to sustainability and environmental protection. For example, Middleton is home to a nationally recognized library, and a nationally accredited police department and senior center, as well as a highly regarded publicly-owned and run golf course, and 22 public parks.

In addition, Middleton’s conservancy lands system provides over 835 acres of open space, which represents approximately 14 percent of land within the City. A city-wide, comprehensive system of recreational trails provides about 22 miles worth of bike and pedestrian trails with convenient access to park sites and other regional recreational systems. Over the past decade, substantial investments have been made in the development of the off-road trail system, whose backbone is a multi-use trail that runs along Pheasant Branch Creek and provides an east-west connection through the heart of the community.

Downtown, the City’s Middleton Center, a $55-million retail and residential development project, is currently in its third phase of construction. The Center comprises 35,000 sq. ft. of high-image retail space and 50,000 sq. ft. of Class A office space, in addition to a variety of luxury apartments. “It has redeveloped an area that had been redeveloped back in the 1980s,” says Davis. “So, it’s redeveloped for a second iteration while maintaining the historic buildings in our downtown center, which is not always the case for a smaller city. Sometimes historic buildings are sacrificed for newer buildings. But we’ve been able to keep our older buildings that date from 1900. The Middleton Center is the big project, right now, and in the future, we have plans to develop what we’re calling Stone Horse Green, which will be a plaza adjacent to Middleton Center.”

The name Stone Horse Green reflects the site’s history as the original livery stable of Middleton, dating back to 1876. The design for the site includes a theater to allow for scheduled and pop-up performances of all kinds, restrooms, a slight grade separation and retaining wall to provide additional seating while keeping small children safely within the lawn, and a circular pathway to provide accessibility for wheelchairs, strollers, and those with mobility challenges. The design also includes plenty of benches and bistro tables to provide spaces to socialize and picnic. Solar panels will power about half of the lighting used on site. There will be two interactive sculptures by Actual Size Artworks: the Barn Lights sculpture will incorporate artistic lighting that can activate and shine down onto pedestals where kids of all ages can play, and the Herd of Boulders sculpture will be heated and will honor the history of the site. The City has contributed $500,000 to the project, but still needs to raise an additional $1,000,000 to begin construction. It hopes to break ground on Stone Horse Green in 2021.

“We have one other pending project that we’re working to finalize, now, and that is a cross-country ski development on the west side of Middleton,” Davis adds. “When the glaciers formed their boundaries in the state some 10-12,000 years ago, it left a nice hilly area in southwestern Wisconsin and Middleton is the gateway to that area, known as the ‘driftless region.’ The glaciers pushed the geology into limestone hills throughout the southwest portion of the state and we’re on the eastern boundary of that area. Our golf course, called Pleasant View Golf Course, sits atop a hill that overlooks the Madison area and Lake Mendota. We’re looking to improve the area north and west of there for cross-country ski trails for the winter months and bike trails for the non-winter months. And a private land donor is partnering with the Central Cross Country Skiing Association to build a U.S. Olympic winter sports training facility just west of the city and just north of the golf course.”

In the realm of sustainability, Davis mentions a collaborative venture with the local utility company, Madison Gas & Electric, at the city’s Municipal Airport: “We have space that is otherwise unused there and we worked with MG&E to provide an area for a huge solar array. It’s a 5-megawatt array with 17,000 panels on 21 acres that can power about 1,200 households in the community. So, that’s been a huge project. It’s going to offset about 356 million pounds of carbon dioxide over the next 25 years – that’s equal to about 1,850 passenger vehicles per year.”

In addition, in 2018, the Middleton Common Council unanimously passed Resolution 2018-32, as recommended by the City’s Sustainability Committee, to Address Global Warming Through Clean Energy. The Resolution establishes goals to meet 25 percent of all City operations’ electricity needs with renewable energy by 2025, 80 percent by 2030, and 100 percent by 2035. “So, with three solar installations that we’re putting on our own buildings, and the city’s share of solar from the airport, we’re going to meet about 50 percent of that goal, already, in 2020-21,” Davis claims. “The city and the school district both get the benefit of energy generation for their long-term needs.”

Why live, work, and play in Middleton, Wisconsin? According to Davis, the answer is simple. “In addition to our conscientious and thrifty people, the combination of great schools, a great location, a great economy, great natural and built environments, and a strong sustainability initiative is what sets us apart.”

WHERE: In Dane County, six miles northwest of Madison