Clean energy for the Empire State

The roots of NYSERDA go back to the 1960s when a separate authority, the New York State Atomic and Space Development Authority, was formed to look at how New York’s economy could benefit from focused activity in the burgeoning nuclear and space industries, as well as possible technology research opportunities and market opportunities for NY in advancing these industries.

According to John Williams, NYSERDA’s Vice President of Policy and Regulatory Affairs, “In the early 1970s, the nation was experiencing oil crises. Both the New York and national economies were quite heavily dependent on petroleum for a number of activities, including electric power generation. Oil was the primary source for heating fuel in New York State, as well as, obviously, for transportation. As a result of those oil crises, the state decided we needed to take better account of what alternatives might be available from a technology perspective, but also how to think about introducing those technologies into the economy. That’s when the Atomic and Space authority was repurposed and NYSERDA was created.”

The agency, at the time, was very much focused on a research and development mission, taking account of the technology alternatives, still in rather nascent stages that would benefit from some focus. New York does not have an abundance of indigenous resources; its energy fuels have been imported over the vast majority of time: oil; coal (a larger fuel source earlier, especially in electrical production); and natural gas (a lesser fuel back in the 1970s), of which New York produced a very minute amount.

Williams notes, “At that time, there was a focus on energy efficiency technologies. How could we find ways to make the equipment we depended on perform better and provide higher levels of work output per energy input required? But what might be some alternate resources from nascent energy supply technologies? That was the birth of looking at wind and solar technologies and bringing that into the New York State system.”

Taking into account that New York’s economy was heavily dependent on importing energy resources, the authority’s life, from the beginning, focused on looking for alternatives that would benefit the New York State energy equation but would also be a catalyst for the markets that could be built in the state, so that in-state industries and in-state consumers would find an economic opportunity as well as positive environmental outcomes.

Currently, there are about 330-350 employees at NYSERDA, with headquarters in Albany, and a presence in New York City, as well as Buffalo. The staff is made up of professionals: engineers, scientists, lawyers, MBAs, accountants – all contributing to the ways the programs are either designed or implemented and ensuring that they are performing the way they need to be. 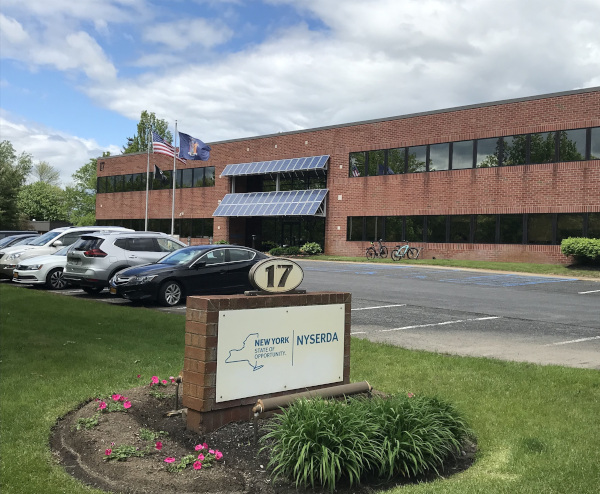 NYSERDA’s primary source of funding comes from the New York State Public Service Commission, which has oversight over utility operations and pricing and ensures that utilities are providing safe, adequate service at just, reasonable rates. The Commission also looks at Governor Andrew M. Cuomo’s policy directives and the most cost-effective means of realizing clean energy policy goals, as well as directing collections to be utilized specifically to support clean energy activities in the clean energy fund. “The Commission also has energy efficiency and other clean energy activities identified and implemented by each of the state’s utilities, so NYSERDA and the utilities work closely to make sure we are all working in the right ways with the various market actors,” Williams confirms.

“Our program portfolio is divided into market development, which is building markets for energy efficiency services, as well as developing  renewable energy like wind farms and offshore wind initiatives,” he continues. “The portfolio maintains robust technology research and development activity which is looking at next-generation technologies and how to introduce them to the market when we have technologies working, through early demonstration projects.”

As climate change has become an ever-more-present reality, those environmental drivers have become ever more present in the policies New York has advanced, and those policies have influenced the focus of NYSERDA-based activities. “From technology R&D, to building the scale of clean energy in markets, we have expanded the mission to include technologies for energy services to advance our economic and environmental needs in New York, particularly on climate change imperatives,” adds Williams. “Our mission is to advance innovative energy solutions in ways that improve New York’s economy and environment. Our vision is to serve as a catalyst – advancing energy innovation, technology, and investment; transforming New York’s economy; and empowering people to choose clean and efficient energy as part of their everyday lives.”

Climate change and clean energy remain the strong focus of the way NYSERDA engages with the market. New York’s 2015 state energy plan established emission reduction goals in the energy sector. Renewable energy and energy efficiency goals, established the market signal that NYSERDA and other state agencies would utilize in creating programs and analyses to understand barriers to adoption for clean energy in the state. “Then we can target activities to address those barriers, as sometimes technology barriers exist as relative higher costs to other market choices, Williams notes. “If it’s a cost barrier, NYSERDA will create a program opportunity with the customer realizing a lower cost for that particular technology, such as a direct grant program aimed at higher uptake and customer adoption of clean energy technology.”

There might be other costs the customer realizes not just on the technology, such as permitting costs and permit delays; if some don’t understand what the technology’s designed to do, some education is needed there. NYSERDA looks at the entire supply chain – manufacturers, wholesalers, retailers. As customers want efficient and clean technology options readily available, NYSERDA works with the supply chain so they see the financial benefit in201 offering clean energy alternatives.

The NY-Sun Program, Governor Cuomo’s $1 billion initiative to scale up solar and move the State closer to having a sustainable, self-sufficient solar industry, is designed at getting at both the hard cost and the soft cost of solar energy. When the consumer has made a decision to install solar, how can it be made as easy and inexpensive as possible for that solar project to be realized? The declining block program is an incentive that identifies that, as more solar is coming into the economy, it’s assumed those technology costs should be declining over time, so the incentive declines as levels of penetration of that technology into the system are estimated.  NY-Sun also has attended to education, working with building inspectors at the permitting level, so they have a better sense of the technology they’re dealing with. Therefore, when they see systems come into their neighborhoods, they’re not feeling as if they don’t understand what the system is, or don’t know what all these components are, or don’t really know how to guarantee that these systems are being installed safely. “We have developed a solar guidebook that gives step-by-step instructions and understanding to the people that are going to be looking at these systems and giving inspectors the information they need that makes that process run much easier and quicker, thereby reducing overall cost of the project as well,” says Williams. 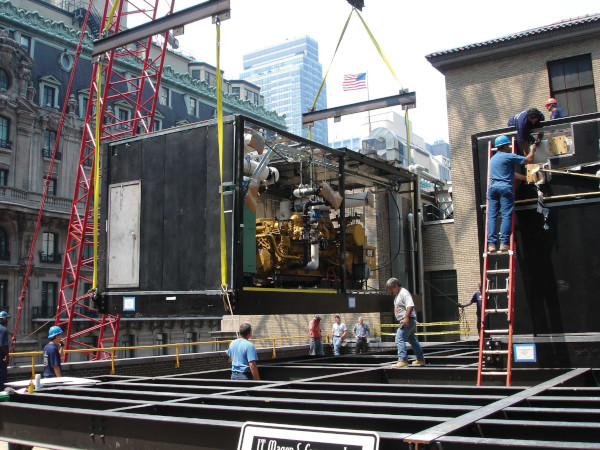 Northern Power Systems’ 1.6 MW on-site, combined heat and power (CHP) system at 717 5th Avenue in New York City. The first system of its kind to be interconnected to the critical midtown network grid, it will handle 60% of the 450,000-square-foot building’s electric usage and 65% of its cooling and heating needs.

Another example of developing markets through policy is energy storage and battery technologies. NYSERDA has, for a number of years, looked at in-state battery technology R&D and systems. But to support technology in New York that is now ready for primetime, NYSERDA is organizing around program activity that will be looking at building a battery technology market to scale in New York over the short term. “We have policy directing us to do that: 3,000 megawatts of energy storage by 2030. We’re starting at a relatively low level but we’re designing programs to quickly ramp up and attract customers to utilize those technologies,” Williams claims.

2030 is a benchmark year to achieve 40 percent greenhouse gas emissions reductions in New York’s energy system. “This acts across the whole economy, but for NYSERDA we think about it with energy, so we have to translate that in terms of how much contribution do we need from solar energy, wind energy (whether it’s on-shore wind or building a new off-shore wind industry), energy efficiency, energy storage. This is going to be a system that operates very differently, as we’re pulling these renewable and intermittent resources into the system,” according to Williams.

Guided by Governor Cuomo’s Green New Deal, a nation-leading clean energy and jobs agenda to put New York on a path to a carbon-neutral economy, NYSERDA is looking at what that change of resource mix needs to look like and the change in the way that the electricity system needs to function over this short period of time, and how to support the various technologies to get to that end state. It’s necessary to think about emissions reductions in other sectors of the economy besides electricity production. Transportation emissions suggest electrifying that transportation fuel load and moving that onto an ever-cleaner electricity grid. The same goes for on-site fuel uses; there are still many homes and buildings that heat space and water with fuel, whether natural gas, oil, or propane. It’s also essential to look at electrifying that load with heat pump technology, whether air source or geothermal, which will also result in reduced greenhouse gas emissions from those sectors.

To that end, Williams says, “We’re looking at building 9,000 megawatts of offshore wind power by 2035. It’s an industry still very nascent in this country, but we’re hoping to take the learnings of the European experience. By planning 9,000 megawatts, we’re seeing a very active market response, and developers are very interested in coming to New York to make those investments and help New York State meet those goals. With solar energy, we’re looking at 6,000 megawatts of solar by 2025. That is an exponential increase in how much solar we have today. Our current goal is 3,000 megawatts by 2023. We had to double that to make sure solar is on a track to meet the policy goals; the same with doubling land-based wind. The amount of energy efficiency we’re looking at is roughly equivalent to about 20 percent of the building electric demands.”

The professionals at NYSERDA are very keen on seeing that New York’s economic opportunities and environmental requirements are all met and satisfied. “Whether it’s businesses becoming more energy-efficient or consumers looking for renewable and clean energy outcomes, we’re very much looking to ensure that all New Yorkers can realize the benefits of the clean energy strategies that we have in place,” states Williams. “Aside from looking at only the technologies and the market, we engage local communities and individuals so they have a good understanding of the value clean energy provides, and how NYSERDA’s clean energy communities program can best help the leadership within the community understand why clean energy is so important, and how to go about realizing those clean energy outcomes.”

What: A government agency mandated to promote energy efficiency and the use of renewable energy sources

ShowHauler Trucks Inc. – The Leader in...