Putting the pieces together

Business View Magazine interviews representatives from Douglas, Arizona, as part of our focus on best practices of American towns and cities.

Douglas is a city in Cochise County, Arizona, on the U.S.-Mexico border, some 120 miles southeast of Tucson. It is surrounded by the Mule Mountains to the west and the Chiricahua National Monument to the east. The town was originally incorporated in 1905 to smelt the ore from the copper mine in nearby Bisbee, and named after mining pioneer, James Douglas. The smelter closed in 1987 and its 160 employees were furloughed.

Today, Douglas has a population of approximately 16,000 and serves as a Port of Entry for international trade and commerce. Sharing the border with Agua Prieta, Sonora, whose population approaches 180,000, the two cities share an interdependent economy and culture. In fact, in 2019, 27,000 trucks, 1.53 million cars, and 898,000 pedestrians crossed northbound from Mexico, totaling 3.63 million people. During the same year, there was a total value of imports and exports of $1.9 billion. Silver, insulated cable and wire, copper wire, live cattle, and vehicle parts comprised the top five commodity imports. The top exports were petroleum and other hydrocarbon products, cotton and yarn, parts for electrical supplies, rubber tires, and scrap metals. 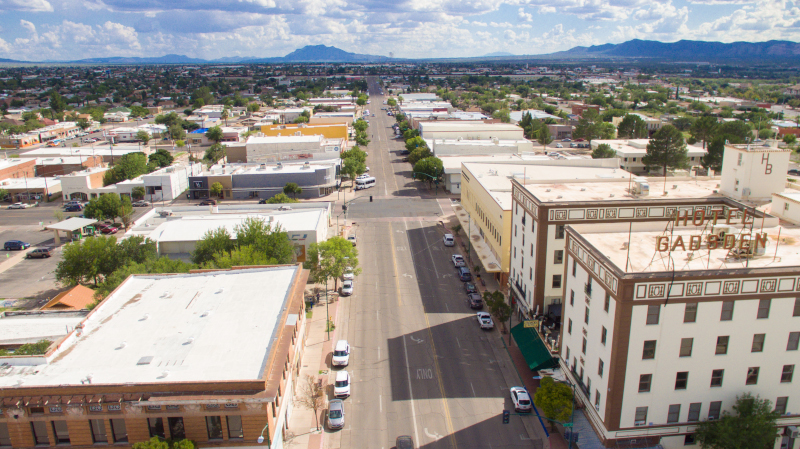 Douglas takes pride in its deep family roots and people, its affordable cost of living, and its year-round great weather with star-filled nights and clear atmospheric conditions that draw amateur and professional photographers from around the world. Its residents and visitors enjoy amazing vistas across the region, with trails, preserves, and open space for walking, hiking, and biking. Its historic downtown features the famed Gadsden Hotel, which opened in 1907, and the Grand Theatre, which opened in 1919, both of which are listed on the National Register of Historic Places.

Douglas is actively seeking to revitalize its downtown, which is targeted for streetscape completion in 2021. “We are investing, between this fiscal year and the upcoming one, about a quarter of a million dollars into a downtown revitalization street plan,” explains City Manager, Jerene Watson. “That shows our businesses and other outside investors that we’re serious about moving the city forward and reviving some of the economic vitality that it’s had in the recent past. We had been meeting with some of the business owners that are out-of-state, who own some of the main properties along G Avenue, and so we will be revisiting with them, knowing that COVID put everything on a three to five month hold, for now. But we’re hoping that some of the plans that they had talked about in the early part of this year will be resumed and that includes some entertainment venues, some restaurants, and small business – retail/commercial ideas for our downtown.”

Watson adds that another key to downtown revitalization would be more hotel rooms, as the city is working to become a vibrant tourist destination that features historic architecture, award-winning cuisine, and a thriving bi-national arts community. “We had a hotel study done, and it shows that we could easily support one more,” she notes. “And if they do a model where they have some extended stay, we’re likely to end up with two. One of the hotels has actually purchased property here in Douglas, and it’s a major brand, so people who are used to brands and getting points would be able to do that depending on which of the chains ends up here.” Another key is more downtown housing. “We have a short supply of it, right now,” she admits. “Retail follows rooftops, and we understand that. This wouldn’t necessarily be new rooftops; it would probably be rehabbed buildings.”

According to Mayor Donald Huish, Douglas definitely wants to convince more workers to become permanent residents of the city. “This town is such a beautiful place to live,” he states. “Of course I’m biased because I was born and raised here, but it is a community where your kids can still ride their bikes over to their grandparents’ house without any fear. We intend to keep it that way, but we are also after a steady growth. A lot of the people who work in our community live elsewhere – primarily the people that work for the federal government in our Port of Entry and also our Border Patrol. So, multi-use housing in the downtown area is primarily geared to try to get them to stay here. When they arrive here, many times they want to seek a little bit faster lifestyle and, therefore, they’ll end up anywhere from an hour to an hour-and-a-half away and commute to work. Once we capture that group, that will allow further investment as they’ll see our average income increase and we’ll make ourselves much more marketable to the world of restaurants and night life and entertainment venues that we really can’t support one hundred percent, right now.”

One major new development scheme that should help attract more skilled workers is Douglas’ new Port of Entry project. The city has been working with many stakeholder partners, including the Douglas Regional Economic Development Corporation, the Douglas International Port Authority, the Douglas Industrial Development Authority, and Cochise County to improve the border crossing experience for goods and people. Over the past two years, efforts have been focused on a Two Port Solution that will relocate commercial traffic to a new state-of-the-art facility, while the existing port will be dedicated to non-commercial operations, such as pedestrian, car, and bus traffic.

Watson reports that the new commercial port has already been approved by the U.S. Congress and Douglas is hoping to get funding approved, this session, for the $170.5 million project that the General Services Administration (GSA) will build about four miles outside of the current city limits. “Our city council is getting ready to annex the area that will incorporate that land,” she says. “We own the land that the port will go into, but it sits right now on a county island until we get the annexation done. Then development will occur all along Highway 80, once we get the water and wastewater infrastructure in there. We know that developers and investors are ready to build light industrial warehousing and things that will serve the new Port of Entry.”

In addition, Douglas is home to a few federal Opportunity Zones, and Watson says that interest is high, although the coronavirus pandemic has slowed down the momentum, somewhat. “Because of COVID, what’s going on is still the same, but not with the same furor that it was probably back in January and February,” she recounts. “We still have our Opportunity Zones here, both in the city and abutting the city and the county next to us. We are working with a broker who has a couple of folks who are coming into land that’s supposed to close in escrow this month. One of them is an Arizona company and the other is a national truck stop group that’s working with the county to build in the Opportunity Zone.” 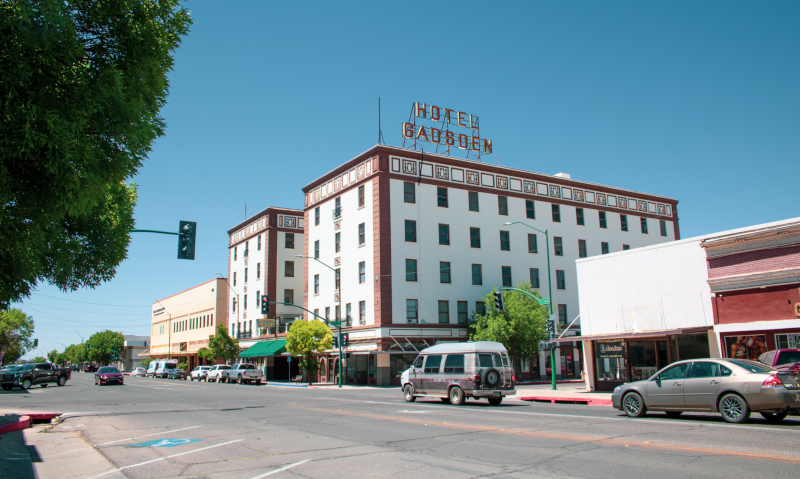 Regarding potential, incoming developers, Watson says that they generally come from bigger cities and are familiar with the types of things that often slow down development: impact fees, permits, building codes, etc. “So we offer them our concierge service,” she explains. “We’re very nimble; we get kudos all the time for turning around plans almost immediately; sometimes the same day. And we have some incentives that are built in to who we are – we have some of the lowest cost in water rates in the State of Arizona; we have only two impact fees, while most cities have five to seven. So, we promote those built-in benefits to do business here in Douglas.”

“One of the things that we also focus on, as well, is the fact that, although from the U.S. perspective, Douglas is a small city, we are right at the border and the city on the other side of the border is a much larger city than ours – 150-200,000 people,” says Deputy City Manager and Director of Economic Development, Dawn Prince. “So, being able to tap into that bi-national market and understanding that individuals from Mexico do come to the U.S. to purchase our goods and services means they’re a huge part of our city’s revenues. So, they really need us to give them that information about Mexican citizens that come to the U.S. to shop – where the people shop, how they shop, how much money they spend. We have a marketing letter that we provide investors that touches on regional demographics; when any investor comes in, whether they sit with us or they call us, we always make sure they get that.”

At present, Huish admits that Douglas lacks a mature, skilled workforce, but  to make sure that new businesses have that skilled workforce at hand, the city has developed partnerships with Arizona@Work within the Arizona Commerce Authority, the Arizona Workforce Connection, and Cochise Community College. “They are ready, willing, and able to help train some of those people and get them ready for any type of industry that would want to come here,” he says. “We also have a presence of the University of Arizona, here in town, so all those partners are with us to assist any type of business that would want to come to town that needs some specific training to accomplish their goals.”

“And we would love to attract more of the border technology firms,” Watson adds, “because we have the right atmospheric conditions, and we have the open, pristine, undeveloped land all around our area. We’re open for business; we have a lot to offer; we have great prices on land; we’re easy to do development agreements with. Our door is open and we hope that people would come here, and do good things, and bring a good workforce. We’re working to get more amenities here for people. We’ve got all of that here in little pieces, but we’d like to expand it and create a broader community for the new ones to come in.”

WHERE: Cochise County, Arizona, on the U.S.-Mexico border

The University of Arizona, Douglas – douglas.arizona.edu