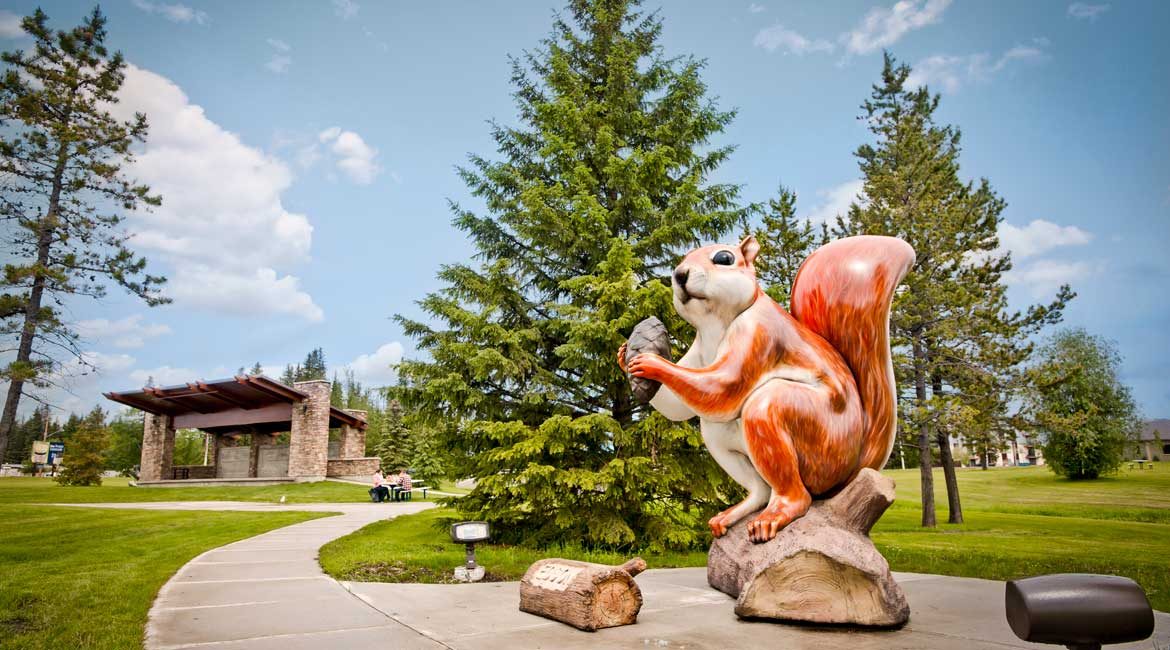 Edson is a town in west-central Alberta, about 120 miles due west of Edmonton, and about an hour and a half’s drive east of the Canadian Rockies, which according to Mike Derricott, the town’s Chief Administrative Officer, has “some of the greatest scenery in the entire world.” The town was originally named Heatherwood, but the name was changed around 1911 in honor of Edson Joseph Chamberlin, vice-president of the Grand Trunk Pacific Railway. That same year, the community was incorporated as a village, then a town in 1912.

The main industries that drive Edson’s economy are resource-based – forestry products, coal, oil, and natural gas. “We’re very fortunate to have some diversity in that regard,” says Derricott. “We have an OSB (Oriented Strand Board) lumber mill, just outside of town. We also have coal mines in close proximity that employ some of our people. Then there’s the oil and gas sector; natural gas exploration is a significant part of the economy of the region. Edson also produces a sizable support economy. We have the doctors and dentists and schools and all of those pieces that support the resource-based employment, here. Another significant impact in our community is the Yellowhead Highway – Highway 16 – which is, for us, one of the key freeways that goes east to west in Canada. It travels from Edmonton to Jasper National Park and so we see a significant amount of tourism-related traffic, particularly in the summer months. And so, a lot of service-based industry – fuel and food – is a part of that as well.”

Today, Edson’s population hovers around 8,500 people. “We also deal with the ebbs and flows of the resource sector,” says Derricott. “There’s a significant shadow population which is the transient workers that come to town, fill up our hotels, fill up the rental properties, but wouldn’t consider themselves permanent residents of our community. And that can be anywhere from one to several thousand workers, depending on how busy the oil and gas sector is. Right now, we’re experiencing a moderate level of that –maybe a thousand, but if things ramp up, it can become a significant addition of people to the community.”

While Edson has existed for quite some time in an economic boom region, with the oil and gas sector, in particular, pushing the economy forward, Derricott admits that over the last 18 months, or so, the decline in the sector has caused the town to re-evaluate some of its perspectives. “Business came easy during the boom times,” he says. “We really just collected the apples as they fell off the tree. We may have to become a little bit more strategic and proactive in fostering and strengthening the attractiveness of Edson as a place to live and do business, because while I certainly hope, and the indications are, that the oil and gas sector will strengthen, I think it’s unlikely we’ll experience the same kind of boom that we did previously.”

However, from his position as the town’s Chief Administrative Officer, Derricott stresses that one of the key responsibilities for the municipality is to still provide the core infrastructure that supports both the residents and businesses in the area. “And we have some unique challenges in that regard,” he says. “Edson is one of the older communities in Alberta, and along with some great history and heritage come some really old water and sewer lines that need lots of attention, and, obviously, are costly to replace. Some communities our size, in this region, are only dealing with 50 years of infrastructure degradation; we have water and sewer lines that were installed in the 1930s that we’re rehabilitating and replacing. We’re evaluating the condition and the financial implications of doing that, which is an ongoing process for us that will continue into the foreseeable future.

“One significant change to our core infrastructure is we are about a third of the way through the construction of a wastewater treatment plant. This was a $17 million infrastructure piece that came with some of the changing regulations in terms of environmental standards here in the province for treated water. We’ve gone from a passive, aerated lagoon treatment facility to a more active facility, which can treat for phosphorous and nitrogen and some of the other chemical components, as well, and even has the ability to be upgraded in the future to include UV treatment, which is even more significant. It allows us to be much more confident that the end product that we’re returning to the water system is cleaner and safer and healthier for the ecosystem. The $17 million price tag is significant and is a big investment for the community, but is one that is inevitable. It’s about 35 percent funded by the provincial government and the remainder will come from municipal funding, and frankly, we didn’t have a lot of choice. But all those pieces are part of our strategic goal to provide the foundation that the business community and residents can then build some of their pieces onto. And we know if that foundation isn’t in good shape that we won’t be successful with some of the higher level objectives of economic development in our community.”

Should Edson ever have the need, or desire, to extend its boundaries sometime in the future, Derricott says that the town is planning ahead. “We have a project that is shovel-ready,” he states. “We call it the West End Sewer Line. It opens up half a dozen quarter sections of land on the west end of the community to be serviced with water and sewer. It also runs up against the border of our partners in Yellowhead County. We want to be proactive in thinking about if those border areas are going to take advantage of our services, we want to make sure we work with our partners to build a cohesive development plan so that at some future date, if we do annex them, it matches up as well as possible with our development here in the town and we have a willing partner in Yellowhead County that’s working with us to that end.”

Meanwhile, Derricott says that the downtown area of Edson is in a period of transition. “Like many communities our size, we’ve seen the big box stores that have come to town – Wal-Mart, Canadian Tire – that continue to put pressure on the local businesses,” he explains. “But I would say that our Main Street has been fairly resilient. Some businesses have left, but, overall, we continue to have the professional representative there – chiropractors, lawyers, the banking sector, and then we have kind of a boutique retail sector which has emerged there. We’re quite proud of that, although it continues to be a challenge. One of the challenges that we experienced during the boom times in our community is that rental values went quite high, and so it’s very expensive to rent space in our downtown area right now and so that also puts pressure on some of these smaller, family-run businesses. We’ve recently revamped our beautification grant, whose intent is to provide some of those local businesses with access to some funding to enhance the aesthetics of their storefronts – whether it’s new signage or planters or flowers or a fresh coat of paint.”

“We’re also starting to evaluate mixed-use core development – ground floor retail with potential residential development above,” Derricott continues. “I think conceptually we’re very supportive of that; attracting investment in that type of development is probably a little bit of a bigger challenge for us, but we’ve had lots of conversations about making our community more pedestrian friendly, in general. Recently we completed a Trail Master Plan, to include all people who choose either biking or walking as their mode of transportation. It indicated to us some improvements we can make in our commercial and downtown area to improve that type of lifestyle. I think the general evolution of our boutique-style retail sector lends itself to that kind of vibe. It gives downtown cores a real chance to rebound and generate youth into their communities. One of the things we have proceeded on is a new policy which will allow businesses to more easily create outdoor patios in the downtown area, which will get people out on the street and add a little bit of vibrancy and atmosphere to our downtown area. We’ve already had a few businesses approach us about taking advantage of that.”

Edson is also actively pursuing several energy-saving, sustainable, and “green” practices. Derricott explains: “We are in the process of having all of our street lighting changed from high pressure sodium to LED, which has become the industry standard and obviously is kind of a low-hanging fruit in terms of environmental efficiency, but also it’s just become very economical to do that. Two other things: we operate, in Edson, an airfield that has a 6,000-yard runway, which is unusually long for a town, our size, but it also produces kind of a sterile field around it. We have entered into the early stages of considering what it would look like to have a solar field installed. The value of the land, itself, is pretty much nil, but if we can produce something like a solar field in that area, the preliminary design suggests that we can produce enough power from that solar field to provide all the needs for the Town of Edson’s facilities. That’s pretty exciting and we’re looking forward to that.

“The last thing I would mention is that we are a very active recycling community, which has produced a lot of good results in terms of the types of materials that have been diverted from our landfill. And the next phase that we’re looking to go to is curbside, organic pickup. As much as 40 percent of our residential waste is now organics, and if we can divert that wet waste, which is also the heaviest part of the waste, we can really reduce hauling costs for the garbage, as well as keep it out of the landfill and treat it into a reusable material, as well. It’s become quite common and we’re looking forward to joining that trend in municipal waste management and anticipate that it will produce some positive results here in the community.”

In summation, Derricott points out some of Edson’s other attractions: “We are well situated in terms of our natural endowments,” he declares. “We have this incredible ability to interact with nature and the wilderness. Some of our recreational activities are camping and ATVing, and snowmobiling. We’re only an hour and a half from Jasper, so we get out there as often as possible. Our Edson Cycling Association is in the process of building a world-class skills track at our local nature park, just a few kilometers out of town, where people can enjoy 20 kilometers of mountain biking trails. And soon, there will be a skills and technical park for the amateur all the way up to the high skill level.

“And one of the most well-known community events in August every year is the Kinsman Club’s Slo-Pitch Tournament, which, at its height, was attracting as many as 250 Slo-Pitch teams from communities as far away as California. We have 24 diamonds and many people come to participate in the tournament, every year. It’s a really important and fun community event.”

WHO: Edson, Alberta
WHAT: A town of 8,500
WHERE: Midway between Edmonton and the Canadian Rockies
WEBSITE: www.edson.ca 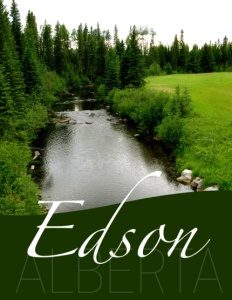