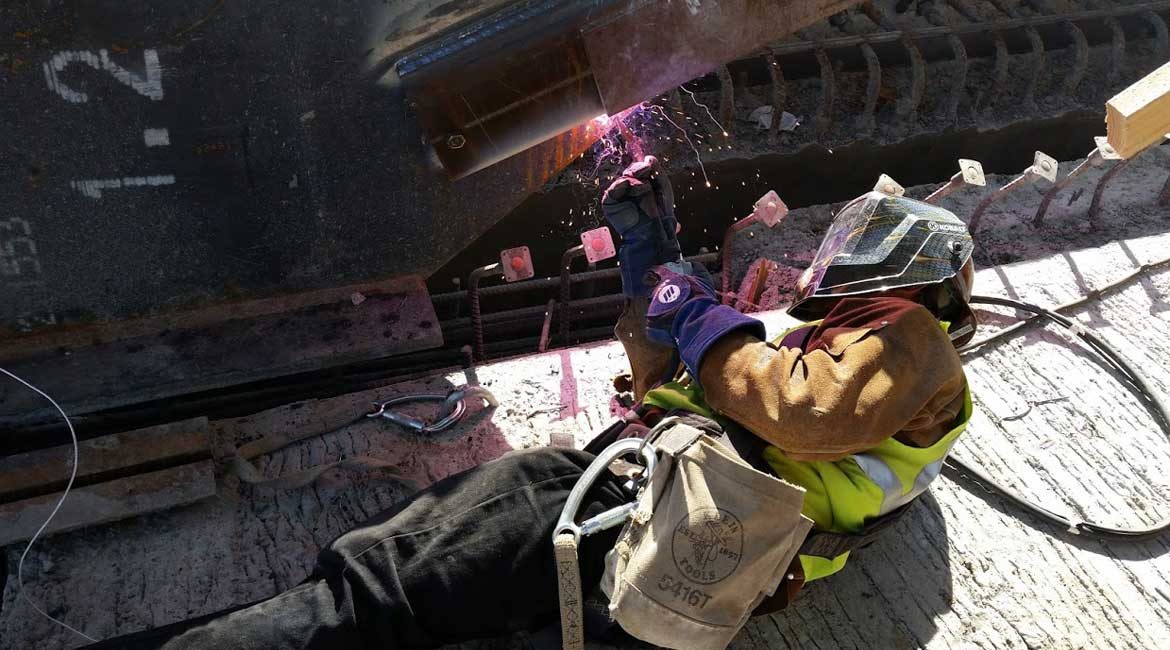 In 1972, a small group of North and South Carolina steel erectors formed a non-profit organization called the Steel Erectors Association of the Carolinas (SEAC). Focusing on the need for sharing information and industry updates, the organization grew quickly, first adding members from Virginia to become SEAVAC, and eventually representing steel erectors and associated companies throughout the United States. In1992, the group officially became the Steel Erectors Association of America (SEAA).

Tom Underhill, Executive Director of SEAA, noted, “When our group was founded in the early ‘70s, OSHA (Occupational Safety and Health Administration) had come out with new rules regarding jobsite safety for steel erectors. At the time, companies were bidding on projects without including, say, the required fall protection, just to be more competitive. Cutting corners was dangerous, and the go-to excuse was ‘I didn’t know I had to do that.’ The original SEAC members felt that having an association to share knowledge about compliance on the latest regulations would benefit everyone in the industry.”

Then, as now, the group’s mission is clear: SEAA is dedicated to advancing the common interests and needs of all engaged in building with steel. Objectives include promotion of safety, education, and training programs for steel erector trades, development and promotion of standards and cooperation with others in activities that impact the commercial construction business.

Through the years, the method of communication has evolved significantly. There is now extensive cross-country networking through conventions and trade shows; email; newsletters; a website; and SEAA’s exclusive magazine, Connector.

SEAA is a widely respected leader in training, resource development, and regulatory practices for the steel erection industry. Exclusive SEAA-produced resources include video training programs in English and Spanish, as well as guides and manuals.

SEAA is the only national trade association representing the interests of steel erectors, fabricators and related service providers. Original members were mostly open shop, independent business owners but today’s membership is a mix of both union and non-union companies.

Currently, there are 243 SEAA members nationwide, representing a broad spectrum of construction expertise. Membership ranges from small businesses earning under $3 million per year to large corporations generating more than $10 million per year. Many are award-winning organizations, recognized for their contributions to the industry, the environment, and safety. Other members include Fabricators, General Contractors, Service Providers, Specialty Services, Suppliers and Manufacturers.

Benefits are diverse, relevant, and much appreciated. “If a member company has questions about interpretation of safety regulations, etc., we make recommendations to them on how to proceed to avoid citations,” Underhill explained. “We have a close relationship with OSHA, and can advise accordingly. We also provide a valuable network of resources and information sharing on a national basis.”

In 2014, SEAA announced that its Ironworker Apprenticeship Program had been approved by the U.S. Department of Labor. The approval provides a template for SEAA member companies to establish Registered Apprenticeship programs throughout the country. Programs like these benefit SEAA members as a whole. Erectors can gain certification, and SEAA keeps an online record of course completion that workers say is a “big deal.”

Advocacy is performed on an individual basis. “If an issue comes up we will step in, but we’re not a big lobbyist group,” Underhill said. “For instance, a lot of our members own cranes and are involved in certification for crane operators. They worry about what the government will require them to do in the future. We take an active part in making recommendations and helping with the wording of regulations, so they are more easily understood. Several of our members are on AISC committees, so if an issue arises that might affect erectors, they can contact us for input on a particular situation.”

Steel erectors are classed as ironworkers. The Dept. of Labor classification lists many steel erector businesses, but some are small and work only at a certain facility. SEAA members are typically larger entities that do commercial, industrial and municipal projects.
Revenue for SEAA comes primarily from membership dues, which only recently increased after 15 years at the same rate. Additional funds come from conventions, revenue sharing with Connector magazine, advertising on the SEAA website, and sales of training publications.

Staff is minimal, consisting of the Executive Director, an Assistant, and 21 volunteer board members with exemplary experience and qualifications. Underhill noted that emphasis has never been on having an association with a large staff. “That being said, we are looking for ways to expand. Once membership reaches 500 or more, of course we will increase staff – and member benefits.”
With a rebounding economy and tightening job safety regulations, owners and contractors are looking to hire more qualified companies to do their work. They are concerned about safety and training, making sure that onsite personnel have the necessary knowledge. Underhill hopes that new start-ups will contact SEAA for training materials, so the Association can help educate them about the industry.

Steve Burkholder, SEAA President elaborated, “A long-term goal of SEAA is to overcome projected craft worker shortages in our industry by creating programs for members, so they can be prosperous and profitable long into the future.”

The main priority for SEAA going forward is to grow and improve the safety training and education component; providing the type of programs previously offered only by unions. Underhill clarified, “According to OSHA stats, 93 percent of steel erector work is done by open shop erectors; only 7 percent by union. We’re not trying to compete with national ironworking groups – in fact, they come to our convention and advertise in our magazine.”

Bottom line: When it comes to safety, ignorance is not an excuse. Underhill advises, “If you don’t know, SEAA can help. We produce and sell the books, videos and certification programs you need to run a safe, smart operation. SEAA has an interest in serving the whole industry, and we are willing to share with anyone at a minimal cost. We aren’t looking for accolades. Our board members are all volunteers. They are really helping the industry – and doing it on their own dime. When guys come to my board meetings, they pay their own way, because they love what they’re doing. This is a great group. Together, we’re filling a need and making a difference.

WHO: Steel Erectors Association of America (SEAA)
WHAT: The leading Professional Association for the advancement of steel erectors
WHERE: Head office Winston-Salem, North Carolina