A great place to come to

Lake Havasu City Airport is a city-owned, public-use airport located six miles north of the central business district of Lake Havasu City, in Mohave County, Arizona. Bordering California, Lake Havasu is a large reservoir formed by Parker Dam on the Colorado River; it’s the second most popular tourist destination in Arizona after the Grand Canyon. Lake Havasu City is known as a base for the trails in the nearby desert and the water sports on Lake Havasu. London Bridge, relocated from England, links the mainland to marinas and a looped path in an area known as the Island.

Both the city and the Airport have a storied history that traces its roots back to one man – inventor and entrepreneur, Robert P. McCulloch of chainsaw and lawn equipment fame, who was flying around California and Arizona looking for a place on which to test his marine outboard engines. He flew over Lake Mead and then Lake Havasu in the early 1960s, and on a point of land on Lake Havasu, he saw a paved emergency landing field that had seen brief use by the Army Air Corps during World War II, primarily as a rest and recreation area. 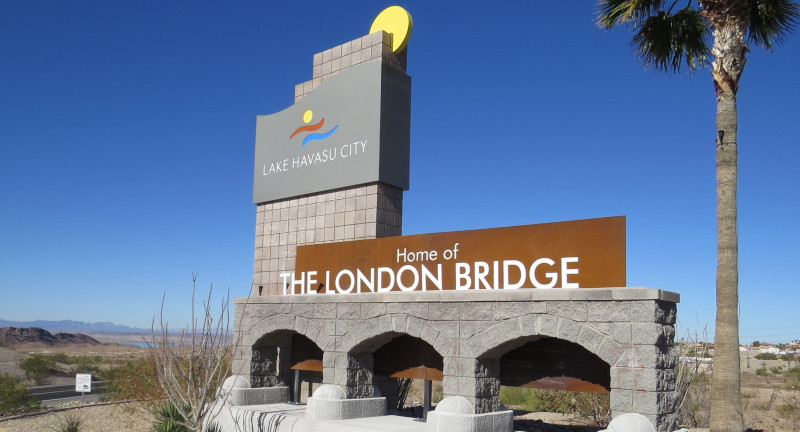 “He started the town,” explains Damon Anderson, Lake Havasu City Airport’s Manager. “He started purchasing land around the airport and by September 30, 1963, he had 16,000 acres. Then he started flying people in, targeting people from colder climates, to show them the place and convince them to move. The airport had been built in 1944 near Pittsburgh Point, and between 1964 and 1978, they had 2,700 flights that brought 137,000 potential land buyers. The last parcel of land was sold in 1978, and the city was incorporated later that year. Most came in search of refuge from big cities and to enjoy the incredible weather and the laid back lifestyle.”

The momentum continued to grow, and in 1989, land area was acquired from the Bureau of Land Management to build a new airport to replace the original one. The present-day Airport was commissioned on June 1, 1991 and was designed and intended to serve the community as a commercial service airport. It was originally equipped with entry lane approach capabilities, an automated weather observation station, a 5,500-foot runway, a taxiway, a terminal, and a maintenance facility.

During this time, commercial air service ran from the Airport to Phoenix and Las Vegas, provided by Mesa Airlines, operating as US Airways Express. This ended in 2007, and the Airport is now used for general aviation, only. “Now we are trying to build that momentum again, and create a general aviation airport that everyone wants to use,” says Anderson. “We are right in the middle of creating a new master plan, but we have also been working very hard at rehabilitation.”

Since 1991, there has not been a lot of work on the Airport and Anderson admits it is showing. The facility currently holds a B2 classification and he hopes to bring that up. However, it’s going to require work on the runways and an upgrade of the safety protocols. “I’ve got a lot of capital improvement projects going on right now,” he points out. “The main thing that we are working on is the pavement conditions of the Airport. We are in the middle of doing taxiway alpha, the main taxiway that parallels the whole runway; construction on that begins in 2020. We are also doing some cement projects for the cement in between runways and taxiways and, in 2021, we are starting on the rehabilitation of the runway, as well as the design of lighting, marking, and safety areas. Then in 2022, we will be replacing the PAPI (Precision Approach Place Indicators). In ‘23 and ’24, we have plans to rehabilitate all the guidance.”

Lake Havasu City Airport is owned by Lake Havasu City and has a staff of four – Anderson, an Administrative Assistant, and two operations people. It receives some funding from the city but Anderson says they are working hard on becoming self-sufficient.

There are 130 GA aircraft home-based at the Airport and a waiting list of over 30. “That is why we are exploring hangar development,” Anderson explains. “We put out a proposal and we are now exploring the operations in-house. We already have over 110 hangars on the field, but the city only owns 25 hangars and the rest of them are privately owned. We have one company out of California that is looking to come here and build some larger hangars to get some larger type aircraft in here, and that is one thing I am trying to shoot for.”

“There are two Fixed Base Operators on the field – Desert Skies Air and Havasu Air Center – and they have their hangars that they rent out, as well as a few tie-downs,” he continues. “They handle fueling, maintenance, and even operate a restaurant on site, the Hangar 24 Brewery and Grill. We have two aircraft mechanics on the field through the two FBOs, and one of them does just single-engine, piston aircraft, and the other does turbo type aircraft. I am trying to work with some people, right now, to set up a third FBO on the south end of the field that’s going to accommodate maintenance facilities for larger Gulf Stream type aircraft. Then our Airport would be able to accommodate any aircraft coming in, whether it’s a Bonanza or a GS 650. We will have somebody on the field that can take care of the maintenance on those vehicles.”

“We also have a lot of land here for expansion,” Anderson adds. “We are sitting on over 600 acres and probably have another 40 or 50 that are ready for development. That includes a lot of land outside the fence, designated for non-aeronautical use, and we are trying to get some businesses interested so we can capitalize on that. For example, there are a lot of businesses in the area that store boats, but there is always more need for that because space is hard to find. So, we are thinking of building a storage business outside of the fence just to house boats and different things like that for our GA community.”

“It is a great place to come to,” Anderson concludes. “We have the room for expansion and, as I say, most everything here is based on tourism. We get a lot of snowbirds coming down and it is a great haven for that. We also have a nice long runway with a 100,000-pound, single wheel-weight capacity. It was built for some very large aircraft and so we can accommodate pretty much everyone. Then there is also the fact that it is a very nice Airport and we have lots of support through the city and community to bring it up to a better operational status and to continue to develop and make it an enjoyable place for everyone.”