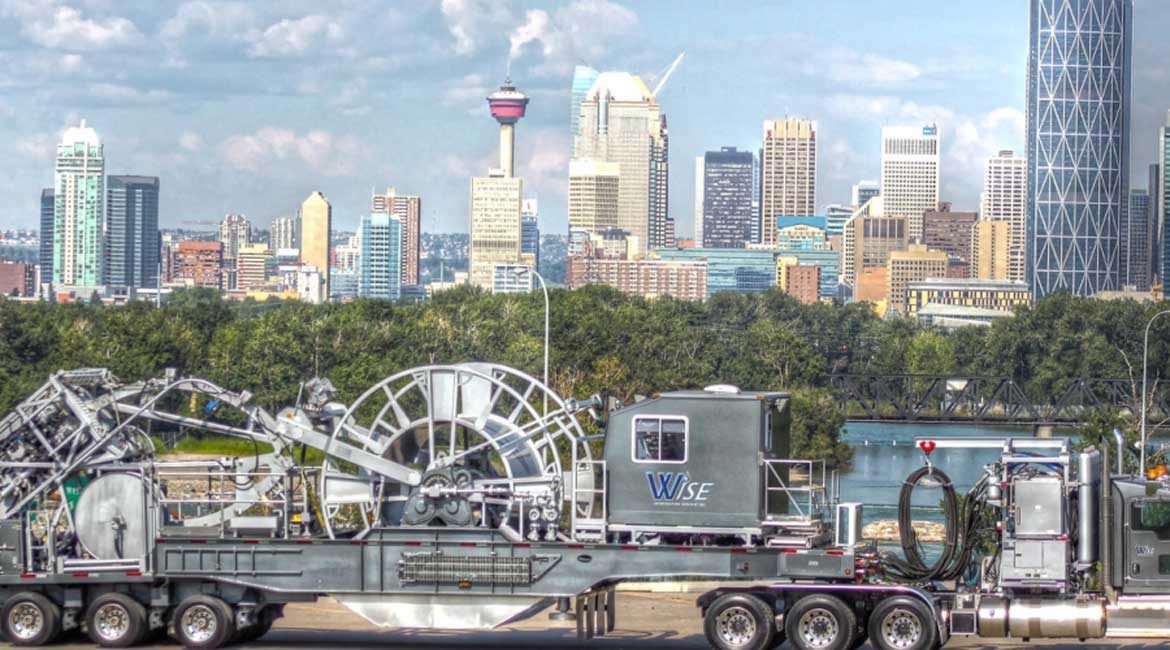 Wise Interventions Services Inc., based in Calgary, Alberta, with facilities in Red Deer, Grande Prairie, and Smithton, Pennsylvania, provides oilfield services to oil and gas companies in North America. “Our core businesses at Wise are ultra-deep, coiled tubing services, and downhole tools as it pertains to well intervention type applications in the field,” says company President and CEO, Josh Thompson, who founded the firm in 2012. “Well intervention is basically anything that is post-drilling, so we have a place to play in well completions, as well as well optimization and problem remediation, end of well life cycles in the abandonment phase, and so forth.”

“The opportunities that we had identified in the market at the time, and they’re still relevant today, was the North American shale revolution that was taking oil and gas production and well construction to unseen territory,” Thompson continues. “There’s been a challenge put on the service providers to keep up with the producing side of things; to meet producers’ expectations and help advance their well designs and production profiles as they’ve taken to pushing the envelope on shale gas and oil production. We knew that some of the older equipment that’s available to the market has a very narrow application and capacity in servicing the wells of today. That carved out our niche opportunity. So, we put some state-of-the art equipment together that is designed with all of those challenges in mind, and we have been focused on delivering a premier service offering to our customers.”

“The shale developments have been underway for a number of years,” he explains. “So, these wells that have been drilled in the shale basins are starting to reach a maturity age, where they’re requiring different types of services. And because they’re drilled to deeper depths and they’re more technically challenging, it has put pressure on the services companies to deliver those types of services and reach those goals that the producers have. Our competitive edge is that we have modern, fit-for-purpose equipment to achieve those goals, where our competition has older, legacy type equipment that is considered to be outside of the operating envelope of what today’s requirements are.”

However, even with the best-in-class equipment and technology, coupled with a team of competent professionals, Thompson reports that in 2014, only two years after launch, his company suffered what he calls “the mother of all downturns in the oil and gas sector. The market conditions have been very tough,” he laments. “Pre downturn, we were as high as 225 employees; throughout the downturn, we were as low as 50 employees; right now we are somewhere around 130 employees.”

“2017 has been off to a reasonable start,” he states, hopefully. “Although there’s a lot of damage and a lot of repair that needs to be worked out with the whole energy sector, particularly the services side, which we are making some adjustments to as we go forward. The last two years were basically two years of losses for a lot of oil shale services companies. Right now, because of market conditions over the last two years, we’re coming off of a mode where it was ‘save, save, save, cut, cut, cut.’ But we’re entering into a period where we’re seeing things that we haven’t seen for a couple of years. We’ve got some stability and activity is up slightly. For the balance of 2017, it’s getting our company into better repair and a better position to service what we believe to be the recovery that’s coming over the next couple of years.”

Some of that stability, according to Thompson, came about as the result of a decision made late last year by OPEC, the Organization of the Petroleum Exporting Countries, to regulate their production downward. “That puts the equilibrium in supply and demand on a global scale of oil production and consumption into more of a balance, which has lifted the price up a bit. That has provided for more stability in the commodity prices, which then trickles down to the oil and gas producers, as well as the oil and gas services providers, which is what Wise Intervention Services is.”

Regarding natural gas prices, Thompson believes that they, too, will begin to rise as exports, particularly from the robust Marcellus and Utica shale gas basins in the U.S., grow. “There is a lot of focus being put on the macro basis as to how to leverage North America’s gas-rich abilities and export those to the markets,” he states. “But until those exports are really in full swing and underway, we’re going to continue to see lower than preferred natural gas pricing which also has a dampening effect on the overall energy markets in North America.”

In addition, there are other challenges facing oil and gas producers, as well as their service providers, because of uncertain, and sometimes conflicting, policy goals in both the U.S. and Canada that make planning for the future particularly dicey. “We hear the rumbling on the tracks; we know that there are things happening, but we just don’t understand it,” Thompson complains. “That uncertainty is compounding the effects of what the economy could potentially be able to do in its entirety. In an uncertain period, there’s a lot of discussion with very little action. Once our governments can explain how it’s all going to work, then we can understand how to adapt. But, right now, we’re in this state of flux, which is very frustrating.”

“Where it’s having a major impact on us as a company, as well as our industry, is investment into the space,” he adds. “Investors need to have a clear understanding of their money coming into the equation, how to get it out, and what impacts are going to affect it along the way. With this uncertainty, you can’t provide that clarity. So, it is very frustrating being exposed to this. We’re doing our best and we’re having discussions on how to be prepared, but at this point that’s all we can do.”

However, even with all the economic and political uncertainties built into the oil and gas sector, Thompson remains optimistic. “We understand the challenges that are ahead of us and I tend to look at the opportunities,” he opines. “What those opportunities look like, I can’t entirely say when we have these periods of uncertainty. But I know, with my experience in the Canadian market on the oil field services side, it’s going to be the services side that is going to deliver to the oil and gas producers the technology to adapt and work with these challenges. Oil and gas won’t evaporate from the Canadian marketplace. We’re in it for the long haul and we’re looking forward to adapt and rise to the occasion,” he states, unequivocally.

“We’re a market player that survived a pretty nasty period, and we’re continuing to work for our customer community and deliver the high end service they’ve grown to expect from us. In the short-term to mid-term, we’re not going to see a big splash impact. Longer-term is where we are going to get into a more competitive position on a global scale to be able to develop our oil and gas resources in Canada. Generally, Canada has been very front-end on technology development and what I see is an opportunity for service providers to really raise the bar on how we go about delivering services and technologies, and equipment, and all the goods to our customer communities that will meet the demands that are being put on us. But, in order for our industry to really deliver and meet the conditions and challenges in front of us, we need to establish a high level of partnership within the marketplace – between my peer group, as well as our customers. It’s absolutely key to our future.”

WHO: Wise Interventions Services Inc.
WHAT: A provider of oilfield services and solutions
WHERE: Calgary, Alberta
WEBSITE: www.wiseisi.com 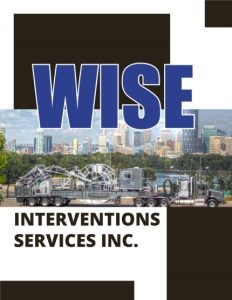