In the heart of dallas/fort worth

Bedford is a suburban city located in northeast Tarrant County, Texas, in the “Mid-Cities” area between Dallas and Fort Worth. The area’s first settlers arrived in the late 1840s, and a settlement developed in the 1870s, after Weldon Bobo moved from Tennessee and established a general store and gristmill to serve area farmers. Bobo and a group of farmers agreed to name their community Bedford, after the county in Tennessee from which many of them had come. 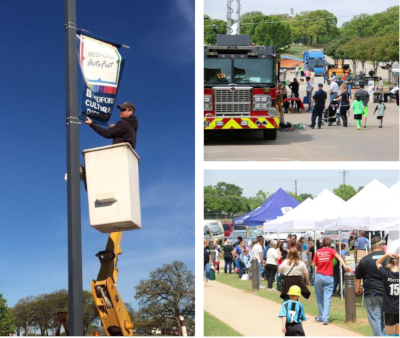 In the 1880s and 1890s, Bedford was a booming town, with a population between one and two thousand. But its early prosperity ended in the early 1900s, when two important rail lines, the Dallas-Fort Worth Interurban and the Rock Island line were built, bypassing the city. Businesses and residents moved, and the post office closed in 1909. Truck farming and dairying were prevalent from 1910 through the 1930s, but there were no more than eighty residents in Bedford as late as 1940.

Bedford’s population began to grow again slowly after World War II, because of the construction of nearby military bases and defense plants, and the opening of the Bedford Boys Ranch, a home for wayward boys aged ten to fourteen. By 1970, the town had more than 10,000 residents and in 1974, the Boys Ranch became the town’s biggest park. The decade of the 1970s saw the establishment of an industrial park, shopping centers, and restaurants, as well as the completion of the nearby Dallas-Fort Worth International Airport. The population increased to some 20,800 in 1980 and about 44,000 in 1990, with 400 businesses. Today, Bedford is home to approximately 47,000 residents and 1,800 businesses.

“One of the things that we pride ourselves on in the City of Bedford is the very business-friendly orientation,” says Jim Griffin, Bedford’s current Mayor. “We try to work very hard to cultivate new business growth and expansion in our city. One example of that is the largest Harley Davidson dealership in Texas, top five in the nation – Adam Smith Harley-Davidson. They have built a 70,000 square-foot showroom and facility that’s going to be the catalyst for a project that we’re embarking upon here called ‘Bedford Commons,’ a re-development of about 40 acres that’s going to be a combination of residential living units, restaurants, and business opportunities.”

According to Griffin, the new Harley-Davidson facility is also going to be the cornerstone of an innovative main street development, as well as the catalyst for spurring more business growth in the Bedford Commons development. Plans for the area include more walkability with better street lighting, and the construction of a few leisure and entertainment areas, all with the goal of creating a more pedestrian-friendly environment. “We’re making it all walkable and with wide sidewalks,” Griffin says. “And we can use our “main street” in the evening to provide live street entertainment, people displaying their art, and family fun activities. We want to transition from traditional architecture with large parking lots where you park and walk to a facility.”

Bedford is also in the middle of a redevelopment project of the 68-acre, Boys Ranch Park, which is home to some of the city’s main recreational facilities, as well as its Senior Center and Arts Guild. The Park is also the venue for Bedford’s yearly ArtsFest celebration and other municipal activities. “We’re in our Phase One where we’ve dredged and reshaped our lake, we’re putting fishing piers in, we’ve added a disc golf facility, we’ve added new pavilions, and a new playground structure.” Griffin recounts. “We are planning additional improvements to the park and will be working on those after we complete Phase One. There will be a grand opening for Phase One improvements targeted in March, but then we’ll also commemorate the whole aspect of the Boy’s Ranch Park with the ArtsFest in April.” The all-day event has juried art, crafts, an art marketplace, and community performances. “It’s a wonderful community event that we draw from all over,” Griffin adds.

“The other thing that we do on Labor Day – is our nationally known Blues Fest celebration,” Griffin says, proudly. “It’s a combination Blues Fest and barbeque competition. We partner with the Kansas City Barbeque Association and our barbeque competition is ranked in the top ten in the nation. We have participants from all over the country, as well as tremendous support and partnership from our business community, hospital district, school district, and city staff.” 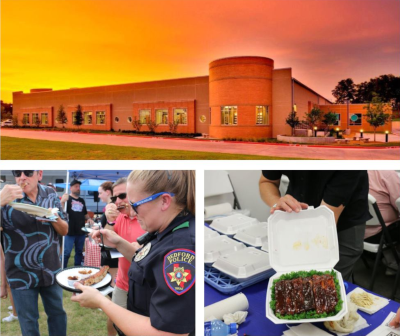 Griffin also explains how some ongoing road projects are helping the city attract new businesses, while continuing to make Bedford more accessible and user-friendly for its residents. “We’ve just completed some major highway redevelopment that took about four and half years,” he says. “We went from six lanes to 16 lanes, including the access roads. All that’s been redeveloped and redone and has spurred additional business growth along that highway corridor.” Another thoroughfare in the northern part of the city is going to be redesigned, as well. “We’re going to do a complete redesign with wider sidewalks, more greenery, and bike paths, all to enhance access and promote a green environment opportunity.”

Getting its citizens out and about is clearly a priority for Bedford’s Mayor, who is a running enthusiast, himself. “We’ve connected with IT’S TIME TEXAS, which is a health initiative to try to get our city employees, staff, residents, school district, hospital district, and anybody interested in healthy living,” he states. “One of the things that we’re going to do is join forces with surrounding cities to push toward a ‘Blue Zone’ designation, where we emphasize more healthy eating, walking, biking, and exercising.”

Once almost all but abandoned, today Bedford, Texas has become a friendly and thriving community known for its good quality of residential life, balanced with an environment for planned economic vitality.

WHO: Bedford Texas
WHAT: A suburban city of 47.000
WHERE: Located between Dallas and Ft. Worth
WEBSITE: www.ci.bedford.tx.us

Hurst-Euless-Bedford Independent School District – The Hurst-Euless-Bedford ISD was founded in 1958 when three cities kept their local governments separate but merged their school districts in order to become even more competitive and high performing. HEB ISD’s rich history of excellence is demonstrated today through International Baccalaureate, Asian languages, Spanish Immersion, Core Knowledge Pre-K, and sister schools in China and India. These international programs provide HEB ISD students a world-class education that prepares them to compete in a global economy. The District is recognized across Texas and nationwide for its superior curriculum, low teacher-student ratios, and a singular focus on instructional spending. This fine-tuned combination consistently makes HEB ISD the district of choice for families who want their children to have an academic edge. – www.hebisd.edu