Hooters, one of the most recognized brands on the planet is extending its empire.

Atlanta-based Hooters LLC is in the initial stages of a plan it expects will expand an existing 400-plus restaurant footprint significantly over the next five years, with locally-owned and operated franchise outlets driving that growth either into new markets – or back into old ones.

That blueprint would significantly change the company’s ratio of franchise-owned to corporate-owned facilities. Hooters, according to Mark Whittle, its senior vice president of global development, entered 2014 with 190 corporate-run restaurants in the United States, compared to 160 U.S. franchise restaurants and 65 more franchises internationally.

The plan would add 150 more outlets globally over five years, with 90 percent as franchises. Whittle said the lean toward more franchises and the vision of sizable growth beyond domestic boundaries boils down to a question of financial priorities.

“The international side has been a much larger growth vehicle for us,” he said. “We need to spend a lot more of our capital remodeling the stores we already have. We’re going to remodel 30 stores a year for the next four to five years corporately, and that’s certainly going to require a lot of capital.” 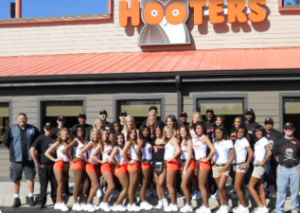 Hooters will continue to build new corporate buildings, with plans for four per year starting in 2015.

Building a store corporately requires a $6 million investment per project, with an additional $1.5 million in related costs. The company’s costs are far less when franchisees are doing the building, Whittle said.

“We want to certainly maintain a large percentage of ownership in company stores. We want to continue to grow company stores,” he said. “But the franchises will be a larger piece of the growth moving forward.”

In addition to finances, the decision to incorporate more franchises is largely a necessity of a company that does business throughout the world. Operations would not be nearly as effective, Whittle said, if Hooters were directly involved with the restaurants in all 28 of those countries.

Localized ownership results in a better experience for the customers in places like China, Brazil and Russia, for example, but the company does take significant steps to maintain a baseline of standards that are in sync with the desired overall brand.

The home office is involved with site selection and store design, and Whittle said the company strives to “reach out and touch” its franchisees several times a year, usually as often as weekly or biweekly. “We offer a large amount of support to the franchisees,” he said. “Ideally, for a customer going in to one of the restaurants, they wouldn’t know if it’s corporate or franchise-operated, because they’re done so similarly.”

There is some leeway in terms of store design as it relates to specific markets. For example, franchisee feedback from China has indicated that some restaurant elements that are successful in the United States might not be as applicable there, so deviations are allowed.

“I don’t think every Hooters has to look the same,” Whittle said. “It’s not like McDonalds, where they’re 100 percent identical in terms of this and that. We want some local flavor brought into the store with the décor and the artifacts and possibly with some of the elements of the construction.” 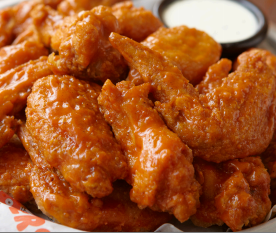 Some things, however, remain non-negotiable. Whittle said roughly three-quarters of the menu will be comprised of what the company calls “core items,” which leaves about one-quarter of the selections open to regionalization. Much of the variance comes in the form of locally brewed beers, but some food items are changed up from place to place based on specific flavor profiles of a given region, such as Asia.

Too much deviation from the core tends to get chaotic, he said, and great attention is paid to make sure the regional offerings – while different from the core – still maintain the overall standard of quality. Hooters, for example, will aim at selling “middle to high-end” seafood products, he said, rather than fish sticks.

Whittle said Hooters is taking “a more proactive approach” when it comes to identifying the right candidates, rather than simply waiting for the right person/organization to look them up.

“We’ve got room to grow in the U.S. and around the world and we’re actively out there trying to look for and identify partners,” he said. “Instead of sitting and waiting for the phone to ring, we’re out there saying, ‘OK, there are multiple-unit restaurant operators in this market, who are these guys?’ Whoever operates the Moe’s Southwest Grill or the Applebee’s or whatever in a place, they would be a fit and we try to go after them directly.

“The key element to this brand that makes it sellable is the brand awareness. One of questions that sophisticated people we talk to are going to have is ‘How strong is your brand?’ For Hooters, the brand awareness is huge. We’re right up there with Coca-Cola, Apple and Chevrolet, so, if I’m going into a new country or province it opens doors. I don’t have to educate them on who we are.”

The ideal franchisee, he said, is someone who’s operated multiple restaurants in a given market, or someone who’s entering the project with access to an experienced partner. Also key, in addition to financial wherewithal, is a desire for said franchisee to develop a minimum of three restaurants.

Among the financial specs are $1.5 million in available cash on hand, and a $2.5 million net worth.

But it’s not simply about the money, Whittle said. Instead, the proper blend is someone who is not only financially stable, but also ready, willing and able to immerse in the people side of the business.

“Someone has to be passionate about the business and the concept, and have a desire to be with people,” he said. “This is a people business and we happen to sell food. Introverts don’t seem to be successful, or, if you’re an introvert by nature, you need to have the outgoing sort of people working with you. If Warren Buffett called me tomorrow, the first question I’d ask him is ‘Who is going to operate the restaurant?’ and if he couldn’t give me an answer, I’d tell him I didn’t want his money.”

In terms of markets, Whittle said, Hooters is predominantly looking at places with populations of at least 100,000 or 125,000 with an upper-middle income base, a high preponderance of daytime activities and a residential base that’s in the driving vicinity of a mall, a theater or sports stadiums.

Existing restaurants are in the downtown sections of several major metropolitan areas, and the company has had particular success in its Los Angeles, Atlanta, Dallas and Houston markets. An in-house initiative is also under way to develop more menu options for “non-male customers.”

“The ideal customer mix is certainly a higher percentage of males, but if you go in on a Friday night there are plenty of women there and families there with two or three kids,” he said. “You want to have a mix that can appeal to a lot of people, and part of our menu development is to add things that will limit the veto votes. There’s got to be enough there as healthy alternatives for those who don’t prefer wings.”
Provided the goals for expansion are met, Whittle said, the landscape five years from now will see Hooters with at least 550 stores worldwide, with 85 to 90 percent of those stores incorporating the new prototype look that’s being rolled out this year.

Additionally, he’s aiming for a broadened demographic for the customer base – “We’re not just males with beers and a ballgame,” he said – and an elevated customer experience in each restaurant.

“We’ve taken the brand and some of the best elements of it for the last 30 years, and revitalized it,” he said. “We made it more appeal-able to a larger customer base. We’re in 27 countries (outside the U.S.) today, and by that time we hope to be in 40 countries. We’ll always strive to have an environment that’s fun. The TVs, the music, the full bar – they all add to the environment, and people like it.”

WHO: Hooters of America
WHAT: Casual restaurants featuring music, sports on large flat screens and a menu that includes seafood, sandwiches, burgers, salads and chicken wings
WHERE: Headquarters in Atlanta; corporate-owned and franchised locations in 28 countries
WEBSITE: www.Hooters.com 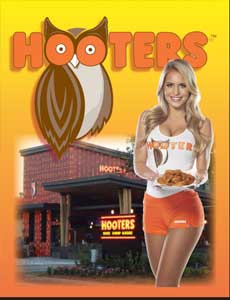