Evansville Regional Airport – The hub of the region

The Hub of the Region

Evansville Regional Airport (EVV) is a commercial and general aviation airport located three miles north of Evansville in Vanderburgh County, Indiana. The original airport, built in 1928 on 260 acres, had a small terminal, a weather bureau, a hangar, boundary lights, and two runways. The airport moved to its current location in 1989 and, today, EVV covers an area of 1,250 acres with three asphalt runways, the longest of which is 8,021 feet. EVV is owned and administered by the Evansville/Vanderburgh Airport Authority, along with a Board of Directors appointed by Evansville’s Mayor and Vanderburgh County’s Board of Commissioners. The airport authority employs 53 people with approximately 300 total employees working campus-wide in various airport services and business roles.

EVV is served by four airlines with seven nonstop routes: Delta (Atlanta and Detroit), American Airlines (Charlotte, Chicago and Dallas/Fort Worth), United (Chicago), and Allegiant (Orlando and seasonal destinations). Evansville Regional is also home to more than 40 general aviation aircraft. According to Airport Director, Nate Hahn, most of the GA hangar space is leased through the Airport’s Fixed Base Operator (FBO) Tri-State Aero. “They handle all the T-hangars and most of our multi-use hangars,” he explains. “We have land available for development and a part of our long-term planning includes providing space for pilots to build their own hangars. In addition, we have a large hangar available for lease that formerly housed a large corporate jet.” 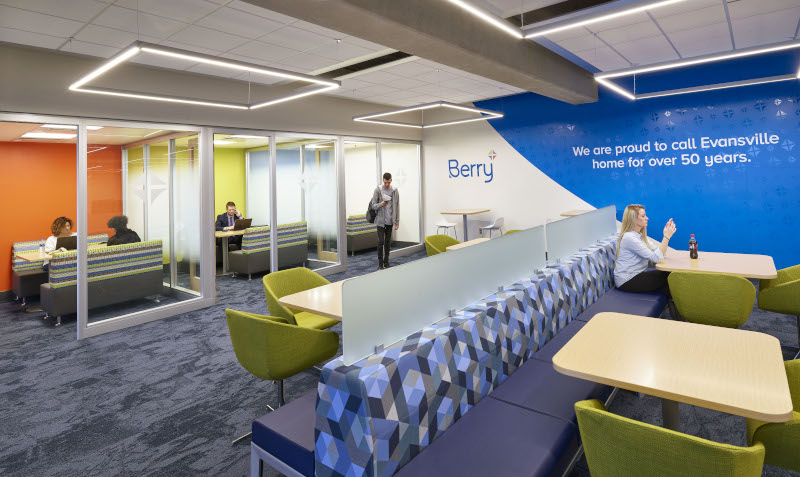 With so much acreage available, Hahn adds that in the next few months, EVV is going to request proposals from both aviation and non-aviation related developers to continue maximizing airport property. “Currently, we have two plots of land available next to the million-square-foot Berry Global warehouse that also sits on airport property,” he notes. “We have a diversified non-aeronautical tenant base, including a United States Postal Service (USPS) sorting facility, office spaces, a hotel, and restaurant tenants on land leases with the Airport, and we are continually working to develop our tenant mix further. Our available land includes various sized parcels – small and large with diversified land use opportunities. For example, some of our larger parcels could accommodate 400K square-feet warehouses or light industrial facilities. Other plots include aeronautical space that is ideal for maintenance repair operations and hangar facility expansions.”

Meanwhile, Hahn adds that the Airport has had, and continues to have, many upgrades. “I’ve been Executive Director since January and was the Director of Operations and Maintenance for seven years prior. In the eight years I’ve been here, I don’t think there’s been a second where we’ve not been under construction,” he says. One recent project was the relocation of approximately 2,000 feet of EVV’s major runway, in response to a congressionally mandated runway safety area program. “The runway relocation project was a $64-million, multi-year project. We moved a state highway, a few county roads, a railroad, and one million cubic yards of dirt.”

Another recently completed project was the $20 million airport terminal renovation, which was originally constructed in 1988. “Rebuilding the terminal is the largest project that EVV has completed,” Hahn states. “Numerous changes were made inside the terminal and out, including centralized screening, a total restaurant redesign and remodel, new skylights, carpet and lighting, as well as a new fire suppression system. We also added comfortable modern seating with more than 200 built-in mobile charging points. We created a beautiful new business lounge that is four times the size of EVV’s former workspace, in addition to a handful of other new amenity rooms, including a pet relief area and nursing rooms for mothers. Being an airport with a strong focus around business travelers, coupled with a growing leisure market, we created quality spaces that can be enjoyed by all EVV customers.” 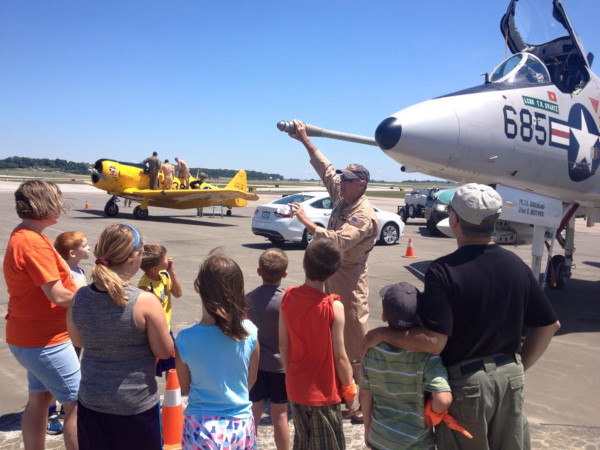 The terminal also boasts a large area for kids, which Hahn says is one of his favorite spaces in the Airport. “We partnered with our local children’s museum and library system to create a space for young passengers to play, imagine, and expel some energy before their flights,” he reports. “We have a magnetic wall – it’s an animated version of what downtown Evansville looks like, and all the buildings, people, planes, and cars can be peeled off and moved around per the young passengers’ imaginations. It’s absolutely great.”

According to Hahn, funding for the terminal upgrade project comes from several different sources, which helps EVV in keeping airlines’ rates and charges competitive. “That makes them happy and it makes us happy,” he quips. “Four years ago, a multi-county group in the state of Indiana combined for multiple projects for regional cities, and put in a bid for approximately $42 million. Southwest Indiana was one of the regions selected and the Airport’s project was the gateway project in the SW Indiana package. So, of that $20 million for the terminal, five million came from that regional cities fund and some of the funding will come from the Federal Aviation Administration (FAA) because certain project elements are Airport Improvement Program (AIP) eligible. The airport was able to cover and finance the rest.”

“On the airfield, we’ve been working on our west ramp remodel and associated drainage, and we’re close to being halfway complete,” Hahn adds. “Some of that ramp was from the 1940s, so it will be nice to complete that project over the next few years to also improve that front door to our community.” A few weeks ago, the Airport received another AIP grant of $8.9 million to support the ramp and drainage reconstruction project, which will prevent flooding and sinkhole development, and ensure unimpeded commercial operations. Another project recently completed at EVV was the addition of five jet bridges at a cost of approximately $7 million dollars. Hahn notes, “Jet bridges offer increased accessibility and protection from the weather, so they were a much needed and appreciated addition to our Airport.” 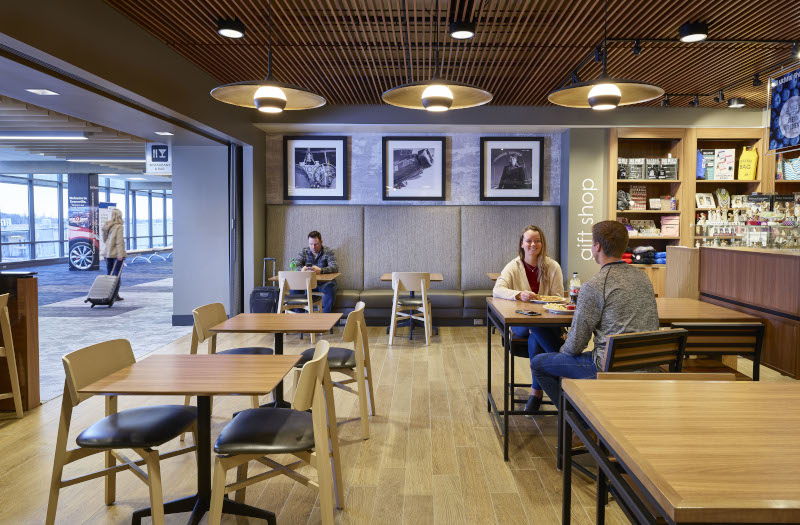 Evansville Airport serves as an economic development engine for the region and that paradigm extends to other area airports. “In our immediate community, it’s not really competition,” says Hahn. “There’s only one commercial airport. Mt. Vernon, Illinois has a general aviation airport; Huntingburg, just north of us, has a general aviation airport; Henderson, to the south of us, has a general aviation airport. So, from a corporate or general aviation standpoint, each of those serves their purposes for their communities. But we consider ourselves the economic development engine for our region – southwest Indiana, western Kentucky, and southern Illinois. Our growth directly benefits Evansville, and the regional community as a whole. This regional impact is key, and we’ve developed great partnerships region-wide. One of my goals for 2019, is to reach further out into our regional communities to make sure they understand that our growth is their growth, too, and vice versa.”

Closer to home, Hahn acknowledges, “EVV is a great community partner. We facilitate an annual 5K run on our runway which benefits a local nonprofit. Another partnership that has continued for more than three years is our partnership with the local Shriners, who do an air show every summer, coupled with our local children’s museum’s summer Science, Technology, Education and Mathematics (STEM) camp. The week of the air show, we help facilitate a week-long aviation-themed STEM summer camp, when the campers spend the first four days inside the museum learning about aviation, flight, the Bernoulli Principle of why planes fly, and building model planes. And on the camp’s final day, they visit the airport and tour our facility, meet the air show pilots and sit inside aircraft. When you meet an F-18 pilot, that’s something you’re not going to forget when you’re a kid. It’s a great example of both partnering with community organizations and trying to build that next generation of pilots. It’s one of the things I’m most proud of.”

“We also work with Junior Achievement,” Hahn continues, “bringing students out to EVV and showing them all the diverse career opportunities at an airport. If you like to work with people, we need customer service people; if you’re a fire fighter or police officer, we need those service professionals at the airport; if you’re interested in engineering, you can do that at an airport. Our point is, there are a lot of things you can do and be at an airport. We’re our own little city out here, and I’m proud of that kind of community involvement and trying to cultivate a passion for aviation within our next generation.”

In conclusion, Hahn succinctly sums up Evansville Airport’s positive characteristics: “We have a great runway, we have a great airport, and we have land available,” he declares. “That really gives us high potential for the future.”

WHERE: Three miles north of Evansville, in Vanderburgh County, Indiana

E is for everyone – eisforeveryone.com