As it turns out, green roofs are making sense for fiscal reasons as well.
Oregon-based Columbia Green Technologies worked on a building project in Seattle in which the developer was facing a $300,000 setup fee from the area storm water discharge system. The fee could be cut to $150,000, the developer was told, if one-half the storm water could be retained or managed on site. The roof installation cost $100,000, which provided a $50,000 savings from day one.

Similarly, Walmart has done nine green roofs throughout the U.S. and just completed a study that indicated the return on investment for those projects is between zero and three years.

“They’re looking out long term because the roof is going to last longer and they see the benefit long term,” said Vanessa Keitges, the company’s chief executive officer, “but they’re also seeing the ROI from a payback perspective pretty quickly as well.”

Boston-based Lux Research forecasts the green roof industry to be worth $7 billion by 2017. 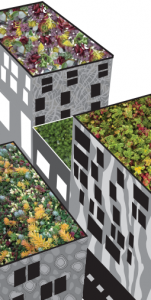 Not surprisingly, Keitges expects her company to have a stake in that prodigious uptick. She said Columbia Green has had particularly success, market-wise, within the large-scale urban environments in and around Washington, D.C., New York, Philadelphia, Chicago, Boston, Seattle, Vancouver and Toronto – all places with significant infrastructure concerns and desires to find new ways to manage them.

Ohio, Wisconsin, Kentucky and California are emerging U.S, markets, too, she said.

“I think you’re going to see a lot of consolidation in the marketplace,” she said. “Companies like ours have been able to really be a turn-key solution and wrap up all these different vendors to offer it, and I think we’ll keep doing that. We have growth plans that are very extensive that we keep hitting. We want to keep hitting the 200, the 300 percent growth, year over year. That’s our goal as a company.

“Every person we’ve hired has been a rock star in looking at companies and how to scale them – to take these to $100 million and $200 million companies. That’s what we want to do here, continue to grow like that, build profits for our shareholders and have it be recognized that green building/green companies can actually be profitable and grow. We really want to, and will be, one of those companies.”

Keitges oversees a staff of 13 for an operation based in Portland, but with sales offices in Philadelphia and Washington, D.C.

“Great minds think alike. We have a rock star team,” she said. “That’s what it takes. It’s all about the people, and we’ve got just an amazing group of people that believe in what we’re doing, and in the products and the technology and the service that we can have. It’s really what’s allowed us to grow.”

The momentum got started a decade ago when Columbia Green was created to serve the need created by Portland’s Water Bureau, whose emphasis was building green infrastructure and green roofs to manage storm water runoff along the Willamette River.

Because most of the necessary products at the time were either coming from Europe or were repurposed products initially engineered for non-green roof functions, the company set about designing and patenting technology for its own installation needs. It eventually became a full-scale product company – and Keitges and some investment colleagues purchased the business five years ago. 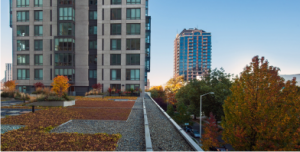 Columbia Green’s products are now sold on a private-label basis through roofing membrane companies, which means one warranty that covers both the roof membrane and the green roof system, and a single point of contact. Its partners in that endeavor include Firestone Building Products, Fiberlite/Green, Henry, Henry/Bakor, Malarkey Roofing Products, Derbigum and Kemper System.

Only 1 percent of small businesses in the U.S. have an export component, and Columbia Green is part of that select group, deriving between 20 and 30 percent of its annual revenue through exports to Canada. Toronto is an especially hot market because of a recent mandate for green roofs on new construction.

The majority of the company’s business comes from commercial development, and it’s particularly impactful as an augmentation of storm water management capabilities in cities whose underground infrastructure is particularly old. Green roofs often provide a suitable, green way to ease strain on that infrastructure because they’re ideally suited for an otherwise empty urban rooftop environment.

The more water retained by a green roof, the less that flows into aging underground pipes and creates costly leaks or inconvenient backups, overflows and floods.

“The reason the green roof market has grown year over year is because it’s empty space that these building owners can use as alternative to a retention tank by using a green roof,” Keitges said. “As more people migrate to these cities, they’re really trying to also build healthy places for people to live and work. Places where we can walk, ride our bikes, take the stairs and eat organic food.

“You’re starting to see companies changing their building environments to be able to make happier places for people to live and work, by using greenery – little parks and green roofs – in cities.” 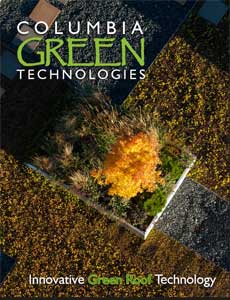