Adelbert’s Brewery blends quality ingredients, detailed approach.  It’s a great job to have, Scott Hovey advises, but don’t get the idea that it’s not real work.

Hovey is the founder of Adelbert’s Brewery in Austin, Texas, where he and a staff of 15 to 20 — depending on season — specialize in creating hand-crafted Belgian-style ales in the company’s 10,000 square-foot facility on the north side of a city bustling with positive momentum. The second-largest state’s capital was ranked No. 10 by Forbes magazine on a list of the country’s fastest-growing cities in June, and was slotted No. 11 on Travel & Leisure magazine’s list of the best beer cities in the U.S. a month earlier. 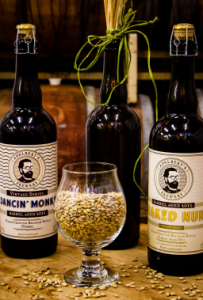 It was the latter endeavor that drew the interest of Hovey, a native of Syracuse, N.Y. who graduated from the University of Buffalo with an engineering degree in 1984 and ultimately spent 18 years in the semiconductor business before making the jump to barley and hops. The company sprang from Hovey’s long-germinating interest in brewing beers on a small scale, and it got its name as a tribute to his late brother, George Adelbert Hovey, whose tales from a life spent traveling are also the inspiration for the names of each individual beer. “We never brewed beer together,” Hovey said. “But we did drink quite a bit of it together.”

Hovey’s self-proclaimed “aha” moment came upon attending the 2010 Craft Brewers Conference in Chicago, where he was particularly struck by a brewery tour with his wife.

“I remember we were walking and we saw the casks lining the walls,” he said. “I’d been in love with the craft beer segment for years and I’d developed a love for the taste of aged beers. We drank a 6-year-old saison by Unibroue, and fell in love with the concept of making beers that will stand up to the test of time and improve in complexity.” He subsequently began writing a business plan, and, because he was able to leave his full-time job on good terms, got a few former colleagues to sign on and invest. Still, though the midlife transition was sort of abrupt, it actually fit into a longstanding plan for Hovey. “I always envisioned myself starting a business of my own,” he said. “I didn’t know that it would be at midlife and it would have to do with my love for homebrewing, but it started to make more sense the more I became a fan. My skill set was always more in operations. I’d be the guy fixing things and then breaking them again, just to fix them. This fits my personality.”

Upon fully immersing himself in the brewery culture down south, the New York-born newbie quickly discovered — much to his surprise — that the competition was far more cordial than what he’d become accustomed to in his prior life up north.

It’s not just an Austin thing, either. It’s a brewers thing. “It blows my mind, really, how supportive everyone is,” Hovey said. “Coming out of the semiconductor business, it was cordial, but that was about it. There’s competition in this, but it’s not cutthroat. We all recognize there’s a huge underserved market and I think that helps maintain the mindset that a rising tide lifts all boats if we’re all out here making good beer.”

It’s the latter point, he said, that matters most. Research by international market research firm Mintel indicated craft beer sales in the U.S. more than doubled — from $5.7 billion to $12 billion — between 2007 and 2012, with further growth to $18 billion forecast by the close of 2017. The entire U.S. beer industry was valued at $78 billion at the end of 2012. “I definitely think we’re still in an expansion phase,” Hovey said. “Slowly but surely, people are getting away from the Budweisers and the Millers and the Coors. They’re seen as your dad’s beers and noncool. Plus there’s the buy local, buy small thing going on, which is seen as really cool. We’re definitely on the radar screen these days.” The Adelbert’s wheelhouse of aged beers is actually a niche of a niche, and serves a clientele that’s typically far more interested in pairing beverages with meals than with grabbing a six-pack at the local convenience store or heading off to a college party with a party ball. 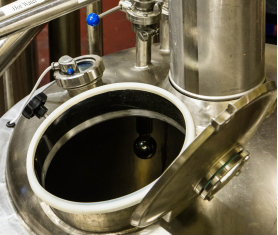 On its website, the brewery describes its process as a commitment to “brewing Belgian-style, bottle-conditioned ales for people to seek, savor and share with others. We believe quality beers require quality ingredients and a painstaking attention to detail throughout the brewing process.

“We use Bohemian old-world floor malted barley, low alpha Noble Czech hops and fresh yeast propagated at the brewery. In our seven vessel brewhouse, we use a time-consuming, multi-temperature decoction mash technique which extracts a more complex flavor from our grains.”

Adelbert’s Barrel Aged Naked Nun was a gold medalist in the World Beer Champions Awards and its Naked Nun earned a silver medal in the same competition. Additionally, its Tripel B was named a Rockies/ Southwest regional champion in the United States Beer Tasting Championship.

The brewery’s tasting room is open three hours apiece on Friday nights and Saturday afternoons and coordinates with a rotation of locally operated food trucks. A typical tasting session, Hovey said, will attract a crowd of between 50 and 150 people.

“Some of the people who come in are probably starting out a night where they’ll go to dinner and hit the bars, but it depends on the age groups,” he said. “For people my age, having two of three beers is good, and at that point you’ll want to go home.” 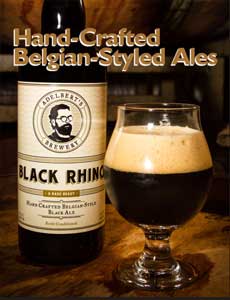