Business View Magazine interviews representatives from Azusa, CA, as part of our focus on best business practices of American cities.

Azusa is a city in the San Gabriel Valley, at the foot of the San Gabriel Mountains in Los Angeles County, California. The place name “Azusa” appears to have been derived from the Tongva place name “Asuksagna,” as the area was part of the Tongva peoples’ homeland since, at least, 55 BC. The first recorded reference to Azusa was found in the diary of Father Juan Crespi, diarist and engineer with the Portola Expedition in 1769, then on its way northward from San Diego in search of Monterey Bay.

The first Mexican settlement in Azusa was at the Rancho el Susa in 1841, a Mexican land grant from the Alta California Governor Juan Bautista Alvarado to Luis Arenas. In 1844, Arenas sold all of his holdings to Henry Dalton, an Englishman who acquired his wealth in buying and shipping goods from Peru to Wilmington Harbor, now Los Angeles Harbor, and San Francisco. On the Azusa Rancho, Dalton planted a vineyard, built a winery, a distillery, a vinegar house, a meat smokehouse, and a flour mill, importing the mill stones from France in 1854, and erecting his mill on a ranch ditch which delivered water to the south portion of his property. In 1874, Dalton imported 15 stands of Italian honey bees, considered the first honey bees imported into the United States. This developed into a large industry in the production of honey throughout the United States.

Today, Azusa is a growing city of about 50,000, with the fastest increase in population in the San Gabriel Valley in recent years. In 2018, it was also recognized as the Most Business Friendly City in Los Angeles County with a population under 50,000, by the LA Economic Development Corporation. Azusa is also tourist-friendly – it is the gateway to the San Gabriel Mountains National Recreation area, visited by millions of people every year.

According to City Manager, Sergio Gonzalez, Azusa is an eclectic community with a diverse tax base. “We’re fortunate to have not only retail and commercial, but we have a good segment of light industrial and light manufacturing, and large employers like Northrop Grumman, Rain bird, and Lagunitas Brewing Co.,” he explains. “We also have a private college in town, Azusa Pacific University, which is one of the largest employers in the city. So we benefit from having different sectors and not over-relying on one sector.”

Azusa is intent on attracting new businesses and soon a new one is coming to town. OneLegacy, a non-profit organization dedicated to saving lives through organ, eye, and tissue donation in the seven-county, greater Los Angeles area is moving from downtown LA to Azusa. “They’ve bought a building here, and they’re anticipating completing their tenant improvements by the end of the year,” notes Economic Development Specialist, Carina Campos. “And they plan to build an additional 50,000-sq.-ft. building, which will house the transplant recovery and research center.”

When it comes to attracting those new businesses, Gonzalez says that one of Azusa’s advantages is that it owns its own light and water services. “We provide electricity to all the customers in the city,” he says. “You can receive up to 30 percent reduction in electricity costs by moving into an underutilized or vacant property in the city. One of the reasons Lagunitas chose to come here was because of the high quality and competitive pricing of our water. They only have two other locations in the United States – one in Chicago and one in Petaluma, California. Their third location in Azusa will service the Los Angeles region. So, that is a very useful attraction tool.” 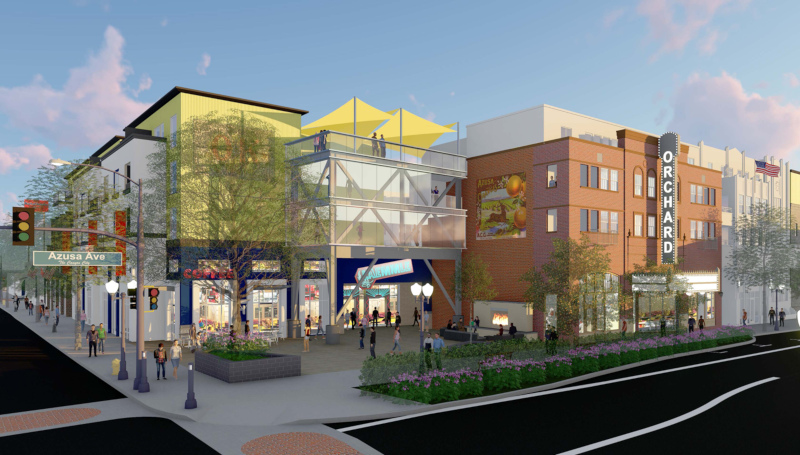 Currently, the city has two Transit Oriented Development (TOD) projects in the works, which aim to take advantage of its two Gold Line light rail stations that connect Azusa to other towns and cities in the region. One major project is called The Orchard, a mixed-use project that includes 163 residential units, plus retail and commercial amenities. “It is about a block away from our light rail station, so it’s the quintessential type of mixed-use project where you’re situated close to mass transit,” says Gonzalez. “That makes it walkable and livable. We have another project coming on line – The Avenue – which is immediately adjacent to the light rail station and that includes 127 residential units and about 12,000 square feet of retail. We consider those to be catalyst projects in the heart of the city, which will attract not only residents, but more businesses and visitors to our city.”

Gonzalez believes that a key to Azusa’s current successful growth has been the advanced planning that took place several years ago by city council, administration and lots of input from stakeholders. “It takes several years for things to come to fruition,” he declares, “and they’re really starting to come together now.”

Matt Marquez, Director of Economic and Community Development, agrees. “I’ve been here in this job for six months and I’ve seen quite a transition over the years. I went to high school in a neighboring community, so I’m familiar with the city and how it’s transformed and why it’s become so attractive,” he claims. “It’s really been the focus on the long-range planning – getting out in front of the next trends, understanding what the next wave of development is going to be, and creating those opportunities for Azusa to flourish. Azusa was stuck in the old mindset of we get in our cars, we go places, we come home, but there really weren’t a lot of opportunities for people to stay here and get the services that they needed. But over the years, those things have changed and now all those things are here and more are coming to the city. And that’s made it more of an attractive place for everyone.”

Gonzalez believes that part of being a more attractive place to live and do business is going as “green” as possible. “We see that being good stewards of the environment is not mutually exclusive to success in economic terms,” he avers. “We have a diverse portfolio of where we get our power from. We have existing solar, wind, hydro and natural gas resources and we just signed an agreement with a wind power company that will generate wind power. So, our renewables will go above 70 percent in the next couple of years, and we’re going to be exceeding the state mandate much sooner than required.”

“We’re going through a renaissance,” says Campos. “We’re transitioning into this vibrant destination point for our residents with opportunities to live, work, and recreate in Azusa.” Gonzalez adds, “Generations of families that have been here for decades are now beginning to realize that it’s okay to grow and be part of the conversation. Children and grandchildren of those living here understand that they can shape their future by getting involved and asking for new amenities that they’d like to have here so they don’t have to go outside the city.”

“Not only is that renaissance visible to people when they drive or walk through the city, or as they hear about these projects that are in the works or close to construction beginning, but also a renaissance within City Hall, as well,” says Marquez. “We’re charting a new path forward with how we approach economic development. For example, we’re making sure that processes are clear, eliminating any questions that folks may have, and giving them as much information upfront, so that they don’t have to wonder what sort of steps are next in the process. So, everything is clear as can be. It’s really been a focus of ours over the last several months.” 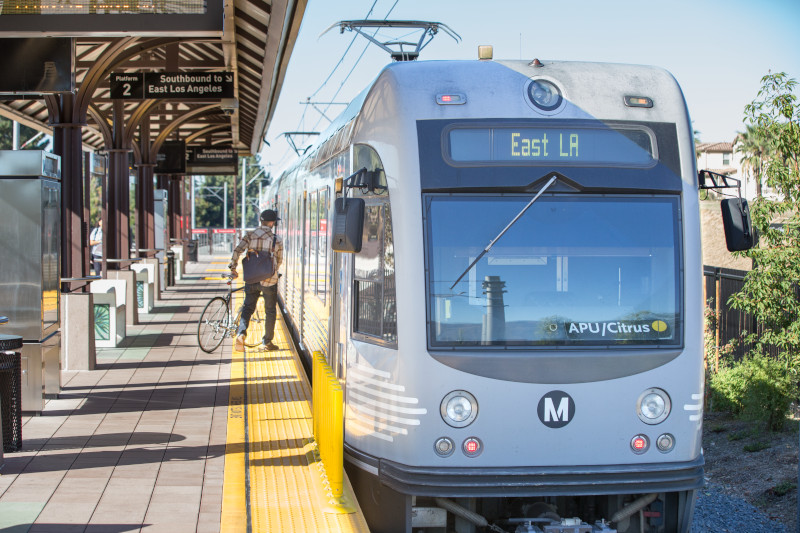 “Nothing kills a project better than delay or bad information,” Gonzalez adds. “Our job at City Hall is to make it reasonable and predictable. City Council recognizes what policies they need to introduce, or change, to increase the type of industry we want to attract here. And then, we also work closely with the Chamber of Commerce to provide the support to local owner-operated businesses, because they need to be part of the mix. It’s the small businesses that are the heartbeat of cities.”

“One of the tasks that we’ve assigned in our department, Economic and Community Development, is to look along the major corridors in the city for underutilized sites and start doing ‘economic gardening’ – figuring out ways how we can revitalize these corridors even if it’s one block or one site at a time,” Marquez explains. “We realize how important it is to do that. We understand that doing things as simple as adding more street furniture, creates more pedestrian traffic, which creates a more lively environment, and a more lively city, overall.”

“There’s a different perspective that you get when you drive a street than when you walk a street,” says Gonzalez. “There are hundreds of businesses under the radar that you probably didn’t even know were there. We want to make a connection with the current property owner, or the current business owner, and start focusing on the underutilized, vacant property; just making those connections and asking questions. Being part of the conversation goes a long way. Building relationships and trust with local businesses is key to the success of our future development.”

Wind Turbines Pictured Above: The Garnet Wind Project, Azusa’s first wind energy resource, will be supplemented with the purchase of additional wind energy from a wind power company from N. Palms Springs beginning 2022.
This will provide approximately 50% of power supply in Azusa and will increase its renewable energy portfolio to over 80% for several years starting in 2022 and 67% sustainably after 2030.

WHERE: At the foot of the San Gabriel Mountains in Los Angeles County