Quality is the mainstay

ShowHauler Trucks, a builder of custom truck conversions, is a family-owned company based in Middlebury, Indiana. It is a leader in custom-designed motor homes, motor homes with garages, toterhomes, made especially for towing race, horse, motorcycle, boat, classic car, and snowmobile trailers. ShowHauler Trucks is well-known for providing its customers innovative solutions, top quality workmanship, and industry-leading customer support.

“Everything is custom built,” says General Manager, Chad Troyer, son of the company’s founder. “Built to what an individual wants. Everybody’s got their own ideas and dreams of what they want in their RV, and we try to build that for them. A dealer has designed the unit to put on their lot, or it is sold through a dealer, built to what an individual wants. We do not sell anything direct, so an order would get turned over to the dealer of your choice, and it goes from there.”

Today, ShowHauler Trucks has 15 dealers across the county, including a new one in Idaho and one in Maryland. “So, we’ve got more presence out west and we’re a little further, northeast,” Troyer reports. “That gives us some more exposure in those different markets, and we’re on track to produce between 40 to 50 units, this year.” 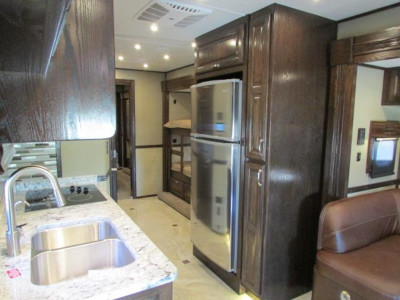 Troyer adds that, recently, the company has redesigned its interior finish shop, which had been split between two buildings, to operate, now, under one roof. “So, instead of driving the units from place to place when we would move the line, we actually drive them up on dollies on one end of the building and push them sideways until they’re completed, then drive them out the other end of the building,” he explains. “Having everybody under one roof has helped increase production, and we’re working on increasing it even more. We have 11 coaches under one roof, now.”

Troyer says that over the last few years, the coaches that ShowHauler Trucks builds have experienced several upgrades. Where once they had laminate floors and countertops, “now they’re continuing to add more and more options,” he notes. “They’re all ceramic tile floors, granite countertops, and full-tile showers – if not two. Several units are getting heat in the floor. What they have at home, they want in their coach. It adds a lot more weight, but when your platform has 58,000 pounds of capacity, and you’re only ending up using 47,000 – with water and fuel – you still have a long way to go.”

Another shift in the company’s portfolio is the type of motor coaches it’s currently producing. “Last year, we were doing garage units and motorhomes,” Troyer says. “We have yet, this year, to do a garage unit. We’ve done more toterhomes in place of the garage units. A toterhome has a deck on the back where you can haul a gooseneck or a small, mini-fifth wheel trailer. The motorhome balance is still there, but the garage units have sort of gone by the wayside and the toterhomes have taken their place.”

A current challenge for the RV business, and one to which ShowHauler Trucks is not immune, are the impending tariffs on raw materials that are beginning to drive up prices. “We’ve gotten price increases from our vendors, already, for aluminum and steel,” Troyer opines. “Our window vendor informed us of an eight percent increase in our windows with aluminum frames. It’s definitely going to slow some things down, I think. Some people that are not as monetarily set as other folks to be able to purchase one of these may shy away. Years ago, when we had the petroleum shortage, anything petroleum-based, whether it was plumbing parts, or pipe – all increased and we had to add a surcharge to our coaches. We informed all our dealers that, on every coach, there’s going to be X amount of dollars added on to each one just to cover the increase, and as soon as the waters calm and those increases come back to where they should be, we will remove that surcharge. And we did.” 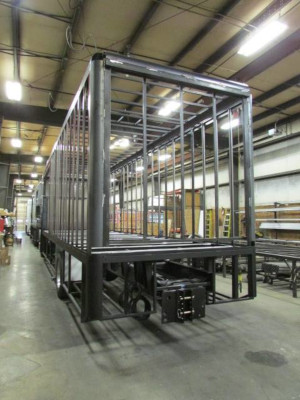 Another, and continuing, challenge is finding enough skilled workers in a market in which workers, according to Troyer, “are in the driver’s seat. In northern Indiana, there are 7,000 jobs available,” he reports. Companies are poaching workers from one another, and workers can afford to move on to better paying jobs, almost at will. “At the north end of town, another RV company was paying $40 dollars an hour, last year. This year, they’re paying $50 an hour,” he points out.

Meanwhile, some RV companies have suffered shutdowns or layoffs, recently, due, in some cases, to supply shortages, and in some cases to too much inventory and too little demand. “The depot yards were full and the manufacturers’ yards were full,” says Troyer. “So, as a dealer got stock, they already had stock, and there was a buildup of product out there. It started to slow down the orders coming in. Also, a lot of the big manufacturers couldn’t keep up with their quality. I know one company, in particular – they actually shut down their entire complex for a week to go through every unit that was sitting on the property to get quality back to where it needed to be because they had so many complaints about quality.”

Luckily for ShowHauler Trucks, neither oversupply, or poor quality are current problems for this company committed to excellent workmanship and customer satisfaction. “Right now,” says Troyer, “if you ordered a coach, we would try to get it to you next March. It’s not a bad problem to have, but it’s a double-edged sword. People are willing to wait for custom, but they’re not necessarily willing to wait that long. So, we’re trying to increase production and get more out the door. We go as fast as we can. Our quality, our fit and finish, and the way we stand behind our coaches – that is our mainstay.”

Check out this handpicked feature on Dolan Automotive Group.

WHAT: A leading builder of custom truck conversions 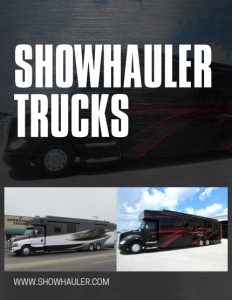