Adapting and expanding a niche market

White Lake Marine has just celebrated its 60th year in operation, having opened in 1955 on beautiful White Lake in southeastern North Carolina. It is the oldest Correct Craft dealership in the world, selling the company’s renowned brand of Nautique, inboard motor, ski and wakeboard boats. David deAndrade is White Lake Marine’s current General Manager. His parents, Carl and Diane, bought the dealership in 1985, becoming its fourth owners. According to deAndrade, his father, Carl, was a chemical engineer who had left the corporate world and one day, while looking for a campground, wound up in White Lake, where he purchased the marina and operated it for many years before handing its day-to-day operations over to his son. 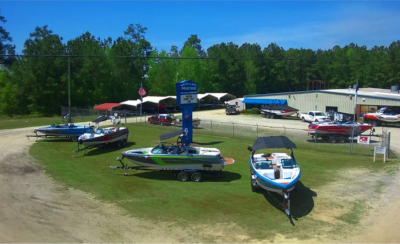 When Carl first bought the dealership, there were ten or eleven other Correct Craft dealers in the state. But, deAndrade says that his father saw a greater potential for the boat business than many of his competitors did, and that their more relaxed attitude gave their operations more the appearance of a seasonal hobby than a growing enterprise. “They had the idea: ‘We’ll park a couple of boats on the lot and if they sell, great,” he explains. “But Dad started doing boat shows and actually promoted the business. By the late 80s, early 90s, and right up until some of the soft economic times, he took it to one of the top ten dealers of Correct Craft in the world.”

Today, there are only two Nautique dealers left in the state. The other, Race City Marine, is outside of Charlotte, in Mooresville, N.C. There’s another dealer on Lake Gaston, which straddles the North Carolina/Virginia line, “but, technically, he’s in Virginia,” deAndrade quips, “so we pretty much have the marketplace from the center of the state – the research triangle, Raleigh/Durham area – east. It’s a large geographical area, when you consider we basically cover half the state of North Carolina.” deAndrade admits it can be particularly challenging serving such a large area, especially since there are only a few ski lakes across a huge swath of that land from Wilmington on the southeast coast, northwest to Greensboro.

In addition to the Nautique line, White Lake Marine also sells Moomba wakeboard and ski boats, as well as pre-owned boats from trades and consignment. “But no pontoons, jet skis, fishing boats, or runabouts,” says deAndrade. “We’re in a niche market. Most boat dealerships are not going to invest themselves so deeply in one niche. If you want a pontoon or a runabout or a fishing boat or a ski boat –they’re not going to specialize in one area. We wholeheartedly only support the inboard, ski boat and wakeboard market. We don’t work on outboards, we don’t sell outboards,” he adds adamantly.

Outside of doing boat shows to gather leads and prospects, deAndrade reveals that the company does absolutely no radio, TV, or print advertising, whatsoever, because, as he explains, with such a limited number of potential buyers out there, “we don’t think we’d get our dollars’ worth. How many inboard ski and wakeboard boats are sold in the entire world? That number is probably less than 15,000 units; where the IO (Inboard/Outboard) market is a quarter million; pontoon: the same or more. So, we’ve always seen traditional advertising as risky. Where’s the payoff?”

Luckily, White Lake Marine is a business that has always thrived on word-of-mouth. “My parents and I have always tried to view our customers as long-term investments and relationships,” deAndrade says. “So we have customers that come in – new customers – that we’ve never seen before, and normally the conversation starts out with: ‘My friend bought a boat from you,’ or ‘my parent bought a boat years ago.’ Somebody they know referred them. After 60 years, we’ve been very blessed to have built up a name and a brand recognition in our area.”

Even so, the Great Recession took a huge bite out of White Lake’s business. “Before 2008, when we had that economic downturn, we had two full-blown dealerships,” deAndrade recounts, “one here at White Lake and one just west of Raleigh, in a town called Graham. And we were selling one brand of boat, just the Nautiques, and we were pushing about 60 units a year. When the economy tanked, and the next year we sold 12 boats, we had to look at what we were going to do to stay in business. The first thing we did was we closed the younger location which had been there about ten years and retracted back to home base.”

When times are tough, the business that is wise enough and/or lucky enough to adapt is the one that is going to survive – and maybe even come out stronger than before. White Lake Marine is one business that figured out how to adapt. deAndrade explains: “What was our core competency? Nautiques – we’ve done them forever. So we took that and said, ‘What can we do?’ We had been dabbling, using our expertise and our history to sell retail customers, and even some dealers, parts for their Nautiques. We had a small web store and we sold a few orders a day and had a couple of people internationally who had found us, and we said, ‘Okay. Boats sales – our hands are tied, the economy’s not that great, right now, we can’t do anything there, but maybe we can expand the website.’ So, we did. And we have gone from keeping maybe 20 or 30 thousand dollars worth of parts in inventory to having approximately 300 to 350 thousand dollars in inventory; selling close to two million dollars a year in parts; having customers on almost every continent, except Antarctica; and almost half of our staff is devoted to keeping that side of the business going. We get tens of thousands of orders a year, now.” 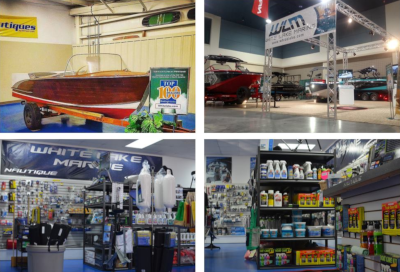 As the company began to focus more on its web business, it began to realize that, for older boats especially, replacement parts were getting harder to come by. “Factories don’t keep parts forever,” deAndrade says. “They’re focused on building new boats and marketing them.” So, White Lake Marine adapted, once again. “We have parts reproduced – decals, hardware – whether it’s from the original manufacturer, or we’ll source our own and manufacture those parts so people can keep their older boats looking good and on the water. We use local vendors. There are some dash panels that a local guy cuts on a CNC (Computerized Numerical Control) machine and prints for us; a local graphic shop. For some items that are more complex or unique, we’ll go out-of-house.”

In fact, deAndrade talks about the time he and his company went on a two-year, out-of-house, odyssey in order to supply its customers with a particularly unique item – a shift knob that Correct Craft had made for its boats for decades. “They were a beautiful, wooden knob,” he says. “Well, one day, we couldn’t get the knob, anymore. So we called Nautique and asked, ‘Why can’t we get the knob.’ ‘Well, we sold out.’ ‘Can you order more?’ ‘Nope. The vendor doesn’t have them.’ ‘Who’s the vendor?’ So, we got the vendor’s name, and looked him up; he’s out in California. So, I contact the guy and he says, ‘No, that was my dad’s side of the business and I sold all the wood turning equipment. So, I don’t have anymore.’ This is an icon of the boat; we have to have these wood knobs.

“It took two years, but I ended up finding a company that specializes in wood products and he sourced the right kind of wood and the special threaded inserts that made it through the problem, because he’s a wood turner, not a machinist. We bought 1,000 inserts – the minimum run for these threads – and then committed to this other guy to turn a minimum of 250 a year for five years, and after the first year, we sold a hundred. We bought out the rest of the run; we bought out all the inserts. It was this long, drawn-out process for a wooden knob that just costs about $24. But it’s sort of how fanatical we are about supporting our customers. The reason is: we love the boats, we really do. We love their history. I grew up in it. It’s very close and dear to our hearts.”

With the soft economic times behind them, deAndrade sees continued growth, now, for both sides of the business. Regarding its traditional, 60-year model of selling new and used ski boats, the company is trying to improve its penetration further into the Raleigh/Durham/Research Triangle area of the state. “A significant number of customers come from that market. So, in trying to expand, we’ve opened a satellite, mini-dealership that has a couple of units of inventory for people to see. Maybe we can pull those customers away from another brand,” he says.

“But I feel like we may have more opportunity in the parts side with its infinitely broad market – meaning the entire planet,” he continues. “We can’t readily sell a new ski boat to California or Alaska, but we can certainly sell a set of spark plugs with no problem and get it there within two days. Having that much reach and having that much potential for future growth – it really doesn’t have a cap. I can set theoretical caps, easily, on the boat dealership side, but there is no limit to the internet side – we’ve seen that with all kinds of very successful internet companies.”

deAndrade says that he would also like to see the parts division of the business grow in order to help bring that money back into the local economy. “We are in a remote location,” he explains. “We’re in the third poorest county of our state. It’s amazing we even sell these luxury speed boats out of here. There’s not much industry in our area, so if we can be successful and expand – I’m not putting any limit on what the future may hold and how many people we can employ,” he adds, hopefully.

Adapting its business model when necessary has set White Lake Marine firmly on its future course. “I don’t think my father ever imagined we wouldn’t just be selling or servicing boats, but we’d have an international website, shipping parts all over the world,” deAndrade says. “I don’t think that was ever envisioned at any time prior to us actually doing it. It’s different from our core business, but it’s related; it complements it. It let us use a skill set that we had in our core business and expand that to a totally new marketplace.”

Sixty years of integrity-based customer service wedded to a survivor’s ability to change course when the currents of the marketplace turned upstream, is how White Lake Marine survived the Great Recession -and came out even strong on the other side. But David deAndrade is modest about taking more than just a small share of the credit. “We’ve been blessed enough to stay in business and be successful,” is all he has left to say. 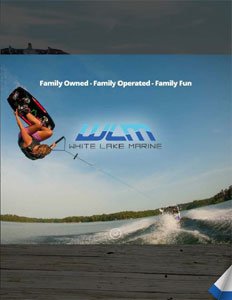