The Joseph A. Hardy Connellsville Airport – Poised for growth

The Joseph A. Hardy Connellsville Airport

Business View Magazine interviews representatives of the Joseph A. Hardy Connellsville Airport, as part of our focus on regional American airports.

The Joseph A. Hardy Connellsville Airport is a public-use airport located four miles southwest of Connellsville in Dunbar Township, Fayette County, Pennsylvania, serving the south-eastern segment of the Pittsburgh metropolitan area. The Airport first opened in 1938, a cooperative project between the City of Connellsville, Fayette County, and the Federal Works Progress Administration (WPA) Program. It was heavily used during World War II by the United States Army Air Force Air Technical Service Command as a sub-depot of the Middletown Air Depot near Harrisburg.

During the war, the government greatly improved the Airport’s facilities. The 805th Army Air Forces Specialized Depot, which opened on July 1, 1941, repaired and overhauled aircraft and returned them to active service. With the winding down of the war effort during the summer of 1945, the Air Force closed its facilities. The Airport remained under federal government control from 1941 until July 1947, when it was returned to the city of Connellsville, stipulating it be used for public purposes.

Connellsville Airport also served as the site of a Taylorcraft airplane maintenance facility where Taylorcraft airplanes were built and/or repaired in the late 1940s and 1950s. The current main terminal site is the remnants of the Taylorcraft hangar. The United States Marine Corps (USMC) Reserve also had training areas on the Airport in the 1950s. By the 1960s, the Connellsville Airport had three paved runways, one of approximately 3,400 feet and the other two at 3,000 feet. Of those three, only two survive today. The Fayette County Airport Authority (FCAA) was established in December 1965 to take ownership and management of the facility.

The Airport fell into relative disrepair in the 1980s and 1990s due to poor pilot usage and lack of operating funds. However, over the past several years, it has bounced back. In 2007, it was renamed the Joseph A. Hardy Connellsville Airport, in honor of lumber magnate, Joseph A. Hardy, who donated $1 million to help defray the $2.3 million cost of building new hangars. “We wouldn’t be where we’re at right now, if it wasn’t for the generosity of Joe Hardy,” says John “Bud” Neckerauer, who became Airport Manager in 2013. “It made a big difference.” 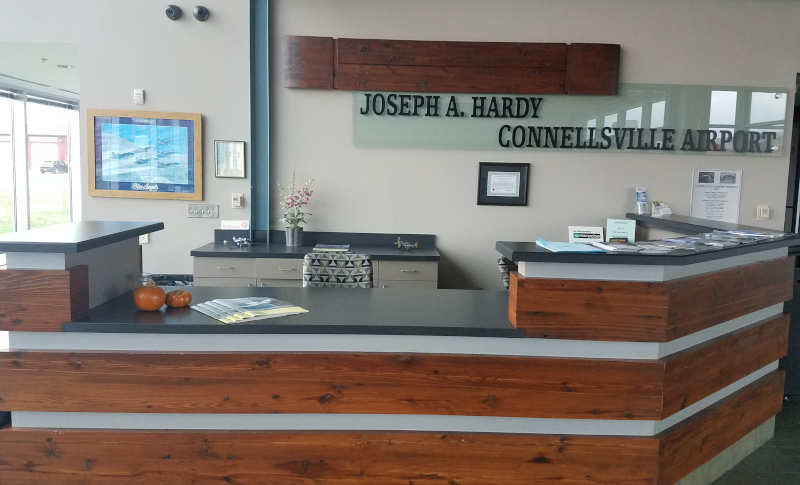 Today, the Airport is self-sufficient and receives no money from the county, relying solely on hangar rent and fuel sales to support its operations. The general aviation facility has 64 home-based aircraft and there is a waiting list for hangar space. “We’re in the process of putting the money together and we should be building another six-hangar unit, next year,” says Neckerauer. “There are also three privately-owned hangars on the Airport,” he adds, “and if somebody wants to build a hangar, we wouldn’t turn them down.”

“The county is assisting the Airport Authority in applying for grants, one of which has been tentatively awarded and that is through the Appalachian Regional Commission for $200,000,” adds Derrick Crane, Director of Operations at R. W. Sleighter Engineering, the Airport’s contract engineer. “They’re currently applying for a grant through the Pennsylvania Department of Transportation’s multi-modal grant program. And that will be for 70 percent of the funding for hangar construction.”

Other Airport tenants include:

Another major tenant at Connellsville Airport is Air Travel Management LLC, whose Chief Operations Officer is Mark Shipley. “We used to be at Morgantown Airport which was receiving commercial service,” Shipley recounts. “We actually helped them get some of that commercial service back, and maybe, shot ourself in the foot because it made the airport a more expensive place to operate and for general aviation, it made it a harder airport to get in and out of because of the control tower, TSA, and some other restrictions. So, we moved our operation to Connellsville around 2008. At that time we had one airplane and one flight school plane and we did a little bit of maintenance. Now, we’re a Part 135 air charter operation; we do charter, air ambulance, and cargo work. We manage close to 12 corporate aircraft. We’re also a Part 145 repair station, doing both avionics and regular mechanical maintenance. We house the airplanes for our customers; we also supply them with pilots, all their maintenance, and every aspect of their air travel. We also do a fixed-wing ambulance program. Stat MedEvac has the helicopters – they pick up the seriously injured and take them to hospitals in Pittsburgh. We do more of the long-term rehabilitation, transplant, and things of that nature. We supply all of our own medical crews, which a lot of the fixed-wing companies don’t do; we supply our own paramedics, respiratory therapists, doctors – whatever that particular trip may need, and we have people on call 24/7.”

“We’ve done this through the expansion of Connellsville and thanks to them getting some other hangars built that we rent,” Shipley adds. “We also, recently, purchased one of the hangars that was privately-owned on the Airport. We also rent a large, former FBO hangar, there. So, we do a lot of activity. We’ve been able to grow because of the Airport growing and the present management that has helped bring other companies in there for us to take care of.” 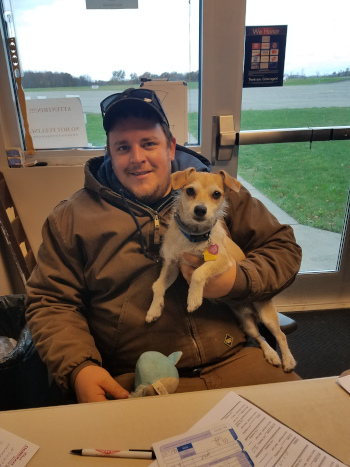 Going forward, Crane says that the Airport’s 12-year Master Plan has several ongoing maintenance and runway improvement projects on the books. “If we look at the bigger picture, though, there is a great desire to extend the main runway – currently it’s 3,833 feet,” he notes. “The Master Plan recommends an extension out to 4,400 feet, and the Airport has commissioned a study that looks at demand and has warranted an extension to 5,500 feet for the larger corporate aircraft.”

“We hope the runway extension is part of the Airport’s plan, because we have companies that we work with that have larger aircraft and we can’t get them in with the present runway,” says Shipley. “We also are expanding our services, hopefully into some jet services, and with the aircraft we’re looking to purchase, we can bring the airplane in here, but we can’t have it leave with people. It’s minimum fuel and minimum crew, and it has to go to one of the neighboring airports to buy fuel and have our charter people meet us there. So, we’re definitely hoping that the Airport works towards expanding, not just the runway, but other facilities. They do a great job with what’s there now. But as we all grow, we need the facilities to grow, as well, so that we can all grow, together.”

Another potential growth opportunity for the Airport is an – as yet unoccupied – light industrial park right next door. “It’s about 100 acres,” says Crane. “Currently, it doesn’t have any tenants, but it is some prime property that can be developed that’s immediately accessible to the Airport.”

WHO: The Joseph A. Hardy Connellsville Airport