A lot going on

Lubbock Preston Smith International Airport, the 9th busiest airport in Texas, is located five miles north of the City of Lubbock. Originally named Lubbock International Airport, it was renamed in 2004 for former Texas governor, Preston E. Smith, an alumnus of Texas Tech University. The facility began as Lubbock Municipal Field in 1929, and the Airport’s first manager was aviation pioneer, Clint Breedlove, who had been an army aviator and test pilot.

The United States Government’s War Department took over the Airport in 1942, and created the South Plains Army Airfield. This installation’s mission was to train combat glider pilots, whose gliders were designed to carry soldiers, small jeeps, cannons, or other supplies quickly and quietly into the heat of battle. These “silent wings” were used extensively in the D-Day invasion to free Europe and also in many Pacific Theater operations. The South Plains Army Airfield grew to be the largest glider training facility in the world. 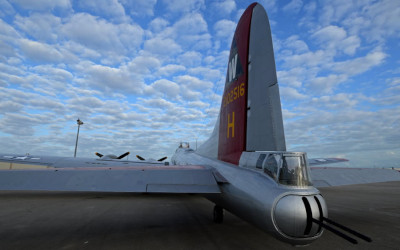 Military use of South Plains ended on December 1, 1947, and the Airport was returned to the local government for civil use. Commercial airline service began in 1945 with a flight to Dallas operated by Braniff Airways. Pioneer Airlines, Continental Airlines, and Trans-Texas Airlines soon began serving Lubbock, as well, and a new terminal was built in 1950. In 1966, Continental Airlines was the first to bring jet service to the Airport and soon Braniff and Texas International followed. In 1976, a new passenger terminal was dedicated which was expanded to its present size in 1986.

The Lubbock Preston Smith International Airport covers 3,000 acres and has three runways, 156-based aircraft, and sees approximately 80,000 operations a year. It is owned by the City of Lubbock, which employs 49 full-time workers, and is 100 percent self-sufficient. Currently, the Airport is home to two freight airlines: FedEx and UPS, and three commercial passenger airlines: American, Southwest, and United. The Airport also hosts two full-service FBOs – Lubbock Aero and Chaparral Jet Center; an avionics company – Condor Avionics; a flight school – Hub City Aviation Academy; and a few other non-aviation businesses.

According to Lubbock Preston Smith International Airport Director, Kelly L. Campbell, the last decade has seen some major capital improvements to the airfield’s runways at a cost of approximately $100 million. “The two commercial service runways used to intersect,” she reports. “So, about ten years ago, the FAA made the determination that we had to de-couple those runways. The north/south runway is 11,500 feet and the east/west runway is 8,003. When we de-coupled, we moved the east/west runway 2,000 feet to the east. So, it didn’t change the length of the runway, it just relocated it – we demolished one end and expanded it on the other and then completely rehabilitated the whole length of it. We also extended the parallel taxiway. When we finished that project, we moved to the north/south runway and completely rehabilitated the outboard sections of it – the keel section was rehabilitated in the ‘90s, so it was still in good shape.”

“The two runway projects were majority funded with FAA grant funding,” Campbell continues. “Those two have a local match with passenger facility charge revenue. The east/west runway was a 95/5 split; the north/south runway was a 90/10. So, that was a significant investment and that doesn’t include some improvements to our general aviation aprons and taxiways, which were funded with airport revenues – asphalt and pavement work around the fuel farms, the apron, and the T-hangars on the west side. We also completed another million-dollar apron rehab on the east side.”

Future capital projects over the next several years will concentrate, initially, on the Lubbock Preston Smith International Airport’s terminal building. “It opened in 1976, and even though we’ve done some minor renovations, rehabilitations, and replacements over the years, it needs a facelift,” Campbell avers. “So, the focus, right now, is on the terminal building; that will be followed by a project to replace the existing fire station. Those are the two biggest projects. We have a Master Plan that was done in 2007, and there are several airfield projects on it that are still viable – but if I had to guess, today, I would say that it could be a cargo apron expansion. We have a very strong cargo operation with FedEx and UPS. FedEx is actually our second largest operator in terms of landed weight, behind Southwest. Almost all of the existing cargo ramp is leased and being utilized. So, that’s where we would hope to see some growth and some potential.” 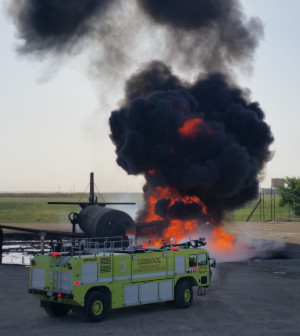 Regarding GA traffic, she explains each small local GA airport has advantages and disadvantages. “From a GA perspective, some of the smaller airports – hangar space is cheaper, fuel is cheaper, so there’s some competition there. But, it just depends on what the pilot is looking for. To one person, being at an airport that has perimeter fencing and badging is a huge benefit and brings peace of mind for the security of their aircraft. For somebody else, that’s a big hassle. But certainly, from an operations standpoint, even if that aircraft is not based here, and even if they don’t fuel here, or use maintenance, our 24-hour tower is a huge plus and there’s customs service here specifically for general aviation; and the two commercial service runways. The smaller GA airports don’t have the same type of infrastructure.”

In addition to its current amenities, Campbell believes that the Airport’s location, plus the availability of land, makes it an attractive option for future development. “We’re about seven miles from downtown Lubbock, and we’re located right off the interstate, so there’s great access,” she states. “The Airport is about 3,000 acres and so there is a lot of opportunity to develop out here. We’ve invested a lot in our infrastructure, so we should be set for another 25-30 years with only routine maintenance. There’s a lot of land available for development for general aviation and for private hangars. There’s also a lot of opportunity for MROs, and other aviation-related businesses. We have very strong winds here; that’s why we have the two commercial service runways. The 8/26 is a crosswind runway, so as you look at that from a pilot’s perspective, it’s great for training.  And we’d love to see that continue.”

Check out this handpicked feature on Spartanburg Downtown Memorial Airport – History and community. 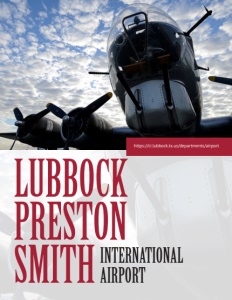