A Town in Transition

Business View Magazine profiles Bathurst New Brunswick , a city of 13,000, in Gloucester County at the estuary of the Nepisiguit River.

Bathurst New Brunswick, Canada, is a city of approximately 13,000, situated at the southernmost part of Chaleur Bay, on Bathurst Harbor, an estuary at the mouth of four rivers: the Nepisiguit, the Middle, the Little, and the Tetagouche. Chaleur Bay – “The Bay of Warmth” – was so named by Jacques Cartier, the first European to visit the area, in 1534. Permanent settlement in the region dates back more than 350 years, when, in 1619, the first missionaries arrived and established a Récollet Mission on the shores of Nepisiguit Bay. First called Nepisiguit, then St. Peters, Bathurst received its current name in 1826 after then-British colonial secretary, Henry Bathurst, third Earl of Bathurst. Today, Bathurst is officially a bilingual municipality with French, Irish, Scottish, and English heritage.

The Bathurst New Brunswick area has thick woodland with multiple bodies of water. As a result, shipbuilding, logging and sawmills formed the basis of the local economy during the 19th century, when the community emerged as a regional trade hub. Farming and fishing remained the mainstay of its outlying rural communities. In 1871 Bathurst had a population of 600.

By the turn of the 20th century, Bathurst New Brunswick had become a busy seaport, and a port of entry on the Intercolonial and the Caraquet and Gulf Shore Railways. It had a post office, 35 stores, six hotels, a steam sawmill, a shingle mill, a flour mill, three fish freezers, two carriage factories, a printing shop, three churches, and a population of 3,000. It incorporated as a town in 1912.

Pulp and paper dominated the local economy during the early decades of the century, after the Bathurst Power and Paper Company opened the city’s first pulp mill in 1914. It quickly became Bathurst New Brunswick’s largest employer and brought prosperity to the entire region. The mill was expanded to make paper in 1923. It employed hundreds of people when it ceased operations in 2005.

By the 1960s, base metal mining had overtaken pulp and paper as the driving force of the local economy. Significant lead and zinc deposits discovered in 1953 in the surrounding region further spurred the city’s development. The Brunswick Mine began production in 1964 and quickly became one of the largest, and most profitable, of its kind in the world. It was also northern New Brunswick’s largest private sector employer. When it closed 50 years later in 2013, it had employed over 7,000 people, including 700 during its final year.

Today, Bathurst New Brunswick is a town in transition. “It was easy for us in the last half century because of the large industries that were in our city,” says Mayor Paolo Fongemie. “Now we have to reinvent ourself.” A major part of that reinvention consists of taking advantage of the area’s natural beauty. “We have a bay, we have beaches, we have rivers, we have mountains, and we have trails,” Fongemie explains. “We’re going to start promoting our region as the outdoor capital of the Atlantic.” To that end, a regional tourism office is being created within the area’s Regional Service Commission, set up by the Province of New Brunswick to deal with zoning, planning, and waste management. “That’s a big step moving forward in regards to our region taking responsibility for our own development,” the mayor adds.

“We’re trying to position our assets,” Fongemie continues. “We have 40 kilometers of trails within the city limits; we’re restoring an old Migma Indian trail from Mt. Carleton Provincial Park to the Bay of Chaleur – a 140 kilometer trail. We had a ‘trailathon’ this fall where people ran in the woods, biked, and did some kayaking. It was a two-day event and it attracted a lot of people from outside the Province.” Bathurst is also one of five stops on the Northern Odyssey, a loop of magnificent groomed snowmobile trails covering over 1500 kilometers in Northern New Brunswick. It is also home to the international Xtreme Race CCNB, a downhill skating challenge that is now part of the Riders Cup circuit, a qualifier for the Red Bull Crashed Ice events.

Fongemie adds that Bathurst is also putting a lot of effort into becoming more attractive to a younger population, which includes making its downtown as lively as possible. “We’re one of the oldest cities in the Province,” he says. “We have an average age close to 50 years old. So, that means we have to change our mentality as a city. There’s a great opportunity for young families and young adults to come in and get a great house at a cheap price. We’re a blank canvas and whoever wants to paint on it has the ability to do that in our region. So, we’re trying to empower that younger generation of Millennials to seize that golden opportunity.”

Fongemie was elected mayor this past year, along with an entire new city council made up of people with a wealth of management and business experience. Together, they believe that Bathurst is a resilient community on the verge of forging a new identity and transforming itself into a younger, more modern town with a new brand based largely on its availability of outdoor activities.

“Right now, there’s a big movement with multiple actors ‘blitzing’ in the same direction,” Fongemie states. “There’s momentum with the Chamber of Commerce, and local economic agencies, and local businesses, and the college, and the city, to transform our community into an entrepreneurial one. Having lost a large industry, we’re starting to rise from the ashes while positioning ourselves as a city that’s embracing innovation, progression, and an open mind.”

Check out this handpicked feature on Campbell River, British Columbia – An economic renaissance.

WHERE: In Gloucester County at the estuary of the Nepisiguit River 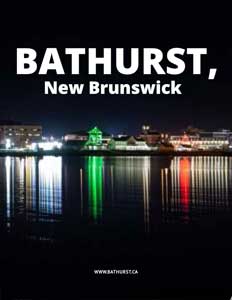